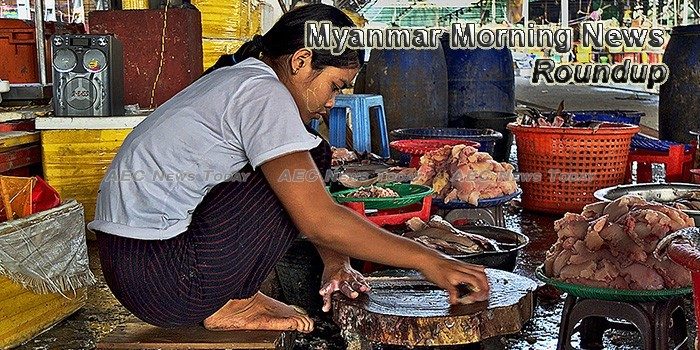 Russia dismisses US concerns over Myanmar fighter jet sale
Moscow will not pay attention to concerns from Washington regarding the humanitarian implications of a sale of fighter jets to Myanmar, the Kremlin said on Friday.
— Asia Times

‘There is no peace’: traumatised Rohingya vow they won’t go back to Myanmar
They burned my house and my whole village, they stole my crops,” Nagumia says. “I saw them throw the young children, and the old people who could not run, into the fire. They cut people’s throats and their bellies and left them to die. I cannot go back. What am I going to go back to?”
— The Guardian

Myanmar advisory panel chief says it cannot interfere in court case against reporters
Myanmar’s panel of international advisers on Rohingya issues will not get involved in the case of two Reuters journalists charged with violating the Official Secrets Act, its chairman told a state newspaper in an interview published on Monday.
— Reuters

Myanmar LGBT festival goes public for first time
Fluorescent wigs askew and leaving broken stiletto heels and a cloud of glitter in their wake, Myanmar drag queens pounded across the finish line and crashed into a waiting coterie of photographers at a groundbreaking festival.
— Channel NewsAsia

Nearly 40 Myanmar Students Dismissed From Schools Following Budget Protest
Around 40 students enrolled in universities around Myanmar have been dismissed from their classes after they joined in a protest calling for an increase in the country’s education budget, with some vowing to stay out of school rather than promise not to protest, sources say.
— Radio Free Asia

Surakiart an old friend of Myanmar’s military
Re: “Surakiart slams Richardson over attacks on Rakhine advisory board”, Asean+, January 27.
— The Nation

FDA to use QR code in approvals
The Food and Drug Administration (FDA) has discussed with food producers on using QR codes to describe the organisation’s approval on products.
— Eleven Myanmar

Since 2016, Myanmar Courts Have Convicted 100% of People Charged Under Telecom Law 66 (d)
In 2016-17, every person charged under Section 66 (d) of Myanmar’s Telecommunications Law was convicted and sentenced to prison.
— Global Voices