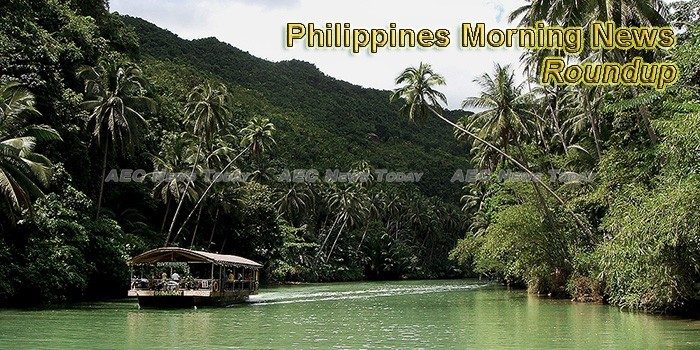 Plastic Battle’s plea: Ditch single-use bottles, go for refills
Digital nomad Bryan Madera was on an indefinite sabbatical, or “seabbatical” as he calls it, when he decided to do volunteer-for-accommodations last year at a hostel along the famed Twin Beach in Barangay Bucana, El Nido.
— Rappler

900 ‘e-trikes’ deployed in Manila
Starting this month, a total of 900 “e-Trikes” will be plying the streets of the four Metro Manila cities under a government programme to transition towards “cleaner” transport alternatives.
— Gulf News

$7.5-B tripartite broadband project gets going
The power lines-anchored national broadband project of the Philippine government that will command multi-phase investments totaling US$7.5 billion will finally make headway with the scheduled signing of the tripartite agreement on this venture this week.
— Manila Bulletin

Aquino, Garin face criminal raps on Dengvaxia
FORMER President Benigno Aquino III and two former Cabinet officials are expected to appear before the Justice department for a preliminary investigation on a criminal complaint over alleged anomalies in the P3.5-billion anti-dengue program.
— Manilastandard.net

PAF allots P53.5-M for ‘Huey’ parts
The Philippine Air Force (PAF) is looking for suppliers of structural, hydraulic, rotor and flight control systems needed for the repair and maintenance of its one of UH-IH/D “Huey” combat utility helicopters.
— Philippine News Agency

Inflation likely hit 4.9% in May
Inflation rate in May likely accelerated to a new five-year high of 4.9 percent from 4.5 percent in April, driven by higher food prices on supply problems, the Finance Department said over the weekend.
— Manilastandard.net

Smart City Spotlight: Manila
The capital of the Philippines; Manila is the world’s most densely populated city with 42,857 people per square kilometre.
— The Asean Post

Needing big-ticket investments, Rodrigo Duterte turned to China. The Philippines is still waiting
At the heart of Philippine President Rodrigo Duterte’s foreign policy is the pursuit of a golden age of bilateral relations with China.
— South China Morning Post

Employment app launched, targets one million jobs
A NEW mobile application has been launched with the aim of creating a million job opportunities by 2022.
— BusinessWorld Online

[OPINION] U.S. Indo-Pacific strategy: What’s in it for Philippines?
In his speech at the 17th Shangri-La Dialogue in Singapore, US Defense Secretary James Mattis declared what he describes as the Trump administration’s “whole-of-government” Indo-Pacific strategy.
— Rappler

Calida got P7.5M in excess pay
Some officials of the Office of the Solicitor General (OSG), including Solicitor General Jose Calida, were paid honoraria or allowances that exceeded 50 percent of their annual basic salary, the Commission on Audit (CoA) said.
— The Manila Times

‘War resumes if peace talks with Reds fail’
WEEKS before the expected resumption of peace negotiations between the government and the Communist Party of the Philippines-National Democratic Front, President Rodrigo Duterte said he is ready to “resume the violent war” if the talks in Oslo fail.
— Manilastandard.net

PH, Japan closer to agreement on workers’ social security
The Philippines and Japan have exchanged diplomatic notes on the completion of constitutional requirements for an agreement between them on social security.
— Manila Bulletin

Duterte eyes purchasing Bell choppers from SoKor
President Rodrigo Duterte said Sunday the Philippine government is considering the purchase of Bell helicopters from South Korea to boost the capability of the Armed Forces of the Philippines.
— PTV

Philippines eyes greater regulation of Islamic schools
The Philippine defense secretary said Sunday that authorities there will standardize teaching in both public and private Islamic schools in the wake of a militant siege last year that raised fears of greater radicalization in the country.
— Arab News