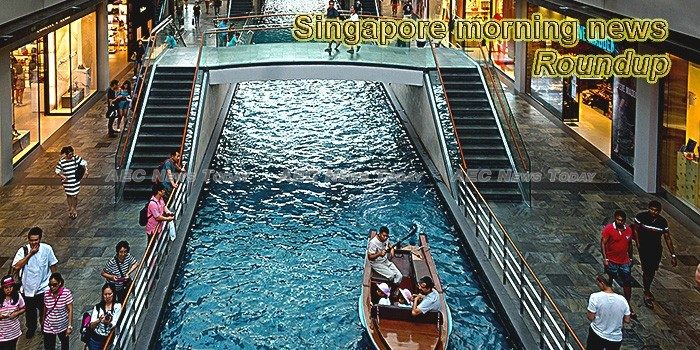 Higher spending fails to boost retail rents from protracted slump
Even as locals stepped up their festive purchases ahead of discounts offered before Hari Raya Aidilfitri and businesses jumpstarted their expansion plans, Singapore’s retail rents remained in negative territory after slipping 1.1% in Q2 and reversing the slight 0.1% growth booked from the previous quarter, according to real estate consultant Savills.
— Singapore Business Review

Lease Buyback Scheme to be extended to all HDB flats, including 5-room and larger ones: Lawrence Wong
The Lease Buyback Scheme (LBS) for Housing and Development Board (HDB) flats will be extended to cover five-room units and larger ones, said National Development Minister Lawrence Wong, as the Government announced concrete moves to help seniors unlock the value of their flats for retirement.
— TodayOnline

More than 33,000 sign up for PayNow Corporate | Video
PayNow Corporate has been in operation for a week and according to the Association of Banks in Singapore, 33,185 have signed up as of Sunday (Aug 19).
— Channel NewsAsia

NDR 2018: Why are HDB leases 99 years long? PM Lee explains
The prime minister said that HDB flats must be returned to the state after 99 years for the sake of future generations and for social and practical reasons.
— Channel NewsAsia

‘To understand Singapore, head to a hawker centre’
In naming it as Singapore’s nomination for Unesco’s Intangible Cultural Heritage during Sunday’s National Day Rally, Prime Minister Lee Hsien Loong spoke of hawker culture being a unique part of Singapore’s society, heritage and identity.
— The New Paper

Luxury cruising and environmental responsibility meet in Halong Bay
Taking in Halong Bay’s sights on a luxury cruise ship is certainly one way to live it up. Imagine the unique scenery provided by over 2,000 limestone islets, breeze in hair, and cocktail in hand – except you won’t find a plastic straw in your drink.
— Channel New Asia

Singapore Startup Raises $618 Million to Expand Datacenters
Deutsche Bank AG underwrote a senior secured loan that will eventually be syndicated to a broader group of lenders, the Singapore-based startup said in a statement Monday.
— Bloomberg

Money already budgeted for handouts; Singapore’s land is a renewable fiscal resource
Bertha Henson, a former journalist from Straits Times and consulting editor of the defunct social-political site, Middle Ground wrote an opinion piece, following Prime Minister Lee Hsien Loong’s speech in the National Day Rally, asking whether the nation can afford to pay for the Merdeka package that was revealed by the PM.
— TOC

PM Lee gives good tips on how to cope with rising cost of living
At the National Day Rally yesterday night (19 Aug 2018), Prime Minister Lee Hsien Loong outlined several factors that have pushed up the cost of living in Singapore, as more Singaporeans have been complaining about it in recent times.
— TOC

550,000 flats to be spruced up under upgrading scheme
A total of 550,000 Housing Board flats will benefit under the Home Improvement Programme (HIP), the HDB said yesterday.
— The Straits Times

Romanian and Frenchman jailed for role in S$1.5 million cross-border scam
According to court documents, Iosif and Wiedmann worked for a man known as both “Boris” and “Eli”. They were each promised S$5,000 to fly to Singapore on Aug 27 last year to collect S$1.5 million in cash from Oceanic Group’s office at Fragrance Empire Building on Alexandra Road.
— TodayOnline

Singapore get first medal of 2018 Asiad
Singapore’s swimmers delivered the nation’s first medal at the 2018 Asian Games yesterday, a bronze in the men’s 4x200m freestyle.
— The New Paper

Fire traps family of seven on condo balcony
A family of seven was trapped in their Forestville executive condominium (EC) in Woodlands on Saturday evening after the digital lock to the main door failed to work during a fire.
— The New Paper

Devil’s in the details, but flat owners should not expect windfall from new HDB scheme: Analysts
The housing initiatives announced at the National Day Rally — particularly the new Voluntary Early Redevelopment Scheme (Vers) — will go some way to reassure homeowners whose leases are running down, said some analysts interviewed by TODAY.
— TodayOnline

Contractor under probe by HDB for stuffing papers into walls of flat
The Housing and Development Board (HDB) is investigating a renovation contractor who placed newspapers in the walls of a HDB flat.
— The New Paper

Singapore and Malaysia must follow terms of water and HSR agreements, says PM Lee
While Singapore appreciates the new Malaysia government’s reasons to review and change various policies of the previous administration, Prime Minister Lee Hsien Loong made it clear on Sunday (Aug 19) that both countries have to adhere to agreed terms relating to water prices and the Kuala Lumpur-Singapore High-Speed Rail (HSR) project.
— TodayOnline

New system to identify rail faults before they occur
A new system that identifies potential faults on the rail network before they occur will be introduced within the next two years, the Land Transport Authority (LTA) announced yesterday.
— the New Paper