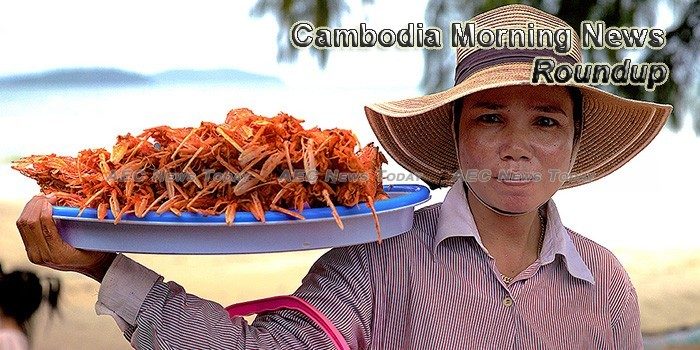 Japan, Cambodia sign $90m aid agreement
Japan signed a grant and loan agreement with Cambodia on Sunday totalling over $90 million, despite concerns from the international community over Prime Minister Hun Sen’s crackdown on government critics ahead of a July general election.
— Bangkok Post

NEC Announces Procedures on Press Cards Issue
The National Election Committee (NEC) called for national and international journalists to get press card issued in order to cover news in the upcoming electoral process, according to NEC’s media advisory released on Saturday.
— Fresh News

NEC Determines July 29 as the Election Date
The National Election Committee (NEC) officially determined July 29, 2018 as date for the Election of National Assembly Members of the 6th Legislature 2018, according to NEC’s press release on Sunday.
— Fresh News

Training program aims to strengthen aviation industry
The Civil Aviation Training Centre (CATC) has completed seven courses in the first three months of the year and says 26 courses will be offered in 2018.
— Khmer Times

Questions remain in City Hall plan for free buses to province
Phnom Penh City Hall has issued a schedule for the 60 buses that will drive people to several provinces for Khmer New Year, confirming the government has no plan to issue tickets but instead will rely on a first-come, first-serve system to allocate seats.
— The Phnom Penh Post

Flights from Phnom Penh to Indonesia on horizon
Direct flights between Indonesia and Cambodia are likely in the next three months because Indonesia is a major tourist market in Southeast Asia, according to a senior official on Saturday.
— Khmer Times

RFA reporters trading spy accusations
A former journalist who worked with Radio Free Asia has denied that he was a spy for the United States as accused by his former colleague.
— Khmer Times

Business Insider: Years of experience pay off for job site
The Cambodian economy continues to grow, and as it does, the number of available jobs is increasing. But it’s not always easy to match viable candidates with positions in their preferred industries.
— The Phnom Penh Post

Water taxis chart a new course
The first waterway taxi in Phnom Penh came into service on Friday, carrying people from the northern part of the city south to Takhmao city in Kandal province.
— Khmer Times