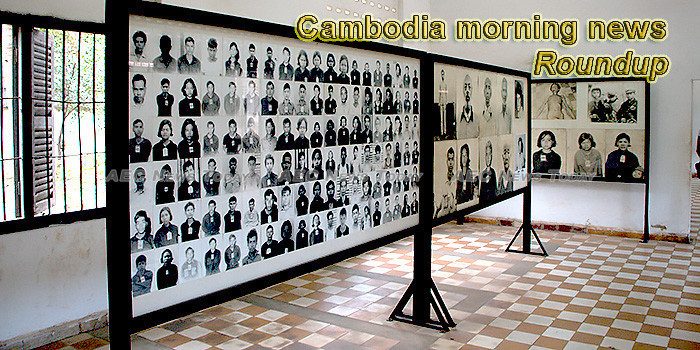 Cambodia reviews ban on opposition after EU sanctions threat
Cambodia’s parliament is reviewing a five-year ban on more than 100 members of the main opposition party, which could allow them to return to politics, following threats by the European Union to deny duty-free trading access to the Southeast Asian nation.
— Reuters

CRF joins chorus of criticism against potential EU tariffs
The Cambodia Rice Federation (CRF) last week met with trade representatives in Brussels to express its concern over the possibility that the European Union might impose tariffs on Cambodian rice exports.
— Khmer Times

Cambodia, ADB discuss $30m loan
The Ministry of Tourism has begun discussions with the Asian Development Bank (ADB) over a $30-million loan to fund infrastructure in coastal provinces that would support tourism development.
— Khmer Times

Lethal protest union leaders’ trial date set
Phnom Penh Municipal Court has set this Friday as the start of the trial of six union leaders who were charged following protests after the 2013 national elections where demands to raise the minimum wage for garment factory workers turned violent.
— The Phnom Penh Post

Government outlines efforts to strengthen democracy
The National Assembly is reviewing a five-year ban on more than 100 members of the former opposition party, which could allow them to return to politics, following threats by the European Union to revoke the Everything-but-arms treaty.
— The Khmer Times

GMAC says EBA removal worries are premature
In the wake of the European Union’s decision to put the Everything-but-arms (EBA) agreement with Cambodia under review, prior to its possible cancellation, the Garment Manufacturers Association in Cambodia (GMAC) said people should not be too worried.
— Khmer Times

In Cambodia, fintech development is slowly gathering pace
As Singapore strides ahead of other ASEAN nations in the arena of fintech development, Cambodia lags some way behind. Its fintech infrastructure is one of the least developed in Southeast Asia.
— Asean Today

CMAC outlines demining work during meeting in Switzerland
A Cambodian Mine Action and Victim Assistance Authority delegation last week briefed representatives from more than 100 countries on efforts to make Cambodia mine-free by 2025 at the Convention on the Prohibition of the Use, Stockpiling, Production and Transfer of Anti-Personnel Mines during its official visit to Switzerland.
— The Khmer Times

Forty-six US deportees set to arrive this month
Forty-six Cambodian deportees from the US are expected to arrive in the Kingdom later this month, according to a senior National Police official.
— The Phnom Penh Post

Cambodia’s migration boom leaves children home alone, and uniquely vulnerable
This demographic shift means that some villages are primarily populated by children, the elderly, and men who are unemployable because they use drugs or struggle with mental illness.
— Voice of America

Kem Sokha distances himself from ‘Rainsy’s’ US event
Former Cambodia National Rescue Party (CNRP) president Kem Sokha on Sunday further distanced himself from an international conference held in the US by members of the court-dissolved opposition.
— The Phnom Penh Post

United Front anniversary marked
National Assembly president Heng Samrin yesterday called on youth to maintain hard-earned peace in the Kingdom following decades of war as he commemorated the 40th anniversary of the Solidarity Front for the Development of the Cambodian Motherland.
— Khmer Times

Government extends disabled people’s strategy
The government will extend the National Strategy on Disability for another four years to eliminate all forms of exploitation and discrimination against persons with disabilities.
— The Khmer Times

Ministry urges greater youth participation in forest protection
The Environment Ministry is urging people, especially youth, to take part in the protection of forests and natural resources as the government is lacking manpower and equipment.
— Khmer Times

AIDS fight successes praised
The chairman of the National AIDS Authority (NAA) said on Saturday that Cambodia is successfully combating AIDS, having reached 90 per cent of its 2025 target. However, there are concerns about the number of AIDS patients who do not seek treatment.
— The Phnom Penh Post