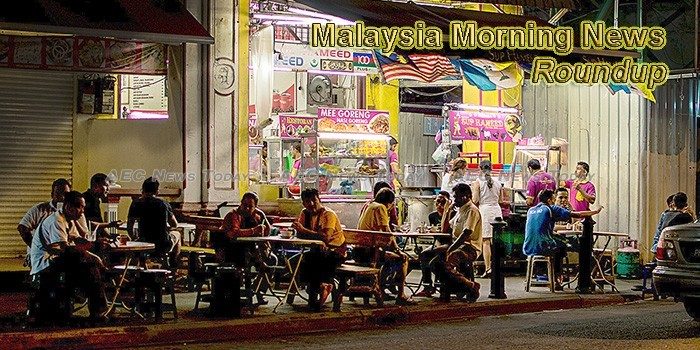 Jho Low And The China Issue
They seek him here and they seek him there, but best bets are back on China. Indeed, earlier today, a Hong Kong radio station reported that Jho Low had most recently fled back from Hong Kong into China, where it claimed he has now been detained pending Dr Mahathir’s visit next month.
— Sarawak Report

Greater retail fuel inflation to offset savings from zero-rated GST in June
RAM Ratings expects Malaysia’s headline inflation rate to inch up to 1.9 per cent in June, despite the zero-rating of GST the same month.
— The Borneo Post

Essential to resolve ongoing scuffle between Petronas and Sarawak – Analysts
It is crucial to resolve the ongoing issues between the Sarawak government and Petroliam Nasional Bhd (Petronas) as any prolonged contention would lead to delay in business operations including the award of production sharing contracts (PSCs) and approval of related contracts.
— The Borneo Post

Ikea Malaysia extends return policy to 365 days
IKEA Malaysia is extending its return policy from the current 100 days to 365 days to provide their customers more time to exchange or return their products after purchase.
— New Straits Times

Water war of words
Whenever Malaysia wishes to get under Singapore’s skin, it seems, all it has to do is talk about their bilateral water agreement.
— The Asean Post

MITI forms task force to monitor US-China trade war
The International Trade and Industry Ministry (MITI) has set up a task force in July to monitor and assess the developments of the United States-China trade conflict.
— New Straits Times

KLCI stretches gains to eight days, CIMB, Axiata advance
Blue chips extended their rally for the eighth day on Wednesday, powered by CIMB, Axiata and Telekom Malaysia, aided by net foreign buying – believed to be the first since June 29 during the window-dressing activities for the second quarter.
— The Star Online

Tax Holiday Helps Curb Malaysia Inflation
Thanks to a tax holiday, inflation in Malaysia slowed to the weakest pace since 2015 in June with consumer prices rising 0.8 percent from a year earlier.
— Bloomberg

Ringgit drops to new 2018 lows as Powell boosts US dollar
Ringgit falls to its lowest in almost seven months as the dollar strengthens after Federal Reserve Chairman Powell delivered an upbeat assessment of the U.S. economy. June inflation figures are due.
— The Star Online

MAA cuts 2018 car sales forecast on concerns over SST
The Malaysian Automotive Association (MAA), which opined that there is no need for a second national car, has revised downwards its total industry volume (TIV) forecast for 2018 by 0.8% to 585,000 units from 590,000 units projected earlier this year, mainly due to concerns on the reintroduction of the Sales and Services Tax (SST) on Sept 1.
— The Sun Daily

Sapura Energy shareholders vote for re-election of directors despite MSWG’s concerns
Majority shareholders of Sapura Energy Bhd pushed through resolutions to re-elect independent directors and payment of directors’ fees and benefits, despite the Employees Provident Fund (EPF) throwing its support behind the Minority Shareholder Watchdog Group’s (MSWG) call to reject the resolutions for failing to keep president and CEO Tan Sri Shahril Shamsuddin’s pay package in check.
— The Sun Daily

2018 headline inflation to moderate to 1.9pc: RHB Research
RHB Research Institute Sdn Bhd expects the country’s headline inflation to moderate to 1.9 per cent for 2018 compared with an increase of 3.7 per cent a year earlier on lower transport costs after the government fixed fuel prices at the current rates.
— New Straits Times