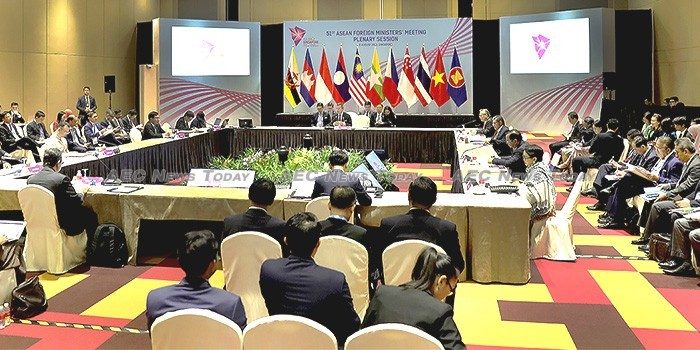 The 51st Asean Foreign Ministers’ Meeting (AMM) and related meetings held in Singapore from July 30 to August 4 were hailed as a success. Most notably, there were no delays in the issuance of a joint communique, which had previously been delayed because of seemingly intractable issues such as the South China Sea dispute.

In the midst of tumultuous geopolitical changes taking place around the world, Asean continues to be the bulwark that holds the Southeast Asian region together. Asean centrality and unity remain the keys to the grouping’s ongoing quest to build a resilient and innovative Southeast Asia and to improve its relations with external partners.

The South China Sea dispute remains the litmus test of Asean centrality and unity given its potential to divide the group.

At the start of the Asean-China Post Ministerial Conference (PMC) Singapore’s Minister of Foreign Affairs, Vivian Balakrishnan, announced that the foreign ministers from Asean member states and China had agreed on a draft document that will form the foundation of negotiations for a South China Sea code of conduct (COC). He described it as “yet another milestone in the COC process”.

Even so, Mr Balakrishnan sought to manage expectations and cautioned that the COC negotiations are far from over.

The competing territorial claims in the South China Sea have not been resolved, he said, as the COC “was never meant to resolve territorial disputes”.

Another major threat to Asean centrality is the rapidly shifting geopolitical landscape in the region with the intensification of major power politics. United States-China trade frictions continue to spiral, with no end in sight.

US Secretary of State Mike Pompeo sought to give assurances of sustained US interest in the region during his visit to Southeast Asia for the AMM and related meetings. This included announcing the $113 million that the US government has earmarked for new technology, energy, and infrastructure initiatives in Asia, as well as another $300 million “to reinforce security cooperation throughout the entire [Indo–Pacific] region”.

However, despite Mr Pompeo’s assurances, US commitment to upholding the current regional order remains in doubt, especially given US President Donald Trump’s protectionist streak and his tendency to question the utility of US alliances.

Internally, Asean also has its share of troubles. The South China Sea dispute and the Rohingya issue of Myanmar’s Rakhine state — with Asean’s apparent lack of unity in the former and reported inability to address the latter — are raising doubts about Asean’s ability to address tough issues.

But not all is lost. As the positive development on the South China Sea dispute at the AMM and related meetings in Singapore demonstrates, Asean is still well in the game — even if obstacles remain.

Asean’s role as the anchor of the region will become even more important in the future. With the possibility of US retrenchment from the region and China’s growing influence, Asean will need to ensure it is steadfast in ensuring its centrality in the region.

The South China Sea will continue to assume significance in Asean. In spite of claims that Asean has a limited role in the South China Sea dispute, given that only four of its members are claimants, Asean will need to step up to ensure its collective interests are respected and to ensure that these disputes do not escalate into full-blown conflict.

The AMM and related meetings have been and continue to be an important avenue to address this issue, although not without its hiccups — particularly in 2012 when no joint communique was issued because of disagreements over the South China Sea.

However, since then the dispute has once again featured in the joint communiques, with the latest highlighting the draft COC negotiating text.

Despite the issuance of the draft text, when the COC will materialize remains unknown, especially because the mutually agreed timeline on negotiations has not been made public.

Asean centrality a hedge against division

Land reclamations and the militarisation of disputed features in the South China Sea continue and Asean will need to address this issue sooner rather than later — possibly a tall order given the desire of most Asean claimant states to maintain good relations with China.

However, these remaining uncertainties are all the more reason why Asean needs to continue to work assiduously to manage the South China Sea dispute and contain any rising tensions.

Without Asean’s efforts major powers would likely have a much easier time dividing the region over matters such as the South China Sea.

The success of the 51st AMM and related meetings in Singapore reflects the crucial role that Asean plays in Southeast Asia and beyond. Moving forward, Asean must continue to be proactive about ensuring that it maintains its centrality and that external countries see value in Asean taking the driver’s seat.

This article was written by Henrick Z Tsjeng and Shawn Ho, associate research fellows with the Regional Security Architecture Programme at the Institute of Defence and Strategic Studies, S Rajaratnam School of International Studies (RSIS), Nanyang Technological University, Singapore. It first appeared on the East Asia Forum under a Creative Commons License and is reproduced here with its permission.