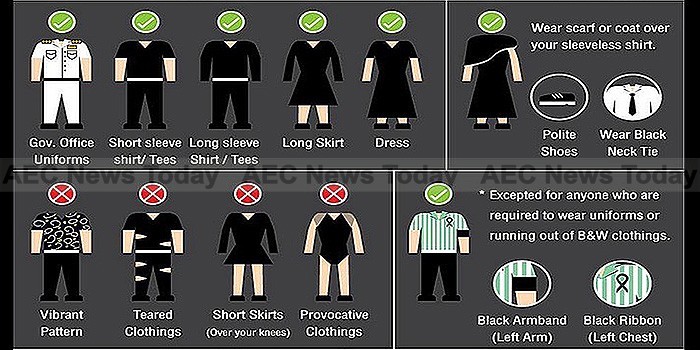 In the wake of the King’s death the Thai government announced a one year-long mourning period for officials and a 30-day mourning period for the public, during which all citizens have been encouraged to wear the traditional Thai mourning colours of either black or white.

Newspapers, websites, and television broadcast have all also removed colour from their productions, while any form of entertainment or festive behaviour has been strongly discouraged (See: Thailand Tourism Guide in The Wake of King Adulyadej’s Death).

The death of the long-reigning King caught the garment industry by surprise. Black is not a popular colour in Thailand except for semi- or formal events. Thais by tradition prefer more brightly coloured and stylish clothing.

With 66 million people suddenly looking for all manner of clothing in black, traditional supply chains have been stretched to the limits, while privateers in Thailand have been far from shy at jacking up prices in the face of overwhelming demand.

At the same time local Thailand media have reported numerous incidents of vigilantism, with ultra-royalists verbally assaulting and publicly humiliating people not dressed in black.

Many of those subjected to the rabid ultra-royalist assaults are reported to have said they simply could not afford to buy new clothing. To assist good Samaritans have set up locations across the country where people can take their existing clothes and have them dyed black for free.

For Cambodia’s garment sector it’s a boon. Factories with extra capacity have switched to making black clothing for export to Thailand as the country’s demand for black attire shows no sign of abating.

According to Vichara Kosal, owner of KB-Cambodia, a small Cambodia garment factory in Kandal Province, Thailand is taking as many black items as she can make.

In an interview with The Phnom Penh Post Vichara said: ‘Cotton is running out of stock in Thailand and there are many millions of Thais, so the demand is very high’, adding the surge had come on the heals of a tough five or six months for small Cambodia clothing manufacturers.

‘The buyers are in Poipet; they buy it and sell it in Thailand. After there were many orders, we distributed some to other places [for sewing]. Whatever I have, they will take it all’, she said.

However, despite the optimistic outlook expressed by some, Ken Loo, secretary-general of the Garment Manufacturers Association in Cambodia (GMAC) dismissed any suggestion Thailand’s rush for mourning wear would provide a boost for Cambodia’s garment sector. ‘Even if it is happening, it won’t be enough to affect the overall situation,’ Mr Loo said. ‘I don’t call it a trend.’

In the lead-up to the annual garment industry wage negotiations last month the GMAC claimed Cambodia’s garment sector was at risk of losing contracts to overseas destinations if the current minimum monthly wage of $140 was increased to the $171 Cambodia labour unions were requesting.

At the time the GMAC claimed 70 Cambodia garment factories had closed in the first nine months of the year, while only 20 new ones had opened.

Just one week earlier Cambodia Minister of Labour (MoL) Ith Samheng had declared on Facebook that only one had officially shut down in the first three quarters of 2016.

Representing about 7 per cent of the some 1,000 factories that make up Cambodia’s garment sector, the GMAC figure was initially disputed by Cambodia’s Ministry of Commerce (MoC), who one week later admitted that 122 Cambodia garment and footwear factories had in fact closed during the period, about 12.2 per cent, while 12 had opened. As at the end of March this year there was 589 registered exporting factories in Cambodia, it said.

Last month the Labour Advisory Council (LAC) increased next year’s minimum wage for Cambodia’s garment sector by 5 per cent to the $148 per month recommended by the Cambodia government. Cambodia Prime Minister Hun Sen then ordered another $5 a month added to the figure to bring Cambodia’s minimum wage for the garment sector to $153 per month, the third time he has over-ruled the LACs decision. Earlier this year the World Bank raised Cambodia’s status from a low-income economy to a lower-middle income country (See: Booming Growth Pushes Cambodia to Lower-Middle Income Status).