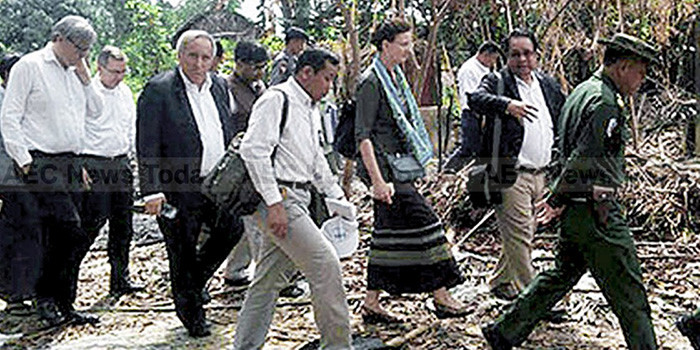 A high-level delegation of foreign diplomats and UN representatives have spent a second day in Rakhine State in Western Myanmar investigating the latest outbreak of ethnic violence.

The delegation, including the ambassadors of China, India, the United States and United Kingdom, European diplomats, and UN officials arrived in the strife-torn region yesterday morning along with senior Myanmar government officials.

More than 30 people have been killed, dozens arrested and some 15,000 people, both Muslim Rohingya and Buddhist Rakhinetha, have been forced to flee their homes in fear in the wake of brutal military crackdown after nine Myanmar police were killed at three border posts in Maungtaw district bordering Bangladesh on October 9.

The latest outbreak of violence in Rakhine State came just two day after US President Barack Obama ordered targeted sanctions on military-owned companies, officials, and associates of the former ruling junta, including former junta chief Than Shwe, founder of one of the Myanmar’s largest conglomerates, lifted. Mr Obama also lifted a ban on the importation of jadeite and rubies from Myanmar, in addition to lifting banking restrictions, despite human rights groups arguing that lifting the sanctions was premature.

Among the allegations being investigated by the high level delegation is that Myanmar security forces have raped villagers, looted towns, and torched homes belonging to the area’s Rohingya community.

The visit comes as security forces begin arming and training non-Muslim residents in the north of Rakhine State to protect themselves from Rohingya extremists, a move apparently endorsed by Nobel laureate and Myanmar State Counsellor Aung San Suu Kyi.

Turkish Radio and Television Corporation (TRT) reported that Rakhine parliament minister Min Aung, a member of Aung San Suu Kyi’s National League for Democracy (NLD) party, as saying “only citizens will be eligible to sign up for the police training”.

This will exclude most of the one-million Myanmar Rohingya who are denied citizenship, and live under severe restrictions that limit their freedom of movement, access to health care, education, marriage and have children by the Myanmar government. Tens of thousands have been detained in displacement camps since religious violence tore through Rakhine in 2012. According to Aljazeera police will also start recruiting civilians in Sittwe, Rakhine State’s capital, next week.

At the same time as the high level delegation was leaving Yangon, the State-owned Global New Light of Myanmar reported that teams from State-run news agencies were also travelling to the region to, according to the government publication, ‘clarify’ the situation and ‘refute accusations on the alleged racial and religious persecution’ by the Myanmar army.

Coinciding with the international inspection has been an announcement that relief convoys will again be allowed to Maungdaw township, site of the latest violence, after having been suspended by the Myanmar army on October 9.

Speaking with Reuters, UN resident and humanitarian coordinator in Myanmar, Renata Lok-Dessallien, said international observers would also be permitted to monitor the distribution of aid to people in northern Rakhine displaced by the violence. She said that the Myanmar government had also assured diplomats that humanitarian support would be provided to up to 15,000 people believed to have been displaced since Oct. 9.

Independent reports from the region are severely hampered due to security personal banning independent media organisations from parts of the state, particularly where there are ongoing military operations.

Rakhine State has seen repeated outbreaks of ethnic unrest and violence between Buddhists and Muslims since 2012, despite having previously coexisted in harmony for generations. In 2012 violence killed hundreds of people, with the United Nations Human Rights Council (UNHCR) recording more than 145,000 internally displaced people (IDPs) as a result.