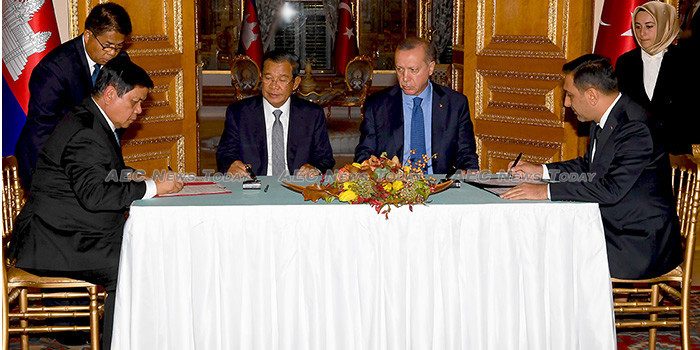 Cambodia will greatly expand its two-way trade with Turkey, Prime Minister Hun Sen said, perhaps seeking out new economic partners days after his talks with European Union (EU) officials failed to break an impasse over the crucial Everything But Arms (EBA) trade agreement.

During a three-day visit to Istanbul, Hun Sen presided over the Cambodia-Turkey Business Forum (CTBF) and met with top Turkish leaders, including President Recep Tayyip Erdogan. He said in a post to his Facebook page on Monday that the two leaders “agreed to increase bilateral trade between Turkey and Cambodia to $1 billion in the short future“.

The announcement comes after the EU this month threatened to start a formal procedure to strip Cambodia of its special EBA trade status, which could reimpose tariffs on roughly 40 per cent of Cambodia’s exports and cost the country more than $676 million each year, according to government figures.

The dispute with the EU followed a July general election that returned Hun Sen to power for another five year term after 33 years in office, but which was widely denounced in the West as a sham. The EU has long raised alarm about what it sees as a deterioration of human rights, the dismantling of the opposition, and a muzzling of the media.

Turkey: A welcoming friend for Cambodia

Talks between Hun Sen and the EU’s top diplomat at the weekend failed to avert the threat of a suspension from the EBA.

Negotiations were more welcoming in Turkey, where the two leaders signed eight memorandums of understanding, including in the areas of education, tourism, investment, and agriculture. Prime Minister Hun added that Cambodia would open an embassy in Ankara, the Turkish capital, in 2019.

“Cambodia and Turkey have a strong and cooperative relationship”, Mr Hun added.

Even so, the Prime Minister noted that the trade volume between the countries was small. The Turkish foreign ministry said on its web site that bilateral trade was worth $108 million in 2015.

Turkey currently has just three current investment projects in Cambodia worth around $11 million, and of the four million tourists who have visited Cambodia so far this year, only 5,000 Turkish nationals have arrived. Hun Sen suggested that direct flight between the countries would improve the tourism numbers and investment opportunities.

Hun Sen also urged Mr Erdogan to expand the number of scholarships for Cambodian students, and urged Turkey to purchase more agricultural products from Cambodian farmers including rice and mangoes.

President Erdogan, in turn, promised to help with landmine clearance issues by providing assistance to the Asean Regional Mine Action Center, which is headquartered in Cambodia.

Additionally, both counties agreed to commemorate the 50th anniversary of official Cambodia-Turkey relations in 2020 with a range of activities.