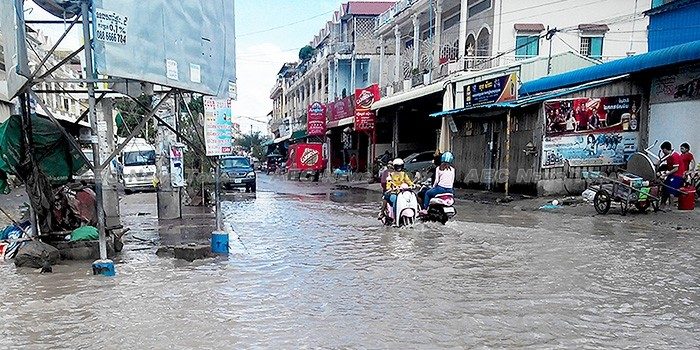 Despite its limited financial capabilities Cambodia could soon have sustainable infrastructure development as a result of it signing up to the Sustainable Development Investment Partnership (SDIP). A membership that not only puts it on the front line for receiving much needed infrastructure funding, but which will also allow it to slowly wean itself from its dependence on Chinese ‘generosity’ for much of its infrastructure needs.

Launched more than a year ago during the United Nations Conference on Financing for Development in Addis Ababa, Ethiopia and backed by the Organization for Economic Cooperation and Development (OECD) and the World Economic Forum (WEF), the SDIP currently has more than 30 members comprising foundations, governments, and leading global financial and funding institutions from the public and private sectors. Over the next five years it aims to mobilise US$100 billion for infrastructure projects in developing countries through public-private sector partnerships

To date the SDIP has been particularly active in Sub-Saharan Africa where it has facilitated funding for major transportation and energy projects including the $22-23 billion Lamu Port South Sudan Ethiopia Transport (LAPSSET) Corridor, which will link Kenya with Ethiopia, Uganda and South Sudan.

In addition to being the first Asean member country to participate in the SDIP when Prime Minister Hun Sen attended the World Economic Forum in Davos, Switzerland last month, Cambodia became one of only two developing countries that is a member… Côte d’Ivoire being the other.

Cambodia’s decision to join comes at a time when the Kingdom is pushing public-private partnerships (PPPs) in an attempt to fill the gab between much needed infrastructure development and a shortage of funds to cover the costs.

Admitting that it lacks the capacity and capability to build all of the infrastructure needed to meet its rapid growth, the Cambodian government has for years been calling on the private sector to partner with it and bring in more funding for infrastructure development. According to an article in the Phnom Penh Post last year, Prime Minister Hun Sen instructed the Ministry of Economy and Finance to open the way for increased public-private partnerships in infrastructure development by preparing the appropriate policies to encourage easy implementation.

Mr Hun was quoted as saying that quality public and private investments were needed to fill gaps in cross-border transport, as well as maintaining national highways and key routes for trade and industrial transportation.

Major projects undertaken in Cambodia through public-private partnerships to date include its three international airports – Phnom Penh, Siem Reap, and Sihanoukville – which were built, developed and have been managed under a 25 year concession from the Cambodia government since 1995 by Cambodia Airports. a joint venture between French-owned Vinci Airports and Cambodia’s Muhibbah Masteron, which is 70 per cent owned by Malaysia conglomerate Muhibbah Engineering Berhad and 30 per cent owned by Cambodian businessmen Kong Triv and Hann Khieng.

In addition six operating and one under-construction hydro-power dams have been been built using the build-operate-transfer (BOT) model, with Cambodia Minister of Mines and Energy, Suy Sem, recently calling for more of the same (See: Government Happy For Chinese Dominance of Cambodia Energy Sector to Continue).

As one of the least developed countries in Southeast Asia, despite its robust economic growth and attractiveness to foreign investors, Cambodia lacks the funds necessary to build and develop the infrastructure it needs. It was estimated that Cambodia needs between $12 and $16 billion to fund necessary infrastructure requirements between 2013 to 2020. While some of this has been met by Chinese aid and loans, even Chinese largesse has been insufficient to meet the infrastructure Cambodia needs.Just how deeply China has its hooks buried into Cambodia is reflected in 45 per cent of Cambodia’s $10 billion in external debt at the end of 2015 being owed to China.

Similarly China is also Cambodia’s biggest source of investments and development aid. Since 1992 Cambodia has received some $200 million annually in aid from its northern benefactor, in addition to some $3 billion in soft loans and grants. Its not surprising that Chinese companies are Cambodia’s largest source of foreign direct investment, pouring more than $10 billion into the Khmer economy from 1994 to 2016. Cambodia has also been included in Beijing’s more recent undertakings such as the Asian Infrastructure Investment Bank (AIIB), the $40 billion Silk Road infrastructure fund, and the One Belt, One Road Initiative.

With such heavy reliance on Chinese aid and investments, it is not surprising that Cambodia’s foreign policy often tilts towards China at times, particularly on issues relating to the South China Sea.

Cambodian officials have expressed optimism for the future with their country’s inclusion in the SDIP.

Speaking at the World Economic Forum meeting in Davos, Switzerland last month where Cambodia’s membership of the SDIP was formalised, Prime Minister Hun said that he expects the initiative to “push infrastructure projects beyond the planning stage”.

Claiming that the majority of infrastructure projects planned for the country have not advanced past their planning stage due to a lack of funding, Mr Hun said, “if we review project development in our country, you could fill several warehouses with all the plans that have been shelved because they lacked financing.”

With the SDIP providing an alternate source of funding it remains to be seen whether Cambodia can wean itself from its reliance for infrastructure funding from China, or not.