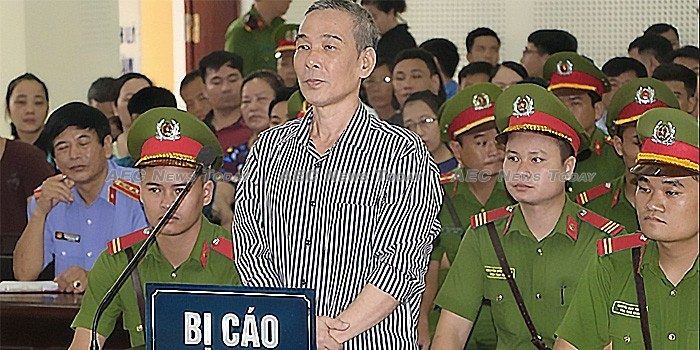 The relatively muted response of the European Union (EU) and the American government to the 20-year prison sentence given last month to Vietnamese activist Le Dinh Luong stands in stark contrast to the loud intimidation the United States and the EU have been directing towards Cambodia since its general election last month.

In the Vietnamese court, according to a copy of the indictment obtained by Reporters Without Borders (RSF), Le Dinh Luong, 53, was sentenced to two decades in prison for being guilty of committing activities “aimed at overthrowing the people’s administration”.

The prosecutor argued in court during Luong’s five-hour trial on August 17 that he had encouraged people to boycott the 2016 Vietnamese general election; had incited protests against Taiwanese-owned Formosa Ha Tinh Steel company over a “marine environmental disaster” (See: Dead fish present challenges for new Vietnam leadership); and had written posts for his Facebook account that expressed views against the Communist Party of Vietnam (CPV) and the Vietnamese state.

Most of the evidence used to convict Luong, who has been in detention since his arrest in July 2017, came from investigations into his Facebook posts and other activities.

The jailing of Luong is only the latest in a string of harsh penalties that have been imposed on Vietnamese bloggers over the past year. Among the most notable was that of environmental blogger Mother Mushroom, aka Nguyen Ngoc Nhu Quynh.

Ms Nguyen was jailed for 10 years in June 2017 for being involving in the protests against the Formosa plant in north-central Vietnam, which was linked to a catastrophic fish die-off in 2016. (See: Money For Mass Fish Die-Off Puts Pressure on Formosa And Government)

At the beginning of last year one blogger and two citizen journalists, Tran Thi Nga, Nguyen Van Oai, and Nguyen Van Hoa, were separately arrested, charged, convicted, and sentenced to prison terms ranging from six to eight years on charges relating to propaganda, overthrowing the governing administration, and infringing upon the interests of the state.

The six were accused of having officiations with the Brotherhood for Democracy (BfD), a campaign founded in 2013 to defend human rights and promote democratic ideals in Vietnam. Their sentences ranged from seven to 15 years in prison, with two more of their colleagues meeting the same fate for the same reason within a week.

Another BOD activist, Nguyen Trung Truc, was taken from his Quang Binh home in handcuffs and charged under Article 79 with working to overthrow the government, which could result in a death sentence upon conviction.

Earlier in August, Mr Nguyen was reported to be suffering health problems because of the conditions of his incarceration. According to Radio Free Asia, his eyesight was failing because he was being kept for long periods of time in total darkness.

Nguyen Trung Truc was initially expected to stand trial on August 17, but according to his lawyer Nguyen Van Mieng trial Judge Tran Huu Sy postponed the hearing indefinitely on August 12 without giving a reason.

The international reaction against the persecution of Vietnam bloggers, journalists, and citizen journalists has largely been led by RSF.

At the time RSF urged Vietnam’s commercial partners to ‘draw the appropriate conclusions’. In early February of this year RSF similarly criticised the four-year prison sentence handed to blogger Ho Van Hai for spreading ‘anti-state propaganda’, urging other countries to remind Vietnam that it had obligations as a member of the United Nations Human Rights Council (UNHRC).

Later that month when journalist Pham Doan Trang was taken into police custody and then held under de facto house arrest without internet access or electricity, but with armed guards posted outside, RSF called on the European Parliament to refrain from ratifying a free trade deal struck between the EU and Vietnam.

When the six citizen journalists were given lengthy prison terms in June, Daniel Bastard, the head of RSF’s Asia-Pacific desk, declared that Vietnam had “lost all credibility” on the global stage.

“These sentences are utterly grotesque”, he said, adding “the only crime committed by these Brotherhood for Democracy members was posting articles calling for respect for human rights in Vietnam”.

Finally, when Le Dinh Luong received a 20 year sentence on August 17, RSF reiterated its call for Europe to avoid ratifying any trade deals with Vietnam.

The European Parliament has not been silent. On December 14 it passed a resolution condemning Vietnam’s treatment of bloggers and citizen journalists, and of ‘Mother Mushroom’ and Nguyen Van Hoa in particular, urging authorities to release them and all others imprisoned for similar reasons “immediately and unconditionally”.

EU-Vietnam FTA ‘not a done deal’

According to RFA, Scottish MEP David Martin warned that the EU-Vietnam Free trade agreement (EU-Vietnam FTA), expected to be signed next summer, was not a done deal.

“We will take into account the human rights situation, as well as the worker and environmental standards in Vietnam when we vote on the FTA in this Parliament,” he said.

The American reaction to Le Dinh Luong’s sentencing has been similar, though has similarly not moved beyond some sternly worded statements.

“The trend of increased arrests and harsh sentences for peaceful activists in Vietnam is troubling,” the US State Department said, adding that “the United States calls on Vietnam to release all prisoners of conscience immediately and to allow all individuals in Vietnam to express their views freely and assemble peacefully without fear of retribution”. That’s it.

Both however have been quick to threaten and implement punitive action against neighbouring Cambodia, where a recent general election resulted in the ruling Cambodian People’s Party (CPP) winning all 125 seats in the country’s parliament.

As a result a handful of political activists were fined for repeating the call within Cambodia; none were jailed.

Cambodia’s National Election Committee (NEC) had warned it would fine anyone KHR5- to 20-million (about US$1,240 to $4,950) if they were caught urging citizens to boycott the Cambodia general election.

Members of a team of international and local observers all denied having seen anything untoward in the casting of ballots and signed off on the election process having been fair and unhindered. (See: The 2018 Cambodia general election: By the numbers *updated)

However, despite this, almost immediately after the election both the EU and the US threatened Cambodia with economic sanctions.

Washington made the first significant move on June 12, blacklisting the commander of Hun Sen’s bodyguard unit, General Hing Bun Heang for human rights abuses against the Cambodian people, freezing his assets and freezing all business dealings with him in the US.

Likewise, on May 2018, the EU, which had suspended funding for the election, sent a fact-finding mission to Cambodia in June to determine whether the country should be expelled from the EU’s Everything But Arms scheme, which grants Cambodian exports tax-free entry into the European market.

The following month the Cambodian government sent envoys to Europe to try to convince the EU not to kick it out of the preferential trade deal, the loss of tariff-free access to the European market expected to significantly damage Cambodia’s massive garment industry.

Pouring salt on open wounds both the US and EU ambassadors to Cambodia declined to attend today’s (Sept 5) opening of the new National Assembly.

Quickly following America’s lead the Australian embassy in Phnom Penh also did not attend, coming at a time when it should be cosying up to Phnom Penh following the evidence-deficient conviction last week of Australian film-maker James Ricketson on espionage charges.

Meanwhile, Australia, the EU, and US appear content to continue turning a blind eye to the oppression of Vietnam citizen journalists, journalists, and bloggers, as long as the country keeps buying high-ticket items such as jet aircraft (See: VietJet doubles down on mega Boeing order with jet buying spree (HD video))