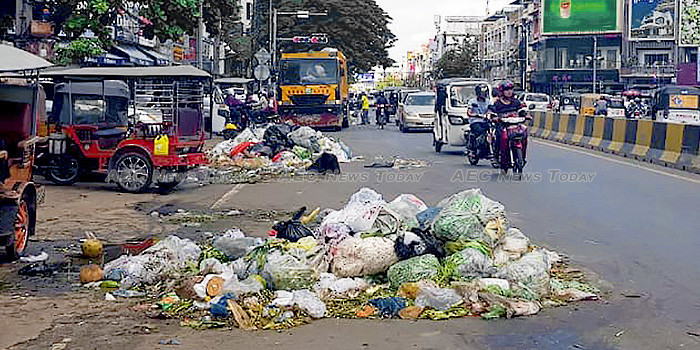 One of the lasting impressions many visitors to the Cambodian capital, Phnom Penh, are left with is mounds of stinking, decaying, garbage piled on the sides of streets, free range rats chirping and scurrying backwards and forwards across the mounds in search of nourishing morsels. That might all be set to end.

In a surprise announcement earlier today (Oct 22), Cambodia Prime Minister Hun Sen announced that the government was taking temporary control of waste management company Cintri and ending its monopoly on garbage collection services in the capital.

Speaking to students at the inauguration ceremony of Build Bright University, Prime Minister Hun said since the government had awarded the contract to Cintri the daily amount of rubbish collected in Phnom Penh had risen from 500 tonnes a day to up to 3,000 tonnes daily

Claiming it was too much for one company to handle alone, Mr Hun said up to four contractors are necessary to adequately perform the task.

Cintri can bid for the next contracts, the PM said, but “not for all of Phnom Penh”, which will be divided up into four zones.

Cintri was awarded an exclusive 47-year contract in September 2002, but has battled to keep up with the ever increasing amounts of garbage generated daily as Phnom Penh continues to experience rapid growth.

A network of narrow, difficult to navigate streets, an inefficient payment collection system, combined with the almost total absence of garbage bin use, along with worsening traffic congestion have all combined to see the company falling increasingly behind in its collection duties. The Cambodian habit of creating impromptu dumping sites on any piece of vacant land also sees Cintri staff frequently diverted from normal collection duties.

Taking aim at the increasing amounts of litter on Phnom Penh street, Mr Hun said he was aiming to follow the Singapore example. Hinting at possible harsher penalties in the works, Mr Hun urged Cambodian’s to stop dumping their trash in public places.

“If everyone knew how to dispose of rubbish correctly, maybe there will be no trash, no plastic bags blowing in the wind. If not 100 Cintri’s will not be enough”, he said.

Calls to break up the Cintri monopoly have been ongoing for several years. In 2017 Bunrith Seng, then a senior consultant at the United Nations Development Programme (UNDP) in Cambodia and a former operations specialist for Cintri, told a meeting “it would help improve things”.

While no timeframe for the opening up of new garbage service tenders was announced today, it is expected to attract interest from more than a handful of companies.

Currently fees for household garbage collection are added to household electricity bills by Electricite du Cambodge (EdC) at KHR4,000 (nominally US$1) per month. However, there is no compulsion for people to pay.

In 2017 Phnom Penh City Hall spokesperson, Met Meas pheakdey, said “it is within the rights of citizens not to pay for services they do not deem acceptable, and it is not the government’s concern if the company is not paid.

Fee collection for Cintri in Phnom Penh has been reported to be as low as 60 per cent for households and 15 per cent for businesses.

Cintri trash collectors receive negligible occupational health and safety equipment or occupation specific tools and are paid $159 per month. Earlier this year Sahmakum Teang Tnaut, a Cambodian Urban NGO, reported that at least 14 Cintri employees had been killed while at work in the last four years.

Multiple attempts to gain comment from Cintri were not responded to.