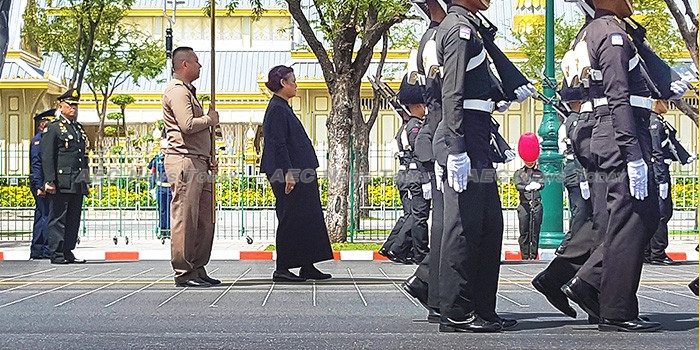 The second dress rehearsal for the royal funeral of Thailand’s late King Bhumibol Adulyadej was held today, October 15, in near perfect weather conditions and amidst some of the tightest security Bangkok has seen.

From well before security checkpoints opened at 5am Thais began queuing for the second of three dress rehearsals in the lead-up to the five day-long royal funeral ceremony of the late monarch; And the first funeral for a monarch that Thailand has seen for 67 years. A ceremony steeped in tradition, and incorporating elements of Buddhism and Hinduism, much of which will be conducted in the Pali-Sanskrit royal tongue.

From very young to very old; spanning across all social classes and political affiliations they queued patiently and solemnly, the lines stretching hundreds of meters long. The wait, many said, was inconsequential. For many, the dress rehearsal was only marginally below attending the October 25-29 royal funeral.

Those wishing to enter the area around the royal cremation grounds — Sanam Luang — were required to pass through airport-style metal detectors, showing their Thai ID cards to cameras as they did so. Bags were thoroughly checked, and finally each person was given a wipe over with a hand-held metal detector.

Inside the quarantined area teams of uniformed and plain-clothed security personal mingled with mourners; unattended bags were quickly pounced on, quarantined and checked.

Hundreds of volunteers who responded to the ‘We do good deeds with our hearts” merit making suggestion of King Maha Vajiralongkorn Bodindradebayavarangkun were on hand to reinforce security measures — and assist the public — as were hundreds or more teams of medics, nurses, and volunteer rescue personal.

Thailand Prime Minister Prayut Chan-o-cha and Princess Maha Chakri Sirindhorn, younger sister of the current King of Thailand, joined the dress rehearsal, much to the delight of those attending.

As the royal funeral procession slowly made its way towards the royal crematorium multiple teams of high ranking police and military from all of Thailand’s armed forces shadowed its progress. Notes were dictated, photos taken, and details needing addressing to reach perfection recorded.

The photos below capture today dress rehearsal for the royal funeral of King Bhumibol Adulyadej and are in order of appearance.