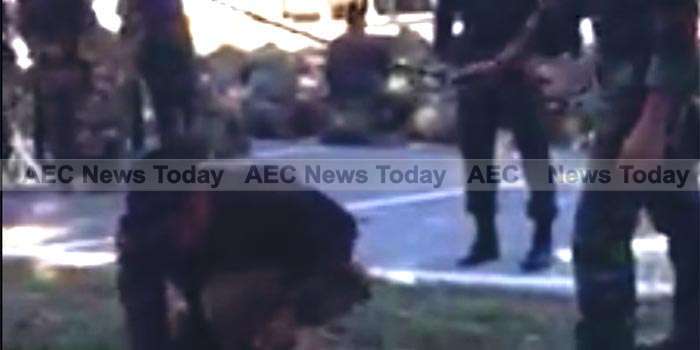 The reign of bastardisation in the Royal Thai Army (RTA) continues to claim victims. This time a brutal ‘disciplinary action’ by Thai army instructors using what appears to be a wooden stick, booted feet, and fists has inflamed Thai netizens. (Click here to view the video)

In the latest video shared on Facebook, Thai army Ranger Lance Corporal Pratchya Wattanasundhi is beaten with what appears to be a wooden stick, kicked, and hit… all for breaching discipline on a special forces training course.

In the video a bare-footed Lance Corporal Wattanasundhi receives several whacks from what appears to be a wooden stick to the upper back causing him to drop to a squat. Forced to stand and bend over, the Thai army instructor then delivers another stinging blow across the top of Lance Corporal Wattanasundhi’s hips . He is then struck several more times, before another Thai army instructor comes into the frame to whip him with what looks like a riding crop, causing him to again fall to the ground where he is kicked and hit. All along what appears to be a senior Thai army instructor looks on.

According to Thai army spokesman Colonel Winthai Suvaree the training course is widely known for its intensity and brutality in order to intensively prepare trainees for special military missions. However, Colonel Suvaree said “a harsh, physical penalty against the trainee is not in line with the Army’s guidelines. An investigating committee of the Thai Army’s Calvary Centre is looking into this case”, he added.

In a local news report Major Veeratyut Vurtsiip, commander of the Cavalry Centre, said Lance Corporal Wattanasundhi had ‘sneaked out during a training on long-distance talk to buy cigarettes and then smoked in the presence of trainers.

He said this was not the first instance of Lance Corporal Wattanasundhi had breached discipline, and while there was an investigation underway, the trainee was not angry with his Thai army instructors because he accepted his offence.

Following the death of 26-year-old conscript Private Wichian Phuaksom, in 2011, an investigation found RTA Sub-Lieutenant Om Malaihom guilty of ordering him beaten. In April AEC News Today reported “the family of Private Phuaksom had to sue Thailand’s Ministry of Defence (MoD), the RTA and the Prime Minister’s Office before receiving [promised] compensation: Bt7 million (about US$198,694).”

Thailand’s National Human Rights Commissioner, Angkara Neelpaijit, says the junta, led by General Prayut Chan-o-cha, is still promising to make torture a criminal offense, but we have yet to see any action taken to thwart this kind of abuse. Since being uploaded to Facebook on November 18 the video clip above has been viewed more than 13 million times.