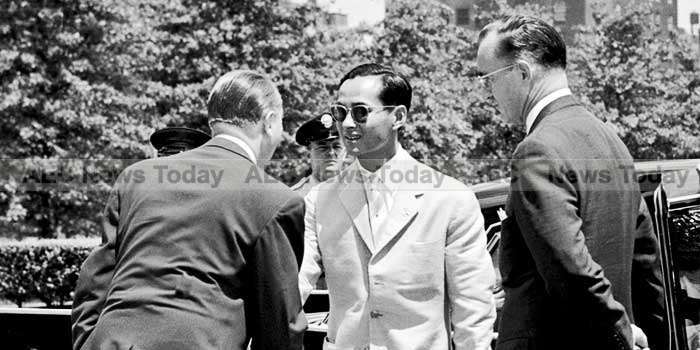 Established almost 18 years after his birth and just seven months prior to his coronation on June 9, 1946, it wasn’t until July 6, 1960 that Thailand’s King made his first visit to the esteemed body.

At the time he and the queen dowager, Queen Sirikit, were met by the UNs second secretary-general, Swedish diplomat, economist, and author, Dag Hammarskjöld. At the invitation of then US president, Dwight Eisenhower, King Adulyadej also addressed a joint session of the US Congress.

In 1967 King Adulyadej returned to the United Nations where he and Queen Sirikit met with its third secretary-general, Burmese diplomat U Thant, in addition to being guests at the White House of Lyndon B. Johnson and the first lady. In 1973 he was hosted by its fourth secretary-general, Austrian diplomat and politician, Kurt Waldheim.

Although this was to be his last visit to the United States it was not the last contact between Thailand’s King Adulyadej and UN secretaries-general. In February 2000 and May 2006 the then UN secretary-general Kofi Annan met with King Adulyadej at Klai Kangwol Palace, in Hua Hin, Thailand.

While the King’s attention to domestic affairs prevented him from attending the UN after 1973, his work and commitment to the people of Thailand did not go unnoticed. In 2006 then secretary-general Kofi Annan used the audience he was granted to present Thailand’s King Adulyadej with the UN Development Program’s (UNDP) first Human Development Lifetime Achievement Award.

A King for environmental awareness

Addressing the UNGA ahead of observing a one minute silence, Peter Thomson, president of the 71st session said that at “his Coronation, he (King Adulyadej) declared ‘“We shall reign with righteousness for the benefits and happiness of the Siamese people”’ – it was a commitment he worked tirelessly to fulfil throughout his life”.

Noting King Adulyadej’s commitment to the environment, Mr Thomson said: “He played a leading role in the promotion of soil science and conservation, and was a leader in sustainable land resource management.

“Under King Bhumibol’s leadership, Thailand raised global awareness of the importance of soil as a resource for poverty reduction, climate change adaptation, sustainable development, and security.

“In 2013, the General Assembly recognised these efforts by designating 5 December – the same date as the King’s birthday – as World Soil Day, as well as 2015 on the International Year of Soils.

A troll through the photographic library of the United Nations reveals a treasure-trove of rarely seen photographs documenting Thailand’s King Adulyadej’s contact with the UN dating back to July 6, 1960. We present them here to recognise the lengthy relationship between King Adulyadej’s and the UN.