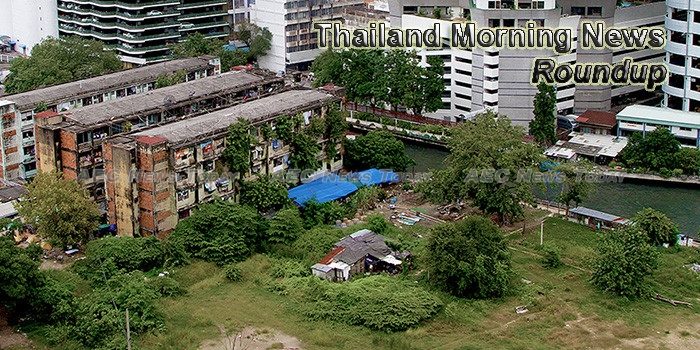 Finance Ministry keeps GDP growth outlook at 3.6%
The Thai economy is expected to grow 3.6% this year, as earlier forecast, with exports likely to increase more than expected, the Finance Ministry said on Thursday.
— Bangkok Post

Prayut says gov’t right to take Yingluck assets before verdict
Prime Minister Prayuth Chan-ocha said Thursday his government was right to confiscate the bank accounts of former Prime Minister Yingluck Shinawatra as it was a separate matter than her malfeasance trial, which has yet to render a verdict.
— Prachatai English

BoI: Investment applications to reach B600bn target
The Board of Investment is confident overall applications for investment privileges will reach the target of 600 billion baht in 2017, according to BoI secretary-general Hiranya Suchinai.
— Bangkok Post

PM orders preparations on concerns over flooding
The Prime Minister has expressed concern over widespread rains in the north and northeast and ordered integration of all relevant agencies in providing relief.
— NNT

Lenders fear new credit card rules
The Bank of Thailand’s imminent measure to put a three-lender restriction on personal loans to new applicants earnings less than 30,000 baht a month will take a heavy toll on lenders, says the head of…
— Bangkok Post

Yingluck faces 11 power-abuse cases
As ex-prime minister Yingluck Shinawatra awaits the Supreme Court’s verdict on the rice-pledging scheme, 11 other cases linked to her that may involve abuses of power are being probed by the National Anti-Corruption Commission (NACC).
— Bangkok Post

Sonca leaves ruinous signature
From a rail track buried under mudflow to several thousand rai of farmland swallowed by floods, tropical depression Sonca left its mark on the Northeast and Central Plains as it whipped through the regions…
— Bangkok Post

iLaw criticises NRSA ‘failure’
HUMAN RIGHTS group iLaw yesterday slammed the junta-appointed National Reform Steering Assembly (NRSA) for not bringing about meaningful reform despite spending more than Bt1 billion of the state budget in the past 22 months.
— The Nation

Prayut-Yingluck in war of words over assets seizure
The freezing of assets of former prime minister Yingluck Shinawatra had nothing to do with the rice-pledging scheme case in which the Supreme Court’s criminal division for holder of political positions set to hand down the verdict on August 25, Prime Minister Prayut Chan-o-cha said today (July 27).
— Thai PBS

Govt offers prizes to debit card users
The Ministry of Finance has given prizes totaling more than six million baht to lucky debit card users and shops with Electronic Data Capture (EDC) facilities. Debit card payments in the second quarter increased by more than 30% compared with the same quarter in 2016.
— NBT World (video)

Pheu Thai’s Kasem faces yet another graft charge
The National Anti-Corruption Commission has sought the indictment of Kasem Nimmonrat, the former Pheu Thai Party MP and former vice-president of the Chiang Mai Provincial Administration Organisation (PAO), on a charge of having amassed unusual wealth.
— Bangkok Post

Ombudsman clears junta’s submarine deal
The Office of the Ombudsman of Thailand (OOT) has dismissed allegations of irregularities in the junta’s multi-billion baht submarine deal with China.
— Prachatai English

3 years under the junta: rural perspectives
Three years after its coup, Thailand’s junta is subjecting rural people to harassment and prosecution, but pleasing investors, according to local NGOs.
— Prachatai English