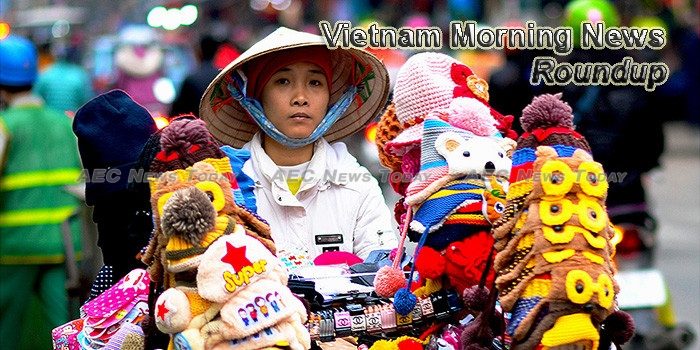 Vietcombank to fully cut its cross ownership
The fourth-largest bank in Vietnam by assets expects to reap VND1 trillion ($44 million) from selling all of its 6.97 per cent in Military Bank and 8.2 per cent in Eximbank in early 2018, according the Mr. Thanh.
— VietnamNet Bridge

First export processing zone spotlight in HCM City
In 1991, the 7th National Congress of the Communist Party of Vietnam passed the strategy on socioeconomic stabilization and development by 2000 with the policy of developing all economic sectors and broadening forms of joint venture and cooperation with foreign partners to boost export. industries.
— VietnamNet Bridge

MoIT investigates imported fertiliser
The Ministry of Industry and Trade (MoIT) has issued Decision No 4236 / QD-BCT to extend the deadline for investigating cases of applying safeguard measures for DAP and MAP fertilisers imported into Viet Nam before issuing the final report.
— Bizhub

Vietnam sees opportunity in fruit, vegetable, flower exports
In the first nine months of 2017, Vietnam earnt US$2.62 billion through the export of fruits, vegetables and flowers, higher than the respective export turnover on crude oil ($2.2 billion) and rice ($2.04 billion) over the same period.
— Tuoi Tre

Domestic supermarkets gradually losing competitive ability
The country’s retail commerce growth is expected to reach 11.9 percent a year in the phase of 2016-2020 with the market size approximating US$179 billion by 2020, according to Commerce Research Institute.
— VietnamNet Bridge

Mekong Delta needs US$5.3b in public investment
The Mekong Delta region needs an investment of VND120 trillion (US$5.3 billion) for the green growth from 2016 to 2025, the Ministry of Planning and Investment (MPI) said.
— Bizhub

Reference exchange rate goes up by 4 VND
The State Bank of Vietnam set its reference VND/USD exchange rate at 22,466 VND/USD on the morning of November 14, up by 4 VND from the day ago.
— VietnamPlus

​Vietnam has less to gain from CPTPP: expert
Vietnam will not benefit as much from the newly created Comprehensive and Progressive Agreement for Trans-Pacific Partnership (CPTPP) in comparison to the original TPP.
— Tuoi Tre

On the verge of another Chinese investing wave
Vietnam is currently on the receiving end of a new wave of mainland Chinese investment this year, with about US$1.8 billion of capital registered so far.
— VietnamNet Bridge

Vietnam holds big potentials for software industry: Siemens manager
Vietnam holds potential to develop its software industry thanks to having many young IT-savvy workers, according to Cedrik Neike, Member of the Managing Board of Siemens AG, Europe’s leading industrial manufacturer based in Germany.
— VietnamPlus

Vietnam manages delicate balance between US and China
Donald Trump last week became the first U.S. president since the Vietnam War to have visited Vietnam during his first year of office, spending three days in the country during his inaugural Asian tour.
— Nikkei Asian Review

Ho Chi Minh City, RoK’s Daegu forge stronger business collaboration
Ho Chi Minh City and Daegu city of the Republic of Korea (RoK) should work together to optimise their cooperation potential in trade and investment in the future, said Le Thanh Liem, Vice Chairman of the municipal People’s Committee, at a business forum between the two cities on November 13.
— Nhan Dan Online