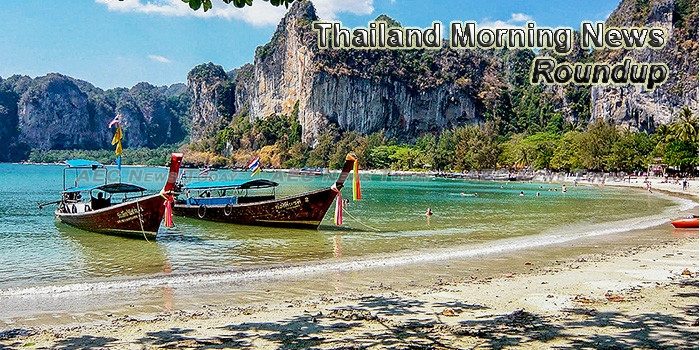 Verdict due in major Thai human trafficking trial
A Thai general is among more than 100 defendants facing a verdict on Wednesday (Jul 19) in a sprawling 2015 human trafficking case which saw thousands of Rohingya and Bangladeshi migrants abandoned at sea and in jungle death camps.
— Channel NewsAsia

New blitz on tax evaders looms
The Revenue Department will tighten law enforcement by filing criminal complaints against those who use fake invoices to evade tax payment and accounting firms as accomplices.
— Bangkok Post

Thai king’s aide named to head multi-billion property bureau
A close aide of Thailand’s King Maha Vajiralongkorn has been named as head of the agency which manages the monarchy’s multi-billion dollar holdings after the law was changed to give him full control of the Crown Property Bureau.
— Reuters

PM cites ‘progress’ on illegal fishing despite EC warning
PRIME MINISTER Prayut Chan-o-cha yesterday expressed his satisfaction over progress in solving illegal fishing, but the European Commission (EC) has suggested that Thai authorities could do more and hinted that the country will maintain its “yellow card” status for another year.
— The Nation

Judge urges PM to probe
APPEALS COURT president Sirichai Wattanayothin, who announced his resignation after being demoted to an inactive position, has urged Prime Minister Prayut Chan-o-cha to look into the nomination for the top job in the judicial branch.
— The Nation

State clears nearly all of rice supply
Eleven rice exporters and traders bid to buy almost all of the 160,000 tonnes of rice in government stocks yesterday, nearly clearing the more than 18 million tonnes of rice that had been stored in warehouses for three years.
— Bangkok Post

Public outrage over navy’s expensive ski trip to Japan
Social media has taken up arms over news that a naval college’s field trip to Japan was marked by Onsen springs and skiing, more so than training and development.
— Prachatai English

Cops get ‘Boss’ docs translated
Police expect to get translated documents to seek the extradition of fugitive Vorayuth Yoovidhya this Friday in the much-delayed proceedings against the Red Bull scion in the fatal hit-and-run case that killed a police officer five years ago, a police source says.
— Bangkok Post

Thai agricultural sector to grow by 2.5 – 3.5% as previously predicted
The Office of Agricultural Economics has maintained its agricultural growth estimate at 2.5-3.5% due to the improving drought and the recovering global economy.
— NBT World (video)

Communications market poised to skyrocket
Thailand’s communications market is predicted to reach 1 trillion baht in value over the next six years, thanks to the popularity of over-the-top (OTT) services and growth in digital transformation.
— Bangkok Post

Monday review: military shopping sprees
Social media has taken up arms the past week over repeated stories of flamboyant military spending, first on a shiny new set of fighter jets and then on a ski trip to Japan.
— Prachatai English

Operators eagerly seek loans for labor skill development
The Ministry of Labor is receiving positive feedback for its interest-free loan program aimed to support entrepreneurs in enhancing the skills of workers.
— NNT

Jet-setting former Thai monk wanted on sex charge being sent home – police
A former Thai Buddhist monk wanted on child sex charges will be sent home from the United States to face trial, Thai police said on Tuesday, the latest scandal to raise questions about the state of Buddhism in a fast-changing society.
— Channel NewsAsia

Global demand for Thai rubber increases 2% in first 5 months
The Office of Agricultural Economics (OAE) said rubber exports during the first 5 months increased by 2% compared to the same period a year before.
— NNT