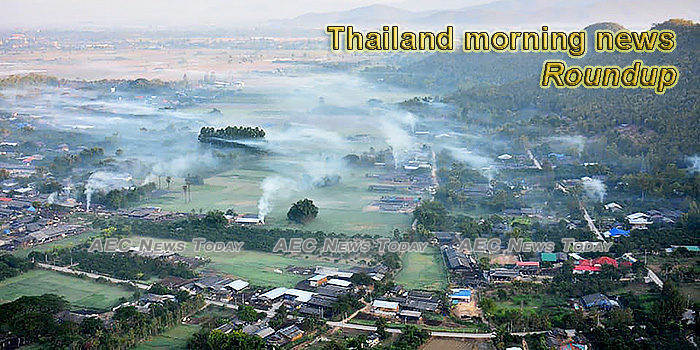 Fourth phase of stimulus on the cards
Finance Minister Uttama Savanayana has instructed the Fiscal Policy Office (FPO) to study a fourth phase of the Taste-Shop-Spend stimulus scheme.
— Bangkok Post

Prominent Thai Politician calls for legalization of brothels and adult shops in Thailand
Thai Civilized party leader, and member of the House committee studying ways to reduce rape and other sexual violations, Mongkolkit Suksintharanont, has proposed that Thailand should permit regulated and licenced brothels and sex toy shops as a way to address the problem.
— The Pattaya News

Teachers owe B1.1 trillion, 16% of total public debt
The debt accumulated by teachers nationwide totals 1.1 trillion baht, about 16% of the public debt, with each teacher owing an average 3 million baht.
— Bangkok Post

Korn says he is setting up new political party
Former finance minister Korn Chatikavanij, who resigned from the Democrat Party on Wednesday, admitted Thursday night that he is in the process of forming a new political party.
— Thai PBS News

Thailand is Sending Submarine Crew to Train in China
The Royal Thai Navy on Thursday said the first group of Thai submariners would receive their training in China, where Thailand’s first submarine fleet in nearly 70 years are being built.
— Khaosod English

Gov’t MP Disappears as Court Convicts Him of Disrupting ASEAN Summit
The Supreme Court on Thursday found a pro-government lawmaker guilty of crashing an international summit back in 2009, weeks after he disappeared from the Parliament.
— Khaosod English

BMA mulls ban on overladen trucks
City Hall is looking to ban overloaded lorries from certain parts of Bangkok in a proposal aimed at not only protecting city roads from further damage but also to reduce hazardous ultra-fine dust particles in the air.
— Bangkok Post

PM orders provinces to ‘dig for water’
All 76 provinces across the country have been ordered to begin khut din laek nam (digging for water) as part of urgent state measures to fight a drought which has already parched 18 provinces.
— The Phuket News

Spending on cyberthreat measures set to soar
Cybersecurity spending in Thailand is expected to soar from this year, driven by the enforcement of the Cybersecurity Act and Personal Data Protection Act (PDPA), as well as the roll-out of the 5G network and Internet of Things (IoT) devices.
— Bangkok Post

Mideast ties strong, says Don
Although absent from a House committee meeting in which he was to be asked to clarify his “misinformed” remarks about the conflict between the US and Iran, Foreign Minister Don Pramudwinai said Thailand’s ties with the Middle East are good.
— Bangkok Post

Thailand gets more businesses to sign up for VAT refund stations
The Revenue Department is accepting applications from entrepreneurs to open permanent VAT refund stations for foreign tourists in Bangkok to speed up the refund process as well as boost sales of retail shops.
— The Star Online

Aviation firms reeling after gusty 2019
Despite higher foreign tourist arrivals and rosy tourism revenue, the financial performance of SET-listed firms operating in the aviation industry has been reeling from a slew of negative factors, sending airline share prices into a nosedive across the board in 2019.
— Bangkok Post

Kratom to Be Removed as Type-5 Narcotic in Thailand
Thailand’s Justice minister has announced kratom will likely be taken off the national narcotics list in June this year.
— Chiang Rai Times

Thai Tycoons May Find Tesco Is Closed
Bangkok’s billionaires don’t usually have to contend with much resistance as they expand.
— Bloomberg

How will Thailand’s FFP play its hand?
Earlier this week, Thai Prime Minister Prayut Chan-o-cha was quoted as saying that rallies were a “waste of time”.
— The Asean Post

Bank of Thailand lands in hot water
It caught almost everyone by surprise when the baht strengthened past the psychological level of 30 baht per US dollar during the New Year holidays.
— Bangkok Post

Inequality has been rising in Thailand since 2015 as the kingdom becomes an aged society in 2021
While Thailand’s economic planners talk of economic reform and taming the strong baht, figures published this week by the National Economic and Social Development Board point to a massive transformation in terms of demographics that will take place in Thailand in the next twenty years.
— ThaiExaminer.com

Drowning still a huge problem for Thai kids
Thailand is famous for many things, one of which is its sandy beaches.
— The Asean Post

Thailand’s PTT plans multi-billion-dollar capex over next five years
State-owned Thai energy group PTT Pcl plans a multi-billion dollar capital spending spree over the next five years, it said on Thursday, that will include expanding in liquefied natural gas and investing in oil and gas pipelines.
— Reuters

Transport Ministry to propose BMTA overhaul plan to Cabinet
The Ministry of Transport has opened a public forum gathering input on plans to restructure the business of the Bangkok Mass Transit Authority (BMTA), which include the renting of some 2,000 buses plus maintenance from private companies and changes to the routing network.
— Newsline (video)

TAT and Chinese Embassy to hand out souvenirs to CNY tourists
The Tourism Authority of Thailand (TAT) and the Chinese Embassy in Thailand will give away commemorative coins marking the 2020 Chinese New Year… to tourists visiting Bangkok’s Chinatown or “Yaowarat” starting next weekend.
— Newsline (video)

Big C confirms Tesco interest
The top boss of Big C Supercenter has acknowledged that the company is keen to acquire Tesco’s Asia business and has submitted its intent to bid.
— Bangkok Post

3 arrested, 500kg of marijuana worth over B7.6m seized
Two men and a woman were arrested and over 500kg of compressed marijuana seized at a checkpoint in Nam Phong district on Thursday.
— Bangkok Post

Flare-up at meeting of House Anti-Corruption and Misconduct Committee
A heated argument erupted, at a meeting of the House Anti-Corruption and Misconduct Committee this afternoon, between the committee chairman, Pol Gen Seripisut Temiyavet on one side and two committee members, Miss Pareena Kraikupt and Sira Jenjakha, on the other side.
— Thai PBS News

Health ministry ordered to pay B2.7m compo to paralysed boy
The Supreme Court has ordered the Public Health Ministry to pay 2.7 million baht to the family of a baby boy left paralysed after his parents’ motorcycle was hit by a hospital vehicle five years ago.
— Bangkok Post

Motion to oust Seripisut from House Anti-Corruption and Misconduct Committee
An urgent motion has been submitted to the House of Representatives, by a group of Palang Pracharat MPs, demanding the removal of Seri Ruam Thai party leader, Pol Gen Seripisut Temiyavet, from the House Anti-Corruption and Misconduct Committee.
— Thai PBS News

10 ways Thailand is moving to a greener future
“Green” is not usually the word that comes to mind when speaking of Thailand, especially when you are speaking through a PM2.5 face mask.
— The Thaiger

Smuggled cigarettes seized in Phang Nga valued at 6 million baht
A former police officer has been arrested in Phang Nga, just north of Phuket, last night for his participation in a cigarette smuggling ring.
— The Thaiger

From Drug Dealer to Stage Actor: Play Gives Youths New Life
Four years ago when he was only 17, Tossawat was arrested for using and selling drugs. But on Tuesday night, he was a leading actor for a play that aimed to inspire teens like him to turn their lives around.
— Khaosod English

Thief arrested in Pattaya after robbing over ten houses, caught on CCTV swimming in victim’s pools
A brazen thief who Pattaya police say broke into more than ten houses in Pattaya has been arrested yesterday, January 15, 2020.
— The Pattaya News

Police track down “the great Bangkok pantie snatcher”
One man’s been busy moving around Bangkok condos and apartments in the northern suburbs and ‘sampling’ a range of women’s underwear and lingerie.
— The Thaiger

Top YouTube makeup artist reveals she’s transgender, says she was blackmailed
One of the most influential makeup artists on social media (yes, it’s a big thing) rocked her fans Monday night with a video revealing she’s a transgender woman.
— The Thaiger

Thailand morning news for May 8