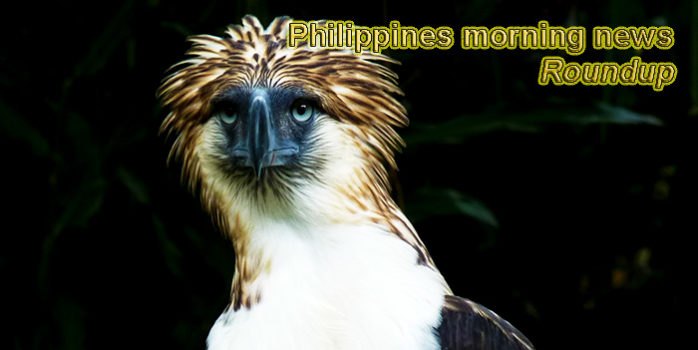 AFP warns soldiers: Coup plotters will be ‘punished harshly’
The Armed Forces of the Philippines (AFP) is policing its own ranks to ensure soldiers would not dare plot a coup d’état against President Rodrigo Duterte.
— CNN Philippines

Cyber-security threats to cost PHL organizations $3.5 billion in potential economic losses
A STUDY by Frost & Sullivan, commissioned by Microsoft, has revealed that the potential economic losses in the Philippines due to cyber-security incidents can hit a staggering $3.5 billion or 1.1 percent of the Philippines’s total GDP of $305 billion.
— Business Mirror

PH to grow 6-7% this year as gov’t, households resume spending binge
The Philippine economy can still grow by as much as 7 percent this year thanks to the ramping up of government spending in the second semester, according the country’s central bank chief.
— Inquirer.net

Philippines: UN resolution builds pressure on architects of deadly “war on drugs”
Responding to the UN Human Rights Council voting in favour of a resolution to monitor and report on the critical human rights situation in the Philippines – including unlawful killings in the context of the “war on drugs” – Nicholas Bequelin, Amnesty International’s Regional Director for East and Southeast Asia said:
— Amnesty International

‘Job seekers law to shed P3 billion from government’s coffers’
THE government is set to lose P3 billion in revenues with the implementation of a new law that seeks to boost the chances of some 1.3 million first-time job seekers to land a job.
— Business Mirror

GOCC dividends reach record high of 61.3 billion in July —DOF
Total actual dividend contributions remitted by 53 government-owned and – controlled corporations (GOCCs) to the Department of Finance (DOF) as of July 1 have already reached another record-high of P61.3 billion, even breaching the milestone it reached last year at P51.24 billion.
— Business Mirror

PRRD shrugs off UN rights council nod to probe killings
President Rodrigo Duterte on Thursday shrugged off the United Nations Human Rights Council’s (UNHRC) move to adopt a resolution that would allow the body to investigate the human rights situation in the Philippines.
— Philippine News Agency

216M Pinoys seen in 2058
The Philippines’ population is poised to double to over 216 million by 2058 such that the country’s chief economist urged the full implementation of the reproductive health law to ensure that the increase in number of Filipinos will not hamper the government’s ultimate goal to reduce poverty incidence.
— Inquirer.net

Davao cops nab 1,661 for illegal drugs in less than 3 years
A total of 1,661 persons have been arrested by the Davao City Police Office (DCPO) during anti-illegal drug operations since December 5, 2017 to June 30 this year.
— Philippine News Agency

US, Philippines face moment of treaty truth
The Philippines and United States are set to review their mutual defense alliance, critically timed deliberations that will have major implications for regional security, including in the South China Sea.
— Spratly Islands

Law waives gov’t fees for first-time jobseekers
Bernadette Ignacio has long been wanting to look for a job but worries that the process of getting documents will not only be tedious but also costly.
— Inquirer.net

‘Pay P3B in withholding taxes’
THE Bureau of Internal Revenue (BIR) has issued another set of notices that require employers involved in online gaming operations to pay withholding tax discrepancies amounting to about P3 billion.
— The Manila Times

Makati to auction properties with unpaid taxes
The Makati City government has started to prepare for a public auction of delinquent properties in order to compel the collection of P5.51 billion in unpaid taxes.
— Rappler

Now Telecom exploring tie-up with Mislatel
Now Telecom Inc., a company controlled by the Velarde family, said it is open to a partnership with Dito Telecommunity (formerly Mislatel) owned by Davao-based businessman Dennis Uy to provide faster broadband connectivity in the country.
— Manilastandard.net

Manila bank robbed; inside job eyed
A Metrobank branch in Divisoria, Manila was robbed by at least seven men before banking hours yesterday morning, with someone in the bank seen in surveillance footage letting the robbers in.
— The Philippine Star

DOLE: 7,000+ POGO workers face deportation for lack of AEP
Over 7,000 foreign nationals (FN) may soon face possible deportation for their failure to secure work permits, according to the Department of Labor and Employment (DOLE).
— Business Mirror

Bring Asean to the table
Three years after the Philippines won its landmark case against China, the Duterte administration appears consistent in applying a different policy toward Beijing.
— Philippine Daily Inquirer

3% coconut biodiesel pushed
The United Coconut Association of the Philippines (UCAP) is lobbying for the immediate implementation of increased coconut content in diesel to three percent by yearend.
— The Manila Times

EV measure, 3 other energy bills pushed in next Congress
A legislative measure to reinforce prospective commercial rollout of electric vehicles (EVs) will be high in the agenda of the Senate Committee on Energy in the 18th Congress which will formally convene toward the end of this month.
— Manila Bulletin

Bill filed to limit ‘public utility’ to power, water
Camarines Sur Rep. Luis Raymund Villafuerte has filed a bill that seeks to limit the definition of a “public utility” by amending the 82-year-old Public Service Act.
— The Philippine Star

AmCham urges Duterte to nix anti-endo bill
The American Chamber of Commerce of the Philippines (AmCham) is urging President Rodrigo Duterte not to support the Security of Tenure bill that aims to ban the practice of “endo,” an official of the business group said on Thursday.
— ABS-CBN News (video)

Indonesian tourism trade expo opens Friday in Davao City
The Consulate General of the Republic of Indonesia will hold a three-day expo here with focus on tourism, trade, and food on Friday (July 12).
— Philippine News Agency

Dominguez eyes Customs strike team vs garbage imports
The Department of Finance said Thursday it ordered the Bureau of Customs to study the possible formation of a special strike team to guard against the entry of waste materials that other countries are attempting to dump in the Philippines.
— The Philippine Star

P135-M ecopark to rise in old dumpsite in Cagayan de Oro
City officials on Thursday, July 11, finally got the ball rolling on an ecopark project in an old dumpsite.
— Rappler