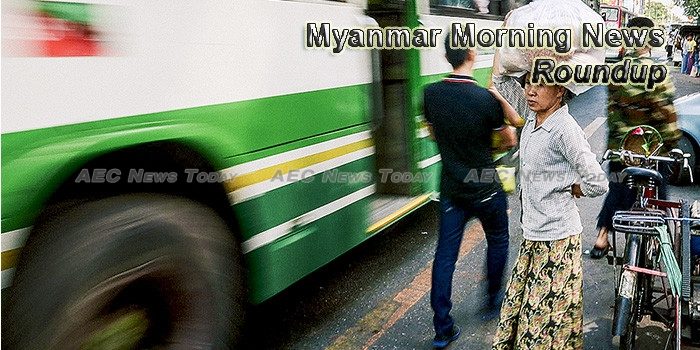 A glance at property market in Yangon
Yangon, once famous as the seat of government, has turned itself into economic hub of the country, and is home to nearly seven million people.
– Global New Light of Myanmar

Minister admits bribery exists in government departments
The government is aware that bribes are being demanded by certain officials from members of the public who come to offices seeking forms and letters of recommendations when applying for jobs, said U Thein Swe, Union Minister for the Ministry of Labour, Immigration and Population.
– The Myanmar Times

China owns 44% of external debt: MP
Loan contracts with China should be reviewed and debt relief negotiated to cut the burden on the economy, according to Khin San Hlaing, MP for Pale.
– Eleven Myanmar

Mandalay port to facilitate regional and Chinese trade via waterway
Developers of Mandalay port will begin the construction work in November 2018, according to the Directorate of Water Resources and Improvement of River (DWIR).
– The Myanmar Times

Turning on the Lights in Rural Myanmar
The late afternoon breeze brings the village of Sai Pyun out— children race each other on bikes, weaving through neighbors fetching water in metal jugs on their heads or yellow plastic tanks carried on their shoulders, and through strutting hens and their chicks pecking at feed on dusty, sun-cracked roads.
– Global New Light of Myanmar

Falling Chinese demand sours sugar market
Sugar is being stockpiled for potential export due to low demand from China, according to sugar merchants in Mandalay.
– Eleven Myanmar

Grab is adding Myanmar’s Wave Money to its mobile wallet
Ride-hailing and mobile payments startup Grab is partnering with Wave Money in Myanmar.
– Tech in Asia

Culture Ministry to Nominate Bagan, Mrauk U, Shwedagon for UNESCO Recognition
The Union minister of religious affairs and culture U Aung Ko said his ministry plans to nominate Arakan State’s Mrauk U and Shwedagon Pagoda for UNESCO’s list of culturally significant sites after Bagan.
– The Irrawaddy

Rakhine parliament accepts new-town proposal
A proposal to the Rakhine State parliament that calls for implementation of a new town in Mrauk U Township has been accepted.
– Eleven Myanmar

Maungdaw told to expect attacks
Villagers in Maungdaw are being asked by the Rakhine State chief minister to increase security and take action against alleged Bengali militants.
– Eleven Myanmar

Myanmar Says it Will Not Grant Visas for UN Fact-finding Mission on Rakhine
Myanmar doubled down Thursday on its refusal to cooperate with United Nations’ efforts to investigate reported army atrocities in the strife-ridden western state of Rakhine, with the foreign ministry saying it has ordered the country’s embassies not to issue visas to UN investigators.
– Radio Free Asia