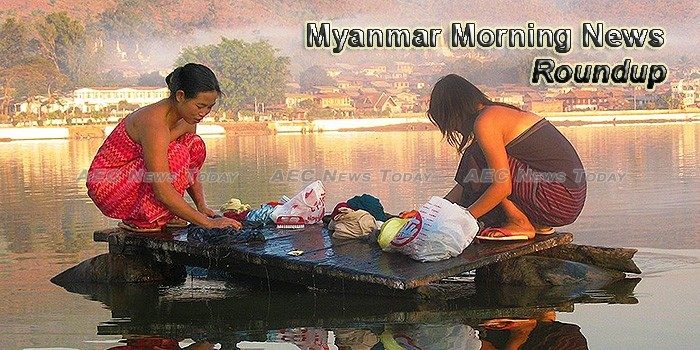 Another Mass grave of Rohingyas found in Northern Maungdaw
Another mass grave was found on 18th February 2017, whom were earlier killed by military. In this tragic incidence military were disinterring the remains of the corpses to hide the EVIDENCES of their ATROCITIES. Earlier in October, November and December many mass graves were found since the start of the military operation in Arakan state.
— Rohingya Vision

Govt to probe villagers’ claims over gold mines
After two months of protests by farmers from Mandalay’s Thabeikkyin township over alleged encroachment of their land by gold miners, the regional government has decided to investigate their claims.
— Myanmar Times

Clearer policies and liberalisation needed: Bloomberg summit
There is no country other than Myanmar where foreign investors can come and invest, where the democratic transition is relatively smooth and where an economy opens up to the world at the same time, said one of the local tycoons at the Bloomberg Invest Myanmar summit held on March 9 in Yangon.
— Myanmar Times

AboitizPower explores Myanmar, Indonesia amid PH power oversupply
With the Philippines experiencing an oversupply in power generation that could last up to 7 years, Aboitiz Power Corporation has set its sights on hydropower projects in Myanmar and Indonesia to continue growing its business.
— Rappler

MPs to be invited to project meetings for advice
When the government holds meetings on drawing and implementing economic projects, members of Parliament will be invited for suggestions, said Maung Maung Win Deputy Minister for Planning and Finance at a parliamentary session.
— Eleven

As Civilian Displacement Surges, Myanmar Limits Aid Access
Seated amid his family’s simple possessions in a bamboo and thatch-roofed shelter, Saw Maung Care describes with anguish how they lost their home and livelihood as conflict flared in southeastern Myanmar in September.
— Voice of America

Myanmar Legal Team to Appeal Verdict Against Migrant Workers in Thailand’s Highest Court
The Myanmar government is sending a special legal team to file a second appeal of the verdict against two migrant workers from the country who were sentenced to death in Thailand for the 2014 murder of a British couple at a Thai resort, their lawyer said Wednesday.
— Radio Free Asia

Zone-B of Thilawa SEZ to affect 44 households
The government needs to confiscate land for the implementation of the first phase (100-hectare) included in the Zone-B of the Thilawa Special Economic Zone project, and it will affect 44 households, according to the resettlement plan.
— Eleven

With a stroke of red pen, Myanmar’s Rohingya fear losing right to return
Since security forces swept into their villages in northwestern Myanmar late last year, around 75,000 Rohingya Muslims have fled across the nearby border to Bangladesh. Many now fear that the authorities in Myanmar could make their displacement permanent.
— Today Online

ASEAN REGULATORY BRIEF
The Singapore government will include four major amendments to the Computer Misuse and Cybersecurity Act in view of growing cyber threats.
— Asean Briefing

MOU to hand over Myanmar institute
Singapore’s Emeritus Senior Minister Goh Chok Tong has overseen the signing of an agreement that will facilitate the handover of the Singapore-Myanmar Vocational Training Institute (SMVTI) to Myanmar over three years.
— The Straits Times

Myanmar joins global drive to raise climate awareness
FOR THE FIRST time, Myanmar will join 172 other countries in taking action on climate change, with a public celebration of Earth Hour 2017 on March 25, according to the World Wide Fund for Nature (WWF), which is organising the campaign.
— The Nation