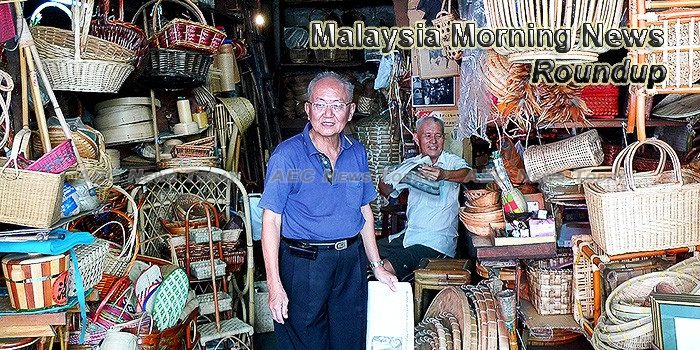 Strong 2Q for airports, but tamer second half expected
While analysts anticipate a strong second quarter (2Q) for airports under the purview of Malaysia Airports Holdings Bhd (MAHB), they believe the second half of 2017 (2H17) will be tamer in terms of passenger volume.
— The Borneo Post

Budget deficit target to remain intact, says RHB Research
RHB Research Institute Sdn Bhd said the Malaysian government is unlikely to make any revisions to its 2017 Budget for now, despite a sharp pull-back in oil prices of late.
— The Edge Markets

Food consumption and belief systems in Malaysia, the benchmark for co-existence ― JD Lovrenciear
The breakout news that is being widely-shared and debated now i.e. the claims, allegations and counter defences surrounding a non-Muslim canteen operator of a local polytechnic, indeed offers a last opportunity for the government to measure up once and for all.
— The Malay Mail Online

How to Invest in Malaysia: Asia’s Easiest Place to Buy Land
Land is one of the few investments which can be seen and touched. Not everyone cares about that sort of thing. But some people do, and these are certainly attributes which stocks and bonds don’t have.
— InvestAsian

ASIC seals Malaysia fintech agreement
ASIC’s agreement with the Malaysia Securities Commission (SC) will enable both regulators to refer fintech businesses to each other for advice, as well as provide a framework for information sharing, according to a statement.
— InvestorDaily

No more signing for card payments
Goodbye signatures, hello personal identification numbers (PIN). It is all systems go for the nationwide transition to PIN and Pay tomorrow.
— The Star Online

No One Is Safe From Cyberattacks, Security Experts Warn
Consumers should not lower their guard when it comes to cyberattacks as everyone is at risk, security experts warned.
— Malaysian Digest

‘More crashes but fewer fatal ones during festive period’
The number of road accidents in the first 11 days of ‘Op Selamat 11/2017’ from June 18 increased by 10 per cent over the corresponding period last year but the number of fatal accidents and deaths dropped by 17 per cent and 21 per cent, respectively, it was disclosed yesterday.
— The Borneo Post

Songkhla keen on 24-hour checkpoint with Malaysia
Traders and officials alike are looking forward to seeing the main border crossing with Malaysia open around the clock, but warn the benefits for tourism could be mixed.
— Bangkok Post

Analysts have mixed views on plantation firms’ earnings
There are mixed views on how plantation companies’ earnings will fare in the coming months given the weaker crude palm oil (CPO) prices and the solid recovery in palm oil production from the first quarter of this year.
— The Star Online

Aeon sells its Mahkota Cheras shopping mall
Aeon Co (M) Bhd is selling the Aeon Mahkota Cheras Shopping Centre and the freehold land on which it sits for RM87.8mil.
— The Star Online

Bank Negara flags another 14 unapproved firms, websites
Bank Negara Malaysia (BNM) has added another 14 companies and websites under its Financial Consumer Alert list which are neither authorised nor approved under the relevant laws and regulations.
— The Star Online

Neutral Malaysia hopes to mediate Qatar crisis
Malaysia will continue to remain neutral despite offering to play a constructive role in the ongoing conflict between Qatar and other Arab countries.
— The Star Online