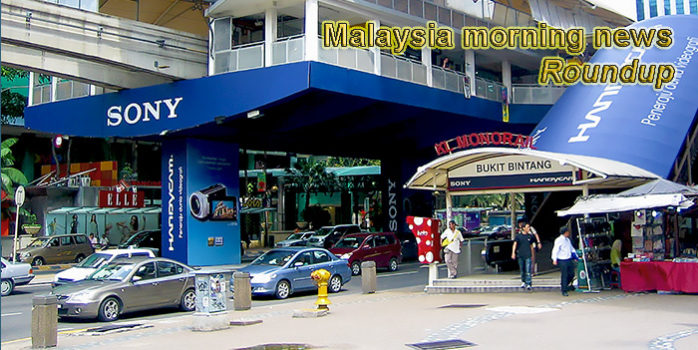 Mahathir denies he will stay beyond three years but Anwar is unfazed
​Rumour has it that Pakatan Harapan is pushing Prime Minister Tun Dr Mahathir Mohamad to set a date for his departure but in an interview with CNBC, the elderly statesman said he will not go beyond three years, instead of two years as agreed by the coalition partners. The gay sex video allegedly exposing Azmin […]
— The Independent

Malaysia’s MOE orders three-day closure of all 475 Pasir Gudang schools following latest pollution incident
Malaysia’s Ministry of Education (MOE) has instructed all 475 schools in Pasir Gudang to close for three days starting today (25 Jun) after residents reported experiencing vomiting and difficulty in breathing as a result of the latest pollution incident in the Johorean town.
— The Online Citizen

Malaysian economy to see better growth for August-October period
Malaysia’s economic growth is expected to show a better performance in August to October 2019, according to the Department of Statistics.
— The Sun Daily

Envoy proposes re-establishing direct KL-Rome air connectivity to boost tourism
Italy’s Ambassador to Malaysia, Cristiano Maggipinto, has proposed for Malaysian airlines to consider establishing direct flight for the Rome-Kuala Lumpur sector as part of its strategies to boost tourism between Italy and Malaysia.He said Malaysia has potentials and fit the bill of Italian holidaymakers.
— The Sun Daily

Malaysia accepts international court ruling on Pedra Branca, says PM Mahathir
Malaysian Prime Minister Mahathir Mohamad reiterated on Tuesday (Jun 25) that Putrajaya has accepted the ruling of the International Court of Justice (ICJ) over Pedra Branca, citing it as an example of how the Association of Southeast Asian Nations (ASEAN) member states have worked together based on mutual respect.
— Channel NewsAsia

Malaysia to maintain strong business relationship with China
Malaysia will maintain its strong business relationship with China and no Chinese investor will feel left out in this regard, says Finance Minister Lim Guan Eng.Speaking to reporters at the Malaysia SME Business Summit here today, he refuted Ayer Hitam MP Datuk Seri Wee Ka Siong’s accusation that the Pakatan.
— The Sun Daily

Fama to set up halal unit to help entrepreneurs
The Federal Agricultural Marketing Authority (Fama), with the cooperation of the Islamic Development Department (Jakim), is setting up its own halal unit to facilitate entrepreneurs in obtaining halal certificate to market their products.
— The Sun Daily

Resuscitating Malaysia Airlines now is a tough call: Jomo
The capital-intensive nature of the airline business, especially with the current business conditions, makes it more difficult to resuscitate Malaysia Airlines Bhd (MAB).”The airline industry is very tough; it is not easy.
— The Sun Daily

Miti expects slower growth for manufacturing, services sectors this year
The International Trade and Industry Ministry (Miti) is projecting lower growth in the manufacturing and services sectors of 4.8% and 5.7% respectively for 2019. International Trade and Industry Minister Datuk Darell Leiking (pix) said the lower projection is due to uncertainty caused by trade tensions that may.
— The Sun Daily

Oil prices likely to linger around US$65-75 per barrel in 2H2019
Oil prices are expected to trade around US$65 to US$75 per barrel in the second half of this year (2H19), but continuous geopolitical conflicts could push it higher, said FGE chairman and founder, Dr Fereidun Fesharaki.FGE is a leading consulting group focusing on the global oil and gas markets.
— The Sun Daily

Mahathir: Moody’s downgrade of Petronas will not affect company
The recent downgrade of Petroliam Nasional Bhd’s (Petronas) domestic issuer and foreign currency senior unsecured ratings by Moody’s Investors Service is not expected to affect the national oil and gas company.
— The Sun Daily

100 basic goods programme to reduce prices
The National Cost of Living Action Council (MTSHN) will implement the 100 Basic Goods Programme (BA100), an initiative which is aimed at reducing the prices of goods and the.
— New Sarawak Tribune

Anwar’s challenge on constitutionality of NSC now fixed for Oct 30
The Port Dickson MP wants the Federal Court to decide whether the NSC Act is unconstitutional.
— FMT News

Jobless man gets 5 years’ jail for robbing Grab driver
An unemployed man who robbed a Grab driver last year was sentenced to five years’ jail and a stroke of the cane, by the Ampang Sessions Court here.Judge Suzanna Hussin meted out the sentence on Mohammed Azlan Shah Zamri, 25, and ordered the sentence to run from the date of arrest on Nov 1, last year, after the.
— The Sun Daily

TRC Synergy tenders for projects worth RM2bil this year
Construction player TRC Synergy Bhd is actively bidding for RM2 billion worth of projects this year while striving to reduce reliance on the segment.
— The Star Online

Sarawak Report: Sept 10 hearing for Terengganu Sultanah’s application
Terengganu Sultanah Nur Zahirah’s (pix) application for her defamation suit against Sarawak Report editor Clare Rewcastle Brown and two others to be disposed via summary judgment has been fixed for hearing on Sept 10.Her lawyer, Datuk Haziq Pillay Abdullah disclosed this to reporters after case management of the.
— The Sun Daily

LGE: MACC forfeiture list just tip of iceberg, press clubs implicated too
The civil forfeiture filed by the Malaysian Anti-Corruption Commission (MACC) against 41 individuals and entities to recover RM270mil from 1MDB is just the tip of the iceberg, says Lim Guan Eng.
— The Star Online

Want to compete? Prepare for digitalisation, finance minister tells SMEs
Small and medium enterprises (SMEs) have to be prepared for digitalisation in order to be able to compete effectively in the challenging business environment with the rise of new technology. Finance Minister Lim Guan Eng.
— Malay Mail

Winning offer price for Gamuda’s four toll highways
Analysts are positive on the price offered to Gamuda Bhd (Gamuda) from the Ministry of Finance (MoF) for the take-over of Gamuda’s four highways for a collective enterprise value of RM6.20 billion. This translates to an effective equity value of RM2.36 billion for all four highways – namely KESAS, SPRINT,
— The Borneo Post

Uniqlo launches musical new social campaign
There is a huge opportunity for brands like Uniqlo to connect with today’s generation and expand their reach by embracing the native, natural and creative form of content on TikTok.
— FMT News

Highway concession takeover: PLUS will wait for government’s decision
The country’s largest expressway service provider, PLUS Malaysia Bhd (PLUS) is willing to review the concession agreements should the government want to take over PLUS operated toll highways. “We are a concession company and we have signed agreements with the government.
— The Sun Daily

UPUOnline appeal results out tomorrow
The Sijil Pelajaran Malaysia (SPM) holders who have filed UPUOnline appeals with regard to entry into foundation and diploma programmes at public universities will know the results from noon tomorrow (June 26). Education Ministry said the results would be made available until 11.59 pm on July 2 through.
— The Borneo Post

Five policemen remanded over RM6,000 bribe
Five police personnel have been remanded for five days to assist investigations into allegations they received bribes amounting to about RM6,000 last March.The remand order until June 29 against the suspects aged between 25 and 50 was issued by Magistrate Muhammad Nazrin Ali Rahim at the Melaka Court Complex, Ayer Keroh.
— The Sun Daily

Land reclamation not the lone reason for drop in seafood catch: Dr Afif
Apart from land reclamation, factors such as over-fishing and pollution have also contributed to a depletion of marine resources in Malaysia.Penang state executive councillor in charge of agriculture Dr Afif Bahardin (pix) said a rising population has led to a higher demand for seafood, and that has led to.
— The Sun Daily

Malaysia Airlines’ Amal to fly some 20,000 haj pilgrims
Amal, the pilgrimage arm of Malaysia Airlines Bhd (MAB), is set to transport up to 20,000 pilgrims for this year’s haj season with the first flight scheduled to depart.
— New Sarawak Tribune

Govt to rope in co-ops to tackle rising prices of goods
The deputy prime minister says the cooperatives, with a membership of 6.1 million, can play a role in helping to manage the rising cost of living.
— FMT News

Harry and Meghan’s new home cost $3 million to refit
Prince Harry and his wife Meghan’s new home in Windsor cost £2.4 million ($3.05 million, 2.7 million euros) to renovate before they moved in, royal accounts showed Tuesday. Queen Elizabeth II’s grandson and his wife moved into Frogmore Cottage on the Windsor Castle estate before the birth of their son Archie on.
— The Borneo Post

Labuan IBFC, Swiss Re to enhance awareness on captive insurance
The Labuan International Business and Financial Centre (Labuan IBFC) and Swiss Re Corporate Solutions are collaborating to enhance awareness on captive insurance in Malaysia and Asia. Both will jointly organise a conference here on Aug 7, 2019, themed ‘Adding Confidence to Captives: Managing Volatility via.
— The Borneo Post

BLand earnings boosted by investment-related income
Berjaya Land Bhd (BLand) recorded a net profit of RM181.48 million in the three-months ended April 30, 2019 compared with a net loss of RM92.15 million a year ago due to higher investment related income.
— The Sun Daily

Malaysia Morning News For May 16