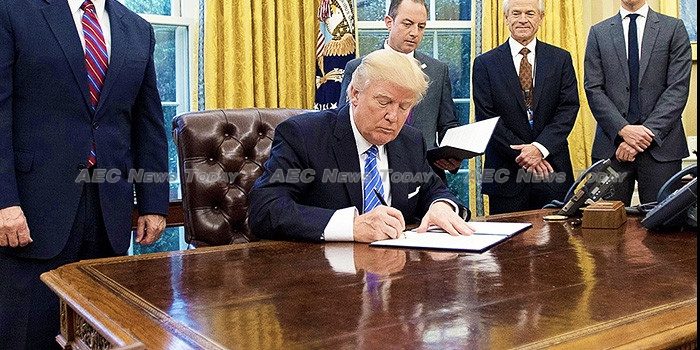 US President Donald Trump’s decision to withdraw from the Trans-Pacific Partnership (TPP) has set in motion a total re-think of trade policy in Malaysia.

Malaysia’s relations with the United States are in a state of flux. There is little comfort for Malaysian policymakers in what’s been coming out of Washington.

Trump has classified Malaysia (along with Thailand, Indonesia and a host of other countries) as a trade ‘cheater’, largely because Malaysia has a large trade surplus with the United States.

The US government is investigating what is behind Malaysia’s bilateral trade surplus, a task that is complicated by the differences in data between the United States Department of Commerce and Malaysia’s Ministry of International Trade and Industry (MITI).

There is no doubt that the Malaysian government’s trade agenda took a beating with Trump’s decision not to go ahead with the TPP, what with the great enthusiasm that the Prime Minister had evinced in the project.

US withdrawal from the TPP leaves Malaysia with tough choices about how it will re-cast its trade policy now. Without the United States in the TPP, there is little in it for Malaysia.

Minister of International Trade and Industry Dato’ Sri Mustapa Mohamed was reported in March 2017 as declaring that Malaysia was not interested in a TPP agreement without US participation.

The reasoning was clear: the TPP was Malaysia’s mechanism to connect with the US economy. Without the United States, improving trade with Peru, Mexico and Canada did not mean much; the trade potential that these countries can offer Malaysia is limited.

The minister may have now shifted position a little into being persuaded that a TPP-11, or a TPP without the United States, has some merits.

A number of factors might lead Malaysia to think that a TPP-11 makes sense.

If Australia, New Zealand, and Japan have an interest in TPP-11 — in the expectation that at a later point in time the United States can be cajoled into joining it — Malaysia might agree to wait it out too. President Trump, who is given to flip flops, might turnaround.

Japan has also not given up hope on Trump. Prime Minister Shinzō Abe seems to believe that he might be able to convince Trump, as time passes, on the merits of joining the TPP.

Malaysia does not have a bilateral agreement with Canada, so the TPP-11 could serve a way towards that goal.

Malaysia is also actively exploring its trade options with Latin America. The TPP-11 includes some of these countries, namely Peru, Chile and Mexico. Malaysia has no agreements with Peru or Mexico. Of course, Malaysia’s trade with these countries is extremely limited at present and neither is it likely to deepen to any significant extent in the near future.

The most persuasive factor that drives a re-think on TPP-11 is policy inertia. Slipping in behind Japan, Australia, and New Zealand for strategic reasons appears a convenient easiest option.

Malaysia might as well stay within the fold whatever the chances of success. Malaysia, for its part, feels comfortable as part of this ‘coalition’. Although there is likely no immediate payoff to being within the grouping, there is a sense of security in being in agreement with the big players. The inertia against striking out on one’s own is powerful.

Even though there is a willingness to be a part of this grouping, Trade Minister Mustapa argues that TPP-11 should be re-negotiated. With the United States out, the configuration changes; accordingly what is exchanged and negotiated will have to change. While some countries want to make more changes to the original TPP than others, the main players understand that renegotiation would be fraught with complexity. But without renegotiation, as Mustapa says, there may be little of value with the United States out.

With recent developments there is reason to be cautious. Malaysia’s interests are different from the big three in the TPP-11. While it is fine to stay in the fold, the trade minister will want an outcome that serves the country’s interests.

It seems that Mustapa Mohamed keenly understands this reality in pressing for a renegotiation of the original TPP and in formalizing a trade relationship with the remaining 11 members.

This article was written by Dr Shankaran Nambiar, a senior research fellow at the Malaysian Institute of Economic Research (MIER) and an author of Malaysia in Troubled Times. It first appeared on East Asia Forum under a Creative Commons License and is produced here with its permission.

What Happened to Russia’s ‘Pivot to Asia’?