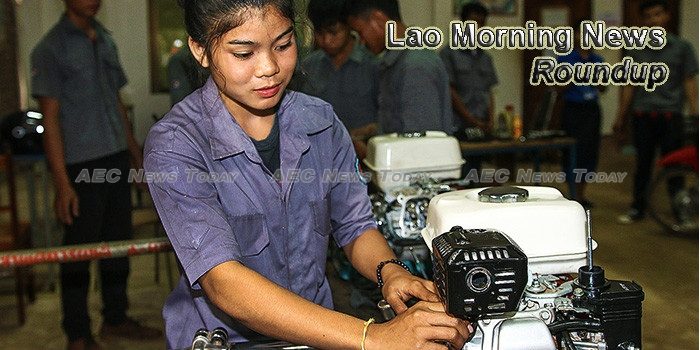 Thoulakhom-Pakngum road heads out of the slow lane
Work is accelerating on the 47 km road upgrade from Nanokkhoum village in Thoulakhom district, Vientiane province, to Naxay village in Pakngum district in the capital following earlier delays, according to the contractor.
– Vientiane Times

Financial Officials Enrich Knowledge on SME Lending Risk Management
Fifty representatives from central and business banks, financial institutes, the Ministry of Industry and Commerce, and the Lao National Chamber of Commerce and Industry are upgrading their knowledge on risk management of small and medium enterprise lending.
– Lao News Agency

Borikhamxay eyes mega investment this year
Borikhamxay anticipates that the energy sector will be key to bolstering the value of investment in the province this year, which is estimated to be worth as much as 900 billion to 1.3 billion kip.
– Eleven Myanmar

GE opens Laos office, its 10th in Southeast Asia
Expanding its presence in Southeast Asia, General Electric recently opened an office in Laos, in the Vientiane Centre on the capital’s Khouvieng Road.
– The Nation

Southern Islands Report Extreme Downtrend in Tourism for 2017
With tourism as a primary focus for the government this year, the rapid decline of tourists visiting the twin islands of Don Det and Don Khon in the Si Phan Don (4,000 Islands) of Khong district, Champassak province has local authorities worried.
– The Laotian Times

Yunnan pushing trade, investment between Laos, China
Trade value between Laos and China’s south-western Yunnan province has reached US$1.37 billion, making up 40 percent of the total trade between the two nations.
– Vientiane Times