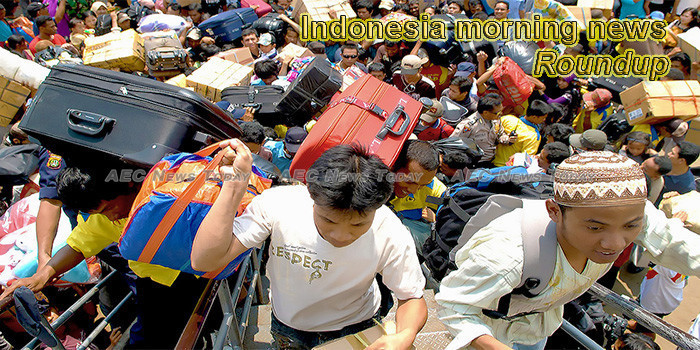 Shangri-La Dialogue Signals Closer Military Cooperation Between Indonesia and the US
Defense Minister Ryamizard Ryacudu met his United States counterpart, acting Secretary of Defense Patrick Michael Shanahan, during a ceremony to commemorate the 70th anniversary of diplomatic relations between the two countries at the Defense Ministry headquarters in Jakarta on Thursday.
— Jakarta Globe

Indonesian cities empty out as millions leave to mark end of Ramadan
Millions of Indonesians were on the move at the weekend as they returned home to villages and towns across the world’s biggest Muslim nation to mark the end of Ramadan.
— The Nation

Dozens Indonesian Migrant Workers Deported
As many as 81 Indonesian migrant workers in Malaysia who are being deported after paying MYR 135 arrived at the Dumai International Port together with the homecomers on Saturday, June 1, 2019.
— Tempo.co

Indonesia excited about 5G, but…
There is little doubt about it, the fifth-generation cellular network frequency (5G) is in our near future.
— The Asean Post

Indonesia vows to continue structural reforms: Darmin
The government pledges to push forward with its structural reforms after Indonesia showed an improvement in the International Institute for Management Development (IMD) World Competitiveness Ranking.
— The Jakarta Post

Is the fish you eat caught by ‘slaves’?
Enslaved, beaten, malnourished, and so desperate for water he had to collect condensation to drink: Rahmatullah left Indonesia seeking better prospects at sea – instead he endured a living hell.
— The Asean Post

Bali volcano spews ash in new eruption
A volcano on the Indonesian island of Bali erupted Friday, spewing a plume of ash and smoke more than 2,000 metres (6,500 feet) into the sky.
— Intellasia

Measles on the rise in Indonesia, fears of impact on Australia
Health authorities fear an increase in measles cases in Australia could worsen unless vaccination rates in Southeast Asia improve.
— ABC.net

Ragunan Zoo expects 800,000 visitors over Idul Fitri
The Ragunan Zoo management said on Saturday that it expected 800,000 people to visit the South Jakarta zoo during the long Idul Fitri holiday from June 6 to 16.
— The Jakarta Post

Ministry records surpluses of meat, eggs throughout Ramadan
SharesThe Agriculture Ministry is claiming that the supply of meat and eggs was more than enough to meet the high demand for them during Ramadan.
— The Jakarta Post

Shopping trends for Eid-ul-Fitr
Southeast Asia is home to over 245 million Muslims who observe the fasting month of Ramadan.
— The Asean Post

Indonesia vs China in a fish fight at sea
The catch has expanded dramatically, the fish are bigger and new canneries have sprung up all around Indonesia, all apparent signs of a hale and hearty fisheries industry.
— Asia Times

Oil potentials in Indonesia need more exploration: association
President of the Indonesian Petroleum Association (IPA) Tumbur Parlindungan expects oil and gas exploration activities in Indonesia to be encouraged given that there are still many oil reserves in the Southeast Asia region.
— Antara News

First Responders: Indonesia’s bikers who escort ambulances
Motorcyclists in Indonesia are providing a lifesaving service, escorting ambulances through gridlocked cities to make sure they reach patients as quickly as possible.
— Al Jazeera

Borobudur Temple Visitors Increase during Homecoming
The Borobudur Temple in Magelang, Central Java was visited by many of the people travelling on their homecoming trip.
— Tempo.co

Indonesia parades foreigners arrested for drugs in Bali
Indonesian police in Bali have arrested an American, two Spaniards and two Russians for selling cocaine on the island.
— The Star Online

US, Indonesia agree to resume training for Kopassus
The United States and Indonesia have agreed to improve their defense cooperation, especially in medical rehabilitation and ways to resume ties with the Army’s Special Forces Command (Kopassus).
— The Jakarta Post

Police Chief Warns Officers of Terror Threat in Homecoming Season
National Police Chief Tito Karnavian instructed all of his personnel to anticipate the possible terror threats during the Eid homecoming and returning flow by coordinating with the officers serving at homecoming routes.
— Tempo.co

Referendum denies history: Indonesia Ulema Council
Deputy Chairperson of the Indonesian Ulema Council Zainut Tauhid Saadi said the demand for referendums from several regions to separate themselves from the the Republic of Indonesia was a form of historical.
— Antara News

Sunny Side Up Tropical Festival to boast Flume, Grace Carter in first line-up
The long-awaited Sunny Side Up Festival will return to Bali on Aug. 24.
— The Jakarta Post

Flag ceremony, calls for national unity mark Pancasila Day
Citizens across the country celebrated on Saturday the birth of Pancasila, the state ideology.
— The Jakarta Post

Transjakarta gears up for Idul Fitri holiday
For the Idul Fitri holiday Transjakarta plans to serve passengers with additional buses to cater to passengers departing for their home towns from bus terminals and a special schedule for routes to tourist attractions, while crew members wear special Muslim attire during the celebration day.
— The Jakarta Post

Interfaith community in Semarang holds purification ritual to commemorate Pancasila Day
A ruwat (traditional purification ritual) was performed during an interfaith gathering at the Johannes Maria Presbytery of Soegijapranata Catholic University in Semarang, Central Java, on Saturday to express the hope of restoring the country’s unity after the divisive political contest of the recent 2019 general elections.
— The Jakarta Post

Mental health in Indonesia
Mental health is a major and highly stigmatised problem in Indonesia. Some villages still practise ‘pasung’ where the mentally ill are kept in cages separate from the family home–because of a taboo.
— ABC.net

Indonesia intensifies efforts to sell its products in Africa
Several Indonesian firms have taken part in exhibitions held in Africa and utilized opportunities for continued expansion into the African market.
— Antara News