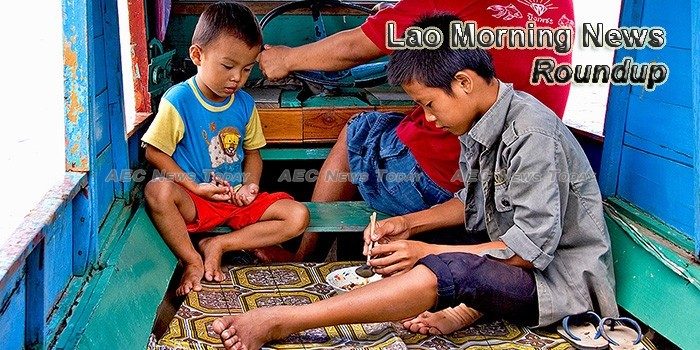 You’re Really *Not* Having a Bad Day (video)
If you think you’re having a bad day spare a thought for the unfortunate fellow in the video above. Thought to show members of a Hmong hill tribe somewhere in Lao PDR, the video dramatically illustrates the almost crippling effects a pair of sharp pointed claws can have when seizing a man by his man bits.
— AEC News Today

Was cash bust at Lao border part of bigger operation?
Suspecting that the two Lao men arrested on Tuesday trying to cross the border into Laos from Nong Khai with more than Bt98 million in undeclared Thai banknotes might be part of a larger criminal undertaking, Thai Customs officials plan to discuss the matter with their Lao counterparts.
— The Nation

Laos Cracks Down on Trafficking on Border With Thailand
Lao authorities are tightening controls at a crossing on the border with Thailand, posting warning signs and interviewing travelers in a bid to end the exploitation of young Lao citizens for sex or labor in the neighboring country.
— Radio Free Asia

Xedon river flood prevention studied with Chinese company
A feasibility study for a flood prevention project on the Nam Xedon river in Saravan and Champassak province has been inked by the Ministry of Agriculture and Forestry’s Irrigation department alongside Zhejiang Construction Investment Group Company of China.
— Vientiane Times

Vietnam-funded facility for State Publishing Book Distribution House launched
An Office of the Central Committee of the Communist Party of Vietnam-funded upgrade of a warehouse and related facilities to accommodate the State Publishing and Book Distribution House was officially welcomed in the capital Tuesday.
— Vientiane Times

Government, UNICEF Review Child-oriented Efforts
The Government of Lao PDR represented by the Ministry of Planning and Investment, and UNICEF have met at a review meeting on the progress and achievements made in 2017 and child-oriented work plans.
— Lao News Agency

Tianjin Pledges to Grant Scholarships to Lao Students
Tianjin Seno-Germany University of Applied Sciences of China has pledged to grant about eight to ten vocational scholarships to Laos next year.
— Lao News Agency

No New Year Cards Need to Be Sent on Behalf of Central Leaders, PM’s Office
Head of Prime Minister’s Office Phet Phomphiphack has issued an announcement dated Dec 11, 2017 saying that neither greeting cards nor New Year cards should be sent on behalf of leaders at central committee, ministerial, organizational and provincial levels to fellow leaders.
— Lao News Agency