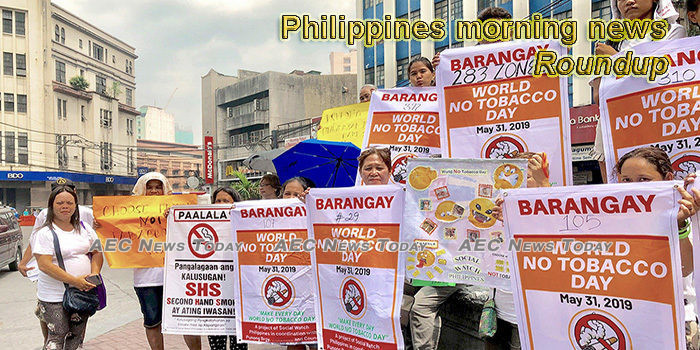 Duque: Testing capacity is PH’s ‘No. 1’ weakness in coronavirus fight
Health Secretary Francisco Duque III said on Tuesday, May 26, that the lack of testing facilities is the country’s number 1 weakness in the fight against COVID-19.
— Rappler

6 million families won’t get 2nd tranche aid – DSWD
The Department of Social Welfare and Development (DSWD) on Tuesday said only 12 million households from the original 18 million beneficiaries of the government’s social amelioration program (SAP) will receive cash aid for the month of May.
— Philippine Daily Inquirer

House leader opposes granting ABS-CBN another 25-year franchise
As far as Deputy Speaker Rodante Marcoleta is concerned, broadcast giant ABS-CBN should no longer be given another legislative franchise after it supposedly violated provisions in the Constitution and other related laws and even its own previous franchise.
— GMA Network

COVID-19 cases in Philippines climb to 14,669, deaths at 886
The number of confirmed coronavirus infections in the Philippines soared to 14,669 after the Department of Health reported a huge increase in the number of new cases Tuesday.
— Philippine Star

OFWs returning to Zamboanga must show health clearances, undergo quarantine
The Zamboanga City government stressed Tuesday that migrant workers and residents must observe health protocols, including a quarantine, when they arrive to make sure those in the city are protected from COVID-19.
— Philstar

Bacolod City’s dengue cases decrease by 68%
The number of dengue cases here dropped by 68 percent from 155 on January 1 to May 16, compared to 480 with one death in the same period last year, the City Health Office (CHO) said in a report released on Tuesday.
— Philippine News Agency

Some key ‘Build, Build, Build’ projects have resumed: Palace
Following the lifting of restrictions on major infrastructure projects, the government has already resumed some of the 100 big-ticket projects under its “Build, Build, Build” program, Malacañang said on Tuesday.
— Philippine News Agency

House panel OKs bills on P1.3-T stimulus package, aid for banks
The House Defeat COVID-19 committee approved two bills aimed at boosting the economy to cushion the effects of the pandemic, including a stimulus package worth around P1.3 trillion and providing aid for financial institutions.
— Rappler

COVID-19 adds to frustration of displaced families in battle-scarred Marawi
The emerald green pastures embracing her community betrayed the harsh realities of life there.
— CNA

Government eyes new taxes in 2021 to recover stimulus costs
New taxes are being considered by the Duterte administration starting 2021 to partially offset the costs of this year’s stimulus measures meant to counter the pandemic’s economic impact.
— Philippine Star

WHO reminds Pinoys: No rapid drop yet in virus cases; stay home
Even if restrictions on movement are eased in the coming days, the World Health Organization (WHO) advised Filipinos on Tuesday to still stay at home, especially as the Philippines has not seen coronavirus cases “rapidly decrease” in the nearly three-month implementation of strict quarantine measures.
— Philippine Daily Inquirer

Foreign arrivals down 54% in January to April
THE House of Representatives has raised the allocation for the tourism industry under its Philippine Economic Stimulus Act (Pesa), which is meant to assist economic sectors in recovering from the ill effects of the coronavirus disease (Covid-19).
— Business Mirror

PH healthcare workers who contracted COVID-19 now 2,420
A total of 2,420 health workers in the Philippines have tested positive for the novel coronavirus as of Monday, May 25, the Department of Health (DOH) reported on Tuesday, May 26.
— Rappler

More than 11,800 quarantined OFWs have so far returned home, says Palace
More than 11,800 overseas Filipino workers have been returned to their home provinces and cities after President Rodrigo Duterte’s directive to his officials to get them home immediately.
— Eagle News

Many kidney transplants stopped due to COVID-19 threat, says doctor
Many kidney care institutions have stopped transplant procedures due to the threat of posed by COVID-19, a doctor from the National Kidney and Transplant Institute (NKTI) said on Tuesday.
— GMA Network

Guevarra to order probe, immigration lookout for released Chinese operators of raided hospital
Justice Secretary Menardo Guevarra said Tuesday he will order an investigation and an immigration lookout for the two Chinese nationals arrested at an allegedly illegal hospital if reports are true that they were released by police without charges.
— GMA Network

Another shooting fatality in Bacolod City
A man was shot to death at Araneta Street in Barangay Sum-ag in this city Tuesday afternoon, May 26.
— Rappler

Philippines tries transport test run to prepare for commuter chaos
Police in the Philippine capital did a dry run on Tuesday (May 26) of measures to enforce social distancing on public transport and control the spread of coronavirus, a tricky task in a densely populated city known for its commuting chaos.
— CNA

CREATE bill to attract more investments, save and create jobs
The proposed Corporate Recovery and Tax Incentives for Enterprises Act (CREATE) will not put to waste incentives being extended to businesses unlike in the past, thus a win-win situation for both the businesses and the government.
— Philippine News Agency

Calida justifies NTC’s different treatment of ABS-CBN
Was it wrong for the National Telecommunications Commission or NTC to allow other broadcasters before to operate even with an expired franchise? Or is there something particularly different with ABS-CBN that it is exempted from that practice?
— Rappler

Duterte: About 1% of P30.82-B Bayanihan Grant to LGUs accounted for so far
Only about one percent of the financial aid given to local government units to boost their capabilities to respond to the coronavirus pandemic has been liquidated as of May 21, President Rodrigo Duterte said.
— Philippine Star

AFP names next Wescom chief
The Western Command (Wescom) will have a new chief.
— Eagle News

Ayala launches pandemic recovery program for 250,000 SMEs
The Ayala group , one of the largest and oldest conglomerates in the country, launched a program to help its 250,000 small and medium enterprises (SME) partners to recover from the economic impact of the coronavirus pandemic .
— Rappler

Duque vs. Duterte: Health chief says it’s safe to start classes in August
So, who are we following now? Health Secretary Francisco Duque said in a Senate hearing today that it’s safe to reopen schools in August, less than 24 hours after his boss, President Rodrigo Duterte, said he would not allow the resumption of classes until a COVID-19 vaccine becomes available.
— Coconuts Philippines

NEDA chief pushes for digital transformation under ‘new normal’
Digital transformation should be one of the structural reforms that the government should push for under the “new normal” amid the coronavirus disease 2019 (Covid-19) pandemic, acting Socioeconomic Planning Secretary Karl Kendrick Chua said Tuesday.
— Philippine News Agency

Health workers may work abroad once Covid-19 is addressed: Palace
President Rodrigo Duterte might lift the deployment ban on health care workers who opt to work overseas once the coronavirus disease 2019 (Covid-19) crisis ends in countries where they would go, Malacañang said on Tuesday.
— Philippine News Agency

Government begins payout for 2nd tranche of small business subsidy
THE government has finally started on Tuesday the payouts for the second tranche of Small Business Wage Subsidy (SBWS), a pushback from its original schedule of May 16 to 31.
— Business Mirror

Metro Manila mayors back shift to GCQ on June 1
The 17 mayors of the National Capital Region will formally recommend shifting to a General Community Quarantine from June 1.
— Philippine Star

995 adolescent girls give birth, pregnant in Zambo City in Q1 2020
995 pre-teen and teenage girls either gave birth or are still pregnant in Zamboanga City as reported in the first quarter of the year, prompting authorities and stakeholders to step up efforts and address the issue amidst the COVID-19 pandemic.
— Philippine Information Agency

PNP: Anti-drug operations ‘will be unrelenting as ever’ amid COVID-19 crisis
Anti-narcotics operations will continue even as the country deals with the COVID-19 pandemic and the police are in the lead of enforcing quarantine, the chief of the Philippine National Police said Tuesday.
— Philippine Star

House to allow committees to hold hearings even during break –Romualdez
All standing and special committees of the House of Representatives will be allowed to conduct meetings even during the sine die adjournment of Congress by the end of next week, according to Majority Leader Martin Romualdez.
— GMA Network

Crimes vs children in PH condemned
A CATHOLIC priest said the sins and crimes committed against children are crimes that cry out to heavens for justice.
— Tempo

Spike in customer calls send call centers hiring during lockdown
Demand for call center workers bucked a declining trend in job postings during the lockdown of Luzon as the industry sought to answer a surge in phone calls from customers stuck at home.
— Philippine Star

NBI tapped to probe profiteers
DISMAYED by the “greed” of some traders in the middle of the coronavirus pandemic, President Duterte has ordered the National Bureau of Investigation (NBI) to “study very carefully” allegations that a local supplier was selling overpriced medical equipment in the country.
— Tempo

Bacolod partially lifts liquor ban
Mayor Evelio Leonardia partially lifted the ban on the sale of liquor here and allowed the consumption of such, but only inside houses, starting Monday, May 25.
— Philippine News Agency

PH athletics national open to serve as Olympic qualifier
The Philippine Amateur Track and Field Association (PATAFA) is targetting a major competition restart in December 2020 as the annual national open will serve as a qualifier to the postponed Tokyo 2020 Olympics.
— Rappler