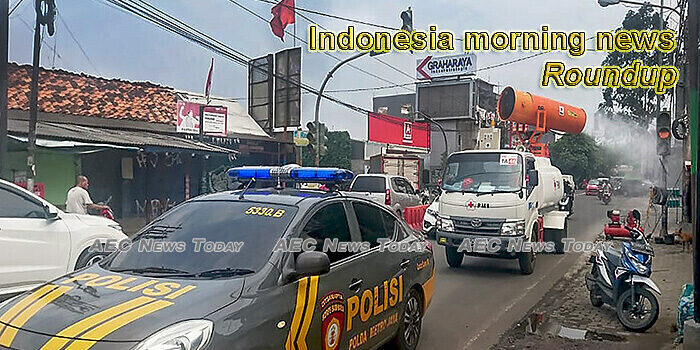 Indonesia’s Daily Coronavirus Cases Set Another Record
Confirmed cases of coronavirus infection in Indonesia hit a new high on Wednesday with 1,853 new cases to take the country’s total to 68,079, according to the National Covid-19 Task Force.
— Jakarta Globe

Corpse Snatching of Covid-19 Patients Still Haunt Indonesia
Dramatic footages of grieving families snatching the bodies of Covid-19 patients continued to appear on news broadcasts, painting a grim picture of the country’s struggle against the pandemic that so far has killed more than 3,300 people.
— Jakarta Globe

Indonesia Might Buy V-22s—The Reason Is China
The U.S. State Department on Monday cleared Indonesia to buy up to eight V-22 Osprey tiltrotor transports from Bell-Boeing for a cost of around $2 billion. That sum includes spare parts.
— Forbes

US Approves $2b Osprey Aircraft Sale to Indonesia
Indonesia could soon get eight MV-22 Block C Osprey and the aircraft equipment and weapon system worth $2 billion in total from the United States after the US State Department cleared the purchase.
— Jakarta Globe

Upcoming Bicycle Law to be Applicable Nationwide, Says Government
During a virtual discussion between the Indonesian Transportation Society (MIT) and the Ministry of Transportation on Tuesday evening, the ministry’s land transportation director-general Budi Setiyadi said that the upcoming bicycle regulation will be applicable nationwide.
— Tempo.co

Maria Lumowa, Fugitive in $200m Bank Fraud, Extradited to Indonesia after 17 Years
Maria Pauline Lumowa, a fugitive in a major embezzlement case involving more than $200 million in bank loans, was extradited by the Serbian government to Indonesia on Wednesday, 17 years after she was named suspect.
— Jakarta Globe

Investigation hints at cronyism in awarding of Indonesia lobster export permits
An investigative report has revealed the political links between Indonesia’s fisheries minister and a slew of companies recently awarded permits for a controversial lobster export program that experts say is unsustainable.
— Mongabay

Eleven Pct of Returning Migrant Workers in Greater Jakarta Placed under Quarantine
More than 42,000 Indonesian migrant workers have arrived in Greater Jakarta via Soekarno-Hatta Airport and Tanjung Priok Port as of Wednesday, with 11 percent of them being placed under quarantine for precaution during the coronavirus outbreak.
— Jakarta Globe

Indonesian Movie Theaters Prepare to Resume Business
After months of not operating due to Covid-19, Indonesia’s movie theaters will reopen on July 29.
— Tempo.co

Ancol Reclamation Criticized Over Environmental Impact Analysis
Urban planning observer from Trisakti University, Nirwono Joga, on Wednesday highlighted three important aspects contained in the Ancol reclamation plan, one of which he says is a spatial violation as it is not contained in the city’s spatial planning regulation.
— Tempo.co

Indonesia to benefit from diversification of global supply chain, DBS says
Indonesia will benefit from the diversification of the global supply chain as multinational companies are looking into ways to reduce reliance on China to manufacture their supplies following the outbreak of COVID-19, Southeast Asia’s largest bank DBS has said.
— The Jakarta Post

Lawmakers, businesses at loggerheads over regulation of anonymized data
Businesses that manage large quantities of the public’s data have asked the House of Representatives not to regulate anonymized data in the personal data protection bill, saying that it could hamper their business development.
— The Jakarta Post

AHY: Democratic Party Not Coalition, Yet Ready to Contribute
The Democratic Party chairman Agus Harimurti Yudhoyono or AHY asserted that his side was ready to contribute to the country’s progress despite not being in the circle of political parties backing the government.
— Tempo.co

MPR: Govt Yet to Decide Fate of RUU HIP
The People’s Consultative Assembly (MPR) touched on issues of the bill of Pancasila Ideology Guidelines or RUU HIP during a meeting with President Joko “Jokowi” Widodo at Bogor Palace on Wednesday, July 8.
— Tempo.co

KAI Predicted to Face Rp3.4tn Deficit until Year’s End
State-owned train operator PT KAI was forecasted to experience operating cash deficit of up to Rp3.4 trillion until the end of 2020.
— Tempo.co

MRT Jakarta Passengers Steadily Increasing Post-restriction
MRT Jakarta continues to record a daily increase in users’ traffic of up to 22,000 passengers since the office and economic activities were reintroduced.
— Tempo.co

Unhas organizes three-day massive rapid test for 1,652 lecturers
Some 1,652 lecturers from all faculties and study programs at the Hasanuddin University (Unhas), Makassar, South Sulawesi, embarked on a three-day rapid test, Wednesday, as part of the university’s preparations for the new academic year.
— Antara News

Ministry targets Padang-Sicincin toll section completion in Dec 2021
The Public Works and Public Housing Ministry has set a target for the Padang-Sicincin section of the Padang-Pekanbaru toll road to become operational in December 2021.
— Antara News