Cambodia Morning News For May 9 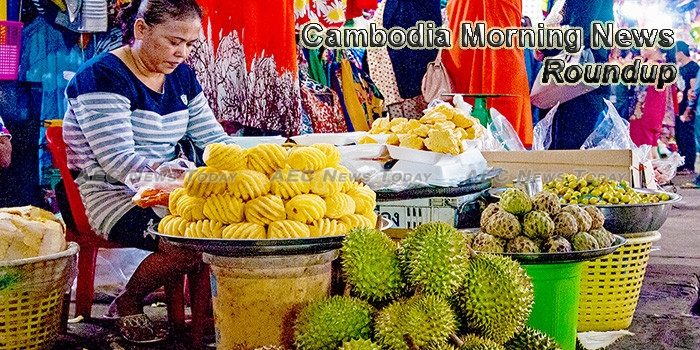 Surge in illegal log export from Cambodia, says report
Illegal exports of timber from Cambodia to Vietnam surged in recent months despite an export ban aimed at countering rapid deforestation in one South-East Asia’s poorest countries, an environmentalist group said in a report.
– The Star Online

Cambodia dismisses claims of illicit sand exports despite ban
The country’s Ministry of Mines and Energy banned sand exports in November 2016 after public outrage over large inconsistencies on the recorded amount of sand exported to Singapore, but an NGO said exports are still continuing.
– Eco-Business

Duterte goes to Cambodia, HK, China
President Duterte will be in Cambodia, Hong Kong and Beijing from May 10 to 15 to participate in international events that will discuss pressing economic issues in the region and possible developments with the country’s bilateral partners, an official of the Department of Foreign Affairs (DFA) said.
– Philippine Daily Inquirer

A BuzzFeed would-be is paving the way for startups in Cambodia
Did you know Cambodia has its own BuzzFeed? Well, now you do! (And, yes, do note that I’m assuming you know of Cambodia and where it is located in the world.)
– TechCrunch

Hun Sen’s brother seeks interior minister’s help in land dispute with cop
An increasingly public row over a plot of land in Banteay Meanchey has pitted one of the nation’s top drug cops against a brother of the prime minister, prompting a National Police investigation at the highest levels and raising, yet again, questions about nepotism and abuse of power in the Kingdom.
– The Phnom Penh Post

How to Invest in Cambodia: Asia’s Best Frontier Market
Cambodia is one of the fastest growing countries in the world. Unexplored and undervalued, international firms such as Starbucks, Samsung and Nike are just now to starting to invest in Cambodia.
– InvestAsian

Interior Ministry Displays ‘Historic’ Haul of Fake Cosmetics
Counterfeit cosmetics, including fakes of some of the world’s biggest brands, were put on display at the Interior Ministry on Monday as an official announced that nearly 70 tons of beauty products had been recovered in “historic busts” potentially worth millions of dollars.
– The Cambodia Daily (paywall)

Procurement: A Generous Sales Pitch
South Korea recently delivered 208 vehicles (mostly trucks but including cars, busses and ambulances) and 14 construction vehicles (bulldozers and the like) to Cambodia.
– Strategypage

Four mining licences put up for bids
The Ministry of Mines and Energy has publicly announced that companies can bid for four mining exploration permits in both Kratie and Kampot provinces, marking the first time since the ministry was formed in 2013 to issue fresh licences for private companies to investigate mineral resource potential.
– The Phnom Penh Post

US expresses concern for detained Cambodian rights workers
The United States has joined the European Union and U.N. human rights agencies in expressing concern over the extended pre-trial detention of five Cambodian human rights held for more than a year.
– NZherald/ AP

Court questions officials over sale of Jolie-Pitt land
An environmental ranger and a village chief were questioned yesterday by the Pailin Provincial Court for allegedly colluding to grab, clear and sell land in a protected area supported by the Maddox Jolie-Pitt Foundation, according to officials.
– The Phnom Penh Post

Breedlove Food Inc. provides humanitarian relief for Cambodia
As a shipping container left Breedlove Foods Inc. in Northeast Lubbock on the morning of May 5, Bill Miller, chief executive officer, said it was headed to a port in Houston where it would then make its way to Cambodia.
– Lubbock Avalanche-Journal