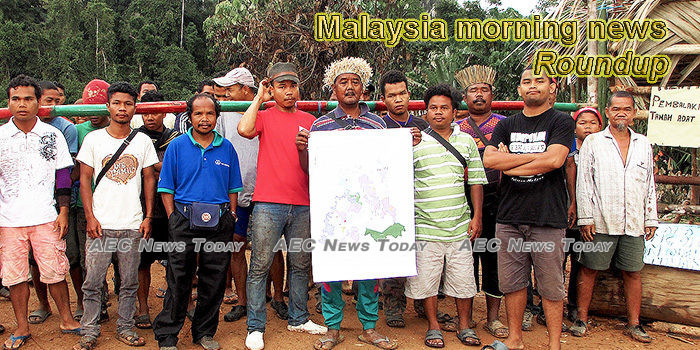 Malaysian workers ‘most dissatisfied’ with pay in Asia, new survey finds
Malaysian employees are the least satisfied with their wages among those polled in Asia, new findings have revealed. The survey by international recruiting agency Hays also found that one of the precipitating factors might.
— Malay Mail

Report: AirAsia board greenlit Fernandes’ multi-million sponsorship deal to boost brand’s image in 2010
A plan by AirAsia Group chief executive Tan Sri Tony Fernandes for the airline to sponsor a Formula 1 racing team to boost its brand globally was approved by the company’s directors back in 2010, reported The Star.
— Malay Mail

Plastic waste shame
Malaysia is among six countries that contribute 60% of an estimated eight million tonnes of plastic waste that enter the world’s oceans each year.
— The Sun Daily

ECRL not hit by Covid-19 as most workers stayed put during CNY break, says MRL CEO
Despite global panic and a slew of travel bans enforced in the wake of the Covid-19 outbreak, construction on the Malaysian-Chinese East Coast Rail Link (ECRL) joint venture here has been unaffected, said Malaysia Rail Link.
— Malay Mail

Queensland mulls inquest on MH370 after Abbott’s revelation on Putrajaya
The Australian state of Queensland said today it is looking into a potential inquest into the disappearance of Flight MH370.
— Malay Mail

From special loans to staycations, business associations on what Putrajaya can do to ease Covid-19’s economic impact
The head of a business association has proposed the government step in to help the sector reduce its operating costs in light of the Covid-19 outbreak.
— Malay Mail

Asking prices remain on downtrend, PropertyGuru index shows
PETALING JAYA: Developers and owners across the board are tempering their expectations as the industry adjusts to the closing of the Home Ownership Campaign (HOC) and a lack of strong catalysts this year, according to the PropertyGuru Malaysia Property Market Index (MPMI) Q1 2020 report. The overall MPMI for the country dropped 1.04 index points from 89.94 …
— The Sun Daily

Court of Appeal grants stay in S’wak govt’s lawsuit against Petronas
The Court of Appeal has granted Petronas a stay of proceedings in the Sarawak government’s suit to recover unpaid state sales tax from the national oil corporation.
— The Star Online

Apec meetings to discuss Covid-19 impact on member states
The Asia-Pacific Economic Cooperation (Apec) will have discussions on the Covid-19 outbreak in its upcoming meetings.Apec Communications and Public Affairs Director Michael Chapnick said Apec recognises the risk of Covid-19, which affects more than 20 countries around the globe.
— The Sun Daily

Covid-19: Waste management company increases protection measures of field staff
SWM Environment Sdn Bhd, an integrated waste management and public cleansing service provider in the southern region, is taking steps to improve the level of protection and personal hygiene of its field staff to prevent the spread of Covid-19 infection.
— The Sun Daily

Former PAIP manager charged with corruption, involving RM273,650 in gratification
A former production manager of Pengurusan Air Pahang Berhad (PAIP) was charged in the sessions court here today with 11 counts of corruption, involving gratification amounting RM273,650, in connection with the implementation of a post-flood project in 2014.
— The Sun Daily

Malakoff Q4 earnings rise 24.5% on disposal gain
Malakoff Corp Bhd posted a 24.5% increase in net profit for its fourth quarter ended Dec 31, 2019 to RM106.4 million, from RM85.5 million in the previous corresponding quarter, due to a one-off gain from the disposal of its investment in Malakoff Australia Pty Ltd (MAPL), which was completed on Dec 18 last year.
— The Sun Daily

IGP confirms arrest of four Selangor CID cops for RM3m extortion to cover up Cheras drug lab
Inspector-General of Police (IGP) Tan Sri Abdul Hamid Bador today confirmed the arrest of four police officers yesterday, after they allegedly extorted RM3 million as an inducement to cover up a drug processing laboratory in Cheras, Kuala Lumpur that has since been raided
— Malay Mail

Minister vents about panic buying of surgical masks and groceries in Singapore
A leaked audio recording – purportedly of a Singaporean cabinet minister commenting on Hong Kong chief executive Carrie Lam’s decision to wear a mask in a press conference – is gaining traction in social media.
— The Star Online

Penang bookshop takes to Facebook to seek public advice on handling an abusive customer
THEY say the customer is always right, but deep down inside we know that’s not always the case.
— The Sun Daily

Kit Siang urges previous govt to ‘speak up’ following Abbott’s MH370 claims
Lim Kit Siang wants the highest levels of the past administration who believed the MH370 tragedy was a murder-suicide plot to speak up.
— The Star Online

Smoking out an occupational hazard
The ‘No Smoking’ signs plastered on the walls of an office are conspicuous but nothing can stop a nicotine addict from lighting up even if it means having to do so in the storeroom or stairway.
— The Sun Daily

Four Selangor CID cops arrested after alleged extortion involving RM3m
Four policemen, including a senior officer, were arrested yesterday after they allegedly extorted RM3 million as an inducement to cover up a drug processing laboratory in Cheras, Kuala Lumpur that has since been raided.
— Malay Mail

Kenanga IB, Petronas ink MoU on scheme for oil & gas players keen on doing IPO
Kenanga Investment Bank Bhd and Petroliam Nasional Bhd (Petronas) have signed a memorandum of understanding (MoU) to collaborate in the implementation of the Petronas Lestari: Road to Bursa Programme for the oil & gas services and equipment (OGSE) sector.
— The Sun Daily

IOI Corp second-quarter earnings up 9%
IOI Corp Bhd’s net profit for the second quarter ended Dec 31 rose 9.2% to RM213.5 million, from RM195.5 million in the previous corresponding quarter due mainly to higher contribution from all segments.
— The Sun Daily