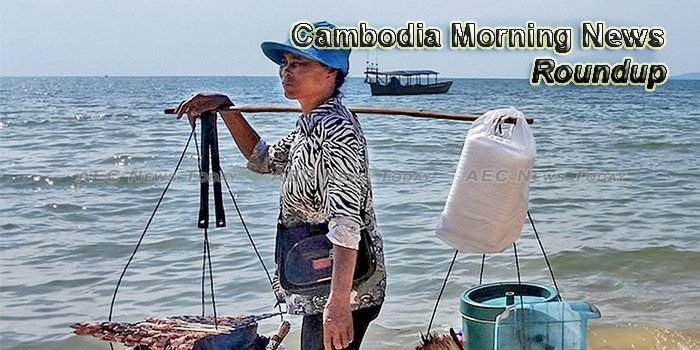 With continued growth, Cambodia’s finance sector aims for stability
The Kingdom’s financial sector continued to expand robustly during the first half of this year with outstanding loans and deposits increasing compared to the same period last year, reflecting sustainable development and growing public confidence in the sector, according to the latest report by the central bank. However, with enlarged growth the rate of non-performing loans has also increased.
— The Phnom Penh Post

Phnom Penh Set to Open First Airport Railway Link by April
A railway line that will transport passengers from the center of Phnom Penh to its airport is set to open in April, Transport Minister Sun Chanthol announced on Friday, adding that no evictions would be necessary to make way for the development.
— The Cambodia Daily (paywall)

Vietnam Imports Cambodian Timber Despite Ban
After tumbling in April, Cambodia’s timber exports to Vietnam leveled off in May, according to the latest Vietnamese customs data obtained by the U.S. NGO Forest Trends.
— The Cambodia Daily (paywall)

Business Insider: Spreading care with worker benefits
With the majority of garment and low-income workers ineligible for traditional financial services to purchase daily products like mobile phones and cooking stoves, iCare Benefits Cambodia hopes to fill in the gap by getting products to end consumers. With the Cambodian operations having recently been given a boost from a private equity fund, The Post’s Kali Kotoski sat down with Country Director Molika Meas to talk about the company’s expansion plans.
— The Phnom Penh Post

Deminer among three Cambodians arrested for arms sale
Banteay Meanchey police have arrested three men, including a deminer from the Cambodian Mine Action Centre (CMAC), for their alleged involvement in selling three mortars seized last week by Thai authorities, who, in a separate raid in Thailand near the country’s border with Myanmar, detained the alleged ringleader of the smuggling operation.
— The Phnom Penh Post

Laotian Man Arrested for Trafficking Nearly 5 kg of Crystal Meth
A three-month investigation by anti-drug officers led to the arrest of a Laotian man in Stung Treng province on Saturday for trafficking nearly 5 kg of crystal methamphetamine into Cambodia, an Interior Ministry official said.
— The Cambodia Daily (paywall)

NGOs Criticize Rule ‘Limiting’ Mobile Election Observer Numbers
Election-monitoring NGOs have raised concerns over changes to election rules that they fear could limit the number of mobile election observers that will be allowed to field.
— The Cambodia Daily (paywall)

The last days of Phnom Penh’s iconic White Building
Images of diverse lives lived well in one of Phnom Penh’s most iconic buildings, days before its demolition.
— BBC News