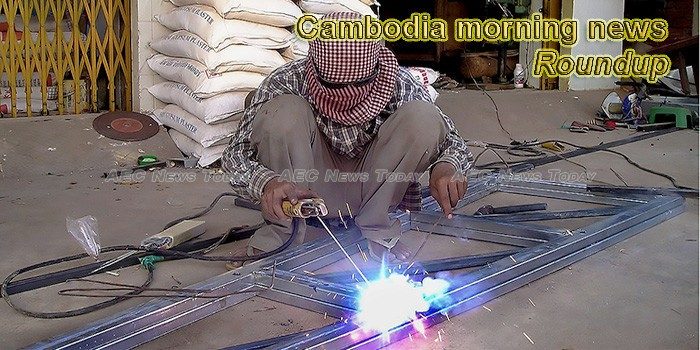 Hun Sen to file about 32 lawsuits against Rainsy
Prime Minister Hun Sen yesterday said his lawyers are preparing to file dozens of lawsuits against former opposition leader Sam Rainsy over his insults and will seek to seize his property as compensation.
— Khmer Times

PM Hun Sen Calls on Cambodian Tycoons to Invest on Agriculture (Video inside)
Cambodian Prime Minister Hun Sen appealed to Cambodian tycoons to invest on Cambodian agriculture, addressing at the annual meeting of Ministry of Agriculture Forestry and Fisheries on Thursday.
— Fresh News

Moon Jae-in’s visit: Good for Cambodia and good for Asean
The President of South Korea or the Republic of Korea (ROK), Moon Jae-in, is currently on a state visit to Cambodia which will end tomorrow.
— Khmer Times

Cambodia to Journalists: Let Us Now Praise Sihanoukville
Singapore. Las Vegas. Silicon Valley. These are the models the Cambodian government says it is hoping to emulate in the coastal port city of Sihanoukville, now awash in Chinese investment.
— VOA Cambodia

Report: Sihanoukville crimes increase 25%
Crimes in Preah Sihanouk province rose by 21 cases to 105 last year compared to 84 in 2017 – a 25% increase – said a report revealed at the closing ceremony of the annual achievement and goal setting by Preah Sihanouk provincial police on Wednesday.
— The Phnom Penh Post

PM Hun Sen to Visit Asia and Europe to Sell Khmer Products (Video inside)
Cambodian Prime Minister Hun Sen announced that he will travel to Asia and Europe to seek market for Khmer products, addressing at the annual meeting of Ministry of Agriculture Forestry and Fisheries on Thursday.
— Fresh News

Investing in Cambodia’s Adolescent Girls
Cambodia has a very high rate of labor migration to other countries, and a dramatically changing economic landscape
— Asia Foundation

Abortion Rates Highest in Kampot
The Ministry of Health said there were nearly 10,000 cases of abortion in 2018, with Kampot women having more abortions than other provinces.
— Cambodia News English

Opposition Only Criticizes, Never Commends: PM Hun Sen (Video inside)
Cambodian Prime Minister Hun Sen taunted the oppositions for putting blame on him when issues emerge, but never commended his leadership when the country progresses, addressing at the annual meeting of Ministry of Agriculture Forestry and Fisheries on Thursday.
— Fresh News

Government group to support local officials
The government has issued guidelines on the roles and duties of national-level officials who undertake municipal and provincial missions to promote the implementation of Prime Minister Hun Sen’s Rectangular Strategy for Growth, Employment, Equity and Efficiency Phase IV.
— The Phnom Penh Post

Editorial: Cambodia Always Seen Positively in RoK’s Foreign Policy
Since the Kingdom of Cambodia and the Republic of Korea (RoK) have established their diplomatic ties in 1997, Cambodia has always been seen positively in the RoK leaders’ foreign policy. Over the past 22 years, two RoK Presidents had paid their respective state visits to the Kingdom, while the current Korean President H.E. Moon Jae-in will begin his three-day state visit in Cambodia this afternoon, Mar. 14, 2019.
— Agence Kampuchea Presse

Kampot seaport to become ‘main gateway’ to region
With a quarter of construction work already completed, the new port in Kampot province will become the country’s main gateway to tourism destinations in the region, the minister of tourism said.
— Khmer Times

Koica and Ministry to sign RoD for startup support project
The Korea International Cooperation Agency (Koica) and the Ministry of Education today will sign a Record of Discussions (RoD) for a project to build a startup incubation centre and other initiatives to nurture the entrepreneurial spirit in students.
— Khmer Times

Xenophobia in Cambodia: Is It an Issue?
Cambodia has a long history. It has both a proud past and a tragic history. The country had its period of greatness during the ancient Khmer Empire, an empire which built the fabled temple Angkor Wat, one of the seven wonders of the world. Following the Angkorian era which began at the beginning of the 9th century and collapsed 600 years later, Cambodia found itself in one of the most tragic periods in its history.
— IPP Review

China and Cambodia kick off Golden Dragon Exercise
Chum Kiri district, Kampot province – Thousands of soldiers made up of Cambodian and Chinese troops yesterday descended upon a 10,000-hectare training area here to kick off the largest-ever joint military exercise between the two nations.
— Khmer Times

Boeung Kak activists stand trial for ‘intentional assault’
The Phnom Penh Municipal Court on Wednesday heard a case of intentional violence against four Boeung Kak community activists following an incident two years ago in which a woman, Sat Pha, alleges she was assaulted and had $300 and a mobile phone taken.
— The Phnom Penh Post

NGO urges people to respect monks
Buddhism for Development has urged the public not to look down on all monks just because of the actions of a few bad apples.
— Khmer Times