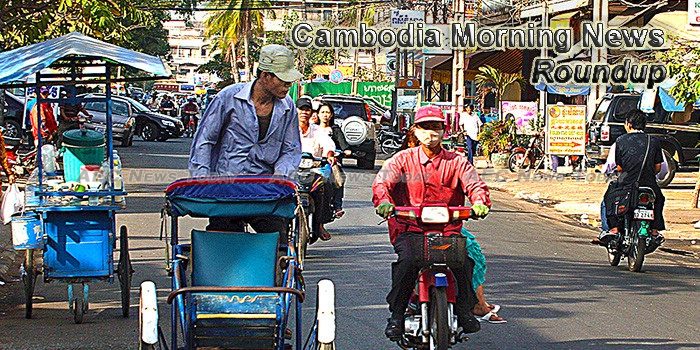 MEF holds agricultural workshop
The Ministry of Economy and Finance (MEF) organised a consultation workshop yesterday to gather information and comments from agriculture sector stakeholders to assist in the preparation of a 2018 national budget that would better support to the sector.
— The Phnom Penh Post

Cambodia to grow strongly with moderate inflation in short term: AMRO
Cambodia’s economic growth is expected to remain stable in 2017 and inflation will pick up due to increases in fuel and food prices, the Singapore-based ASEAN+3 Macroeconomic Research Office (AMRO) said in a press release on Tuesday.
— Xinhua

Police Request Over $500K to Reward Drug-Busting Officers
The National Police has requested more than $500,000 from the Interior Ministry to fund bonuses for police officers involved in confiscating illegal drugs, officials said on Tuesday.
— The Cambodia Daily (paywall)

AMRO forsees stable growth ahead
Cambodia’s economic growth is expected to remain stable this year with inflation rising slightly on increases in the costs of global fuel and food prices, the Asean+3 Macroeconomic Research Office (AMRO) concluded following its annual consultation visit to the Kingdom.
— The Phnom Penh Post

Phnom Penh closes down all unofficial border checkpoints with Thailand
The Cambodian has closed down all unofficial border checkpoints with Thailand in Banteay Meanchey and Battambang in an apparent reaction to the Thai government’s recent promulgation of a new alien workers’ law imposing stricter punishments on illegal migrant workers as well as their Thai employers, according to a report in The Phnom Penh Post Online on Tuesday.
— Thai PBS

Import and Export Procedures in Cambodia – Best Practices
In 2015, Cambodia exported US$16.1 billion worth of goods and imported US$15.3 billion. Cambodia’s top export destinations include the United States, the United Kingdom, Germany, Japan, and Vietnam.
— Asean Briefing

World Bank Appoints New Director for Region
The World Bank has appointed a new director for Cambodia, Burma and Laos, it said in a media statement on Tuesday.
— The Cambodia Daily (paywall)

Cambodia, Myanmar moot plan to promote ancient temples
Cambodia and Myanmar are discussing a plan to attract tourists to ancient temples in both nations.
— Bangkok Post

White Building Residents Say Move-Out Deadline Pushed
The few remaining families left inside Phnom Penh’s White Building have been given a reprieve after Land Management Ministry officials apparently extended a deadline for those holding out to leave their homes, according to a resident on Tuesday.
— The Cambodia Daily (paywall)

Make working in Thailand more accessible, dignified
Workers at the Migrant Resource Centre in Poipet count in “trucks”. Nine trucks yesterday. Fourteen trucks the day before. Today there will be seventeen trucks.
— The Phnom Penh Post

Looking for a job in Cambodia? Banks and hotels are hiring
Which industries offer the most opportunities for young Cambodians today? How do you think this will change over the years ahead?
— Southeast Asia Globe