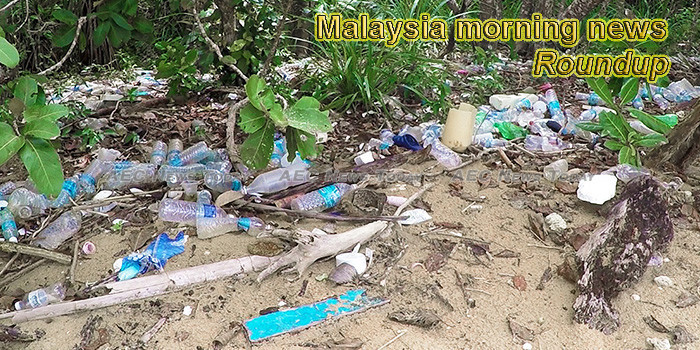 Malaysia’s May exports up 2.5%, lower than estimate
Malaysia’s exports grew at a faster pace of 2.5% year-on-year (yoy) to RM84.1 billion in May from 1.1% increase in April 2019, but was lower than market expectation of 3.5% to 4%.The expansion in exports was due to higher exports of palm oil and its related products.
— The Sun Daily

Delays in approvals to blame for loss of potential investments
Malaysian small and medium entrepreneurs (SMEs) are missing out on potential investments due to delays in approvals, said Entreprenuer Development Minister Datuk Seri Mohd Redzuan Yusof (pix).Speaking to reporters at the Malaysian Economic Summit 2019 today, he said the ministry was approached by Japanese banks.
— The Sun Daily

STB launches WeChat profile to attract Chinese millennials to visit Sarawak
Sarawak Tourism Board (STB) has launched its WeChat profile, to tap into the China market particularly to attract the millennials from the world’s most populous country to come and explore Sarawak. Assistant Minister of Tourism, Art and Culture Datuk Lee Kim Shin said STB is utilising WeChat, owned by Chinese.
— The Borneo Post

RAM: Malaysians have good credit profile, but financial literacy below average
About 69% of Malaysians have good or strong credit scores, an improvement over last year’s 65%, according to RAM Credit Information Sdn Bhd’s (RAMCI) 2019 Credit Score Profile.
— The Sun Daily

Prosecution applies to transfer Bung Moktar, Zizie Izette corruption case to High Court
The prosecution in the corruption case against Kinabatangan MP Datuk Seri Bung Moktar Radin and wife Datin Seri Zizie Izette has filed a notice of the motion to transfer it to the High Court.Deputy public prosecutor of the Malaysian Anti-Corruption Commission (MACC) Allan Suman Pillai will also apply for the two.
— The Sun Daily

Najib says bidding to skip court on July 16 to vote on constitutional change in Parliament
Former prime minister Datuk Seri Najib Razak said he will apply to be absent from an ongoing corruption trial next week in order to vote on a crucial Bill in Parliament, after the High Court refused to excuse him on Monday.
— Malay Mail

Govt mulls alternative care for underaged children of detained illegal immigrants
Putrajaya may introduce a pilot project that will provide better care for immigrant minors whose parents or guardians are locked up in detention centres, the home minister told Parliament today.
— Malay Mail

No signs of pick-up for Malaysian banking sector
Conditions for the local banking sector are expected to remain challenging in the next six months as there are no signs of pick-up, according to Hong Leong Investment Bank Research (HLIB Research). The research house sees a moderation in sector earnings growth to 2.6% in 2019 from 7.0% in 2018.
— The Sun Daily

We’re not responsible for villagers’ safety, says company after Simunjan plantation fracas
Tradewinds Plantation Berhad today said the authorities were partly to blame for the clash between its workers and villagers at its plantation in Simunjan on Tuesday. The company alleged in a press statement that one of its workers was assaulted by the people in the area and by hoodlums, who it claimed were brought.
— The Borneo Post

Family pays RM13K ‘ransom’ for return of man who fell for job scam
IPOH: The family of a 29-year-old man paid RM13,000 to secure his return after he was conned into taking a job in the Philippines.
— The Star Online

Safety first group aims to reduce accident rate to 30%
The pro road-safety group, Safety First, is targeting to reduce up to 30% the rate of road accidents especially involving motorcyclists, through the various initiatives it is organising.Safety First advisor Datuk Seri Azman Ujang (pix) said the group was now carrying out various awareness campaigns on road safety.
— The Sun Daily

Report: Bustari among four respondents to object govt’s bid to forfeit 1MDB-linked assets
Prominent Sarawakian businessman Tan Sri Bustari Yusuf is among four out of nine individuals and entities who have formally objected to the government’s forfeiture lawsuit against them to recover 1Malaysia Development Berhad (1MDB) monies when the matter came up in the High Court in Kuala Lumpur for the first.
— The Borneo Post

KLCI retraces losses as upbeat mood continues
The FBM KLCI erased most of the losses seen in the early morning session on the back of sustained positive sentiment in the market.
— The Star Online

We can only help genuine refugees, says UNHCR
Deputy representative for Malaysia says only those who are persecuted for nationality, race, religion, political opinion or social standing are eligible for a UNHCR card.
— FMT News

Two men suspected of cheating company of RM2.5 million
A businessman and an accountant, both aged 33, were remanded yesterday for three days, on suspicion of cheating a company of RM2.5 million in proceeds from the sale of shares.The company director had discovered that the proceeds had not been credited into the company’s account.
— The Sun Daily

Quick Take: Benelec rises 5.5% on assets disposal move
Shares of Benalec Holdings Bhd rose 5.5% this morning, after the group said it planned to dispose of two of its sand carrier vessels for RM15.8mil.
— The Star Online

All drivers involved in six-vehicle pile up receiving treatment in hospital
All six drivers who were involved in a six vehicle pile up around 6am this morning are currently receiving treatment in the hospital. According to the Fire and Rescue Department (Bomba), none of the victims were seriously hurt in the accident which took place at Kampung Lintang, Jalan Kuching – Serian.
— The Borneo Post

Sime Darby Plantation raises the bar on sustainability
Sime Darby Plantation Bhd (SDP) aims to achieve a sustainable supply chain with the publication of a new policy statement, “Working with Suppliers to Draw the Line on Deforestation”.The policy builds on the group’s existing practice and maps a step forward for the group to meet the “No Deforestation,
— The Sun Daily

Unimas to develop rapid rabies test kit
Sarawak wants to speed up human rabies tests as, at present, doctors have to send samples to the Institute for Medical Research in Kuala Lumpur for laboratory confirmation of the disease.
— FMT News

Seacera gets notice of demand for RM15.53m
Seacera Group Bhd has been served with a winding up statutory notice by Suong Sdn Bhd for a sum of RM15.53 million.This is in relation to the outstanding rental, goods and services tax and agreed liquidated damages pursuant to the breaches of the tenancy agreement dated August 4, 2016 for its factory in Selayang,
— The Sun Daily

Adults to blame for sexual assaults by children on children: Paediatric consultant
Exposure to pornographic material has been singled out as the main cause of sexual abuse among children, and adults – including parents – are mostly to blame, said senior consultant paediatrician Datuk Dr Amar Singh.
— The Sun Daily

Four respondents launch fight against Putrajaya’s bid to forfeit 1MDB-linked assets
Four out of nine individuals and entities formally objected to the government’s forfeiture lawsuit against them to recover 1Malaysia Development Berhad (1MDB) monies when the matter came up in the High Court for the first.
— Malay Mail

Ringgit unchanged against US dollar at opening
The ringgit opened flat on Thursday against the US dollar amid market concern on global economic growth as well as the fragile truce on US-Sino trade war, a dealer said.At 9am, the ringgit stood at 4.1350/1380 against the greenback from Wednesday’s close of 4.1350/1380.
— The Sun Daily

Malaysia morning news for May 30