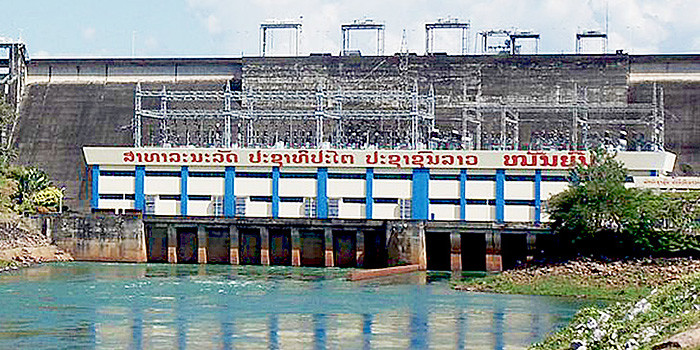 Construction of the Nam Ngum hydropower plant started in 1968. Harnessing the power of the country’s largest watershed, the first hydropower plant in the Lao People’s Democratic Republic was producing 30 megawatts of electricity within four years.

Today it sits at the base of a still growing hydropower cascade comprising four active power plants that produce a combined 1,350MW. Another 220MW plant is under construction, and five more are in the planning stage.

Part of the Lao’s ambition to be a ‘battery of Asean’, the plant is now known as Nam Ngum 1 and provides electricity to eight provinces and Vientiane, the nation’s growing capital. It also exports excess power to neighboring Thailand.

Making sure the Nam Ngum river basin can support all this power generation and its growing population, while still serving as an important tributary to the Mekong River, has been complicated and challenging.

In the late-1990s the government started searching for ways to balance the needs of the power plants, the people living in the basin, and the environment.

Over the past 14 years the Nam Ngum River Basin Development Sector Project, financed by the Asian Development Bank (ADB), supported this effort through the careful and coordinated gathering and sharing of watershed data, as well as strategies for changing the practices of local residents to build stronger livelihoods and minimize harm to the environment.

Daovieng Sounanthalath has worked at the Nam Ngum 1 plant for 23 years. He is now plant manager and heads its Electricity Production Unit. His main concerns are the efficiency of the turbines and the volume of the reservoir, which holds the plant’s power but also feeds a large network of irrigation systems and is the main water source for local villages and Vientiane.

The reservoir needs to hold enough water to keep the turbines spinning. But if too much water accumulates the reservoir may need to be partially drained, which can cause downstream flooding.

In recent years, reservoir management has been improving, says Sounanthalath. During the droughts of 2015 and 2016 the plant was able to release more water to contribute to efforts to boost the flow of the Mekong River. In 2011 Nam Ngum 1 was able to maintain steady production without significant draining, despite typhoons and an unusually heavy rainy season.

He says the improvement started in the mid-2000s when the government formed a committee to bring together all the ministries, local communities, private sector groups, and others involved in managing water resources in the watershed. That group grew into the formal Nam Ngum River Basin Committee Secretariat (NNRBCS) that now coordinates management of the water, land, and other resources in the basin.

“It is totally different to compare before and after,” says Sounanthalath. “Now no one blames each other when we have an issue. We just work to solve the problem together.”

Chanthanet Boualapha, director general of the Department of Water Resources in the Ministry of Natural Resources and Environment, says the second piece in the basin management puzzle was data and planning.

Once trust was built and all the different parties saw the value of communicating, they could begin to standardize and share water-related data. That helped the plants manage their reservoirs better, improve efficiency, and reduce wasteful and dangerous water release.

“When we go and talk about how to manage the basin—upstream or downstream—people speak in the same language now and they can see the basin perspective,” says Boualapha. “In the past we produced the plan and we put it on the shelf. Now we use the plan because it shows how much water is in the basin, how much is used by different areas, and how much is still available. So now we all know it pays to use and follow the plan.”

But ensuring the long-term health of the watershed goes beyond hydropower management and engineering.

The people of the Nam Ngum river basin have for centuries practiced a farming technique called slash-and-burn or shifting cultivation that is difficult, dangerous, inefficient, and damages the environment.

The process involves clearing and carving out plots of farmable land from thick forest. The land is farmed intensively for a few years and with limited use of modern techniques or fertilizer its productivity falls quickly. Farmers move on to repeat the process in a new plot.

The removal of trees and root systems reduces forest cover and degrades the watershed. It can result in landslides and flooding during frequent heavy rains, damaging villages, harming people, and making reservoir management more difficult.

Following a government ban on the practice in 2003, many villages in the watershed were in a bind. More than 65 per cent of the rural population was poor or food insecure, meaning they didn’t have sufficient food for several months each year. Many knew how to weave or care for livestock for personal consumption, but they lacked the funds needed to turn these skills into steady incomes.

As part of the Nam Ngum River Basin Development Sector Project the government created a Village Development Revolving Fund and technical agricultural training programs to bridge the gap. More than 40,000 households borrowed from the fund and the program has taken root in communities through the establishment of more than 15 formal credit and savings unions. Agriculture support services, such as training on seed selection, fertilizer use, and crop rotation, were delivered in more than 300 villages and training continues at 18 centers across the Nam Ngum river basin.

Oun Inthavong used her loan to create a weaving group. The women in Khonephouk Village had always weaved clothes for themselves and their families. With access to capital, each of the ten members of the group borrowed 5 million kip (US$615). Together, they bought supplies and equipment to scale up production.

In the past few years, the group has established its business in the village and now sells its products across the district and even as far away as Vientiane. The women have used their profits to upgrade from thatched homes to concrete houses; purchase food, appliances, and motorcycles; and pay school fees for their children.

“We have few skills and only primary level education, but we know weaving and there is demand for our products,” says Inthavong. “We are using this money to send our kids to school so they can get better jobs than us.”

Lavanh Seumsavath, manager of the Hinherb Savings and Credit Union, says the weaving group’s experience is not uncommon.

“In the past people only knew how to do agriculture for their personal use,” she says. “The project helped people understand how to buy and sell things, how to engage in business. This has created lots of new opportunities.”

Hinherb is one of eight districts declared free of shifting cultivation agriculture by 2014. Across the Nam Ngum river basin, the transformation of agricultural practices has enabled the reforestation of almost 14,000 hectares, (140 sq.km) of land.

In recent years, the Department of Water Resources has established offices in 18 provinces and 148 districts around the country. ADB and the governments of Australia and Spain have also supported the development of national guidelines on river basin planning and helped the National University of Laos (NUOL) start a bachelor’s degree program in integrated water resources management that now graduates about 30 students a year.

These are the people who will help share the Nam Ngum watershed experience as the government updates its Water and Water Resources Law and seeks to improve watershed management across the country. The new law will incorporate integrated water resources management principles, such as water quality standards, data collection and sharing arrangements, community consultation, and wetland management.

Boualapha says six watersheds in the country are now applying these principles systematically. His ministry wants to see ten more on the list in the next five years.

“We believe people are the core of everything,” he says. “If they know how to build a team everything can move ahead.”

This article was written by David Kruger, a principal communications specialist in ADB’s Department of External Relations, and Souphavanh Phonmany, an external relations coordinator in ADB’s Lao PDR Resident Mission. It first appeared on Asian Development Bank and is reproduced here with its permission.