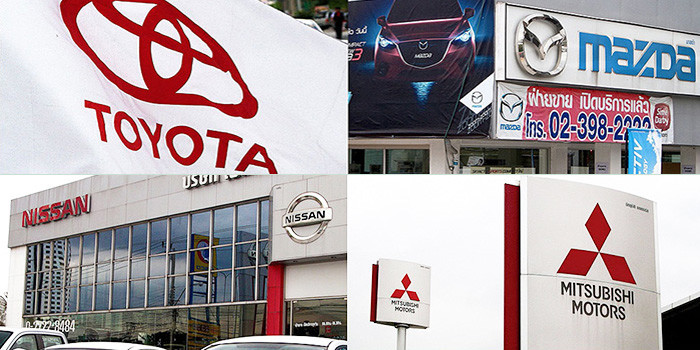 According to Focus2move’s Best Selling Cars Ranking for the first half of 2016 Toyota sold the most cars in the Philippines, Thailand, and Indonesia, while in Malaysia local manufacturers Perodua and Proton, along with Japanese rival Honda, saw it relegated to fourth place.

By total number of sales in H1 2016 Focus2move reports that Indonesia was Toyota’s largest market in Asean with sales for the period reaching 131,334 units, almost 20 per cent ahead of rival Japanese automobile maker Honda with 109,662 sales, and more than 33 per cent above third placed Daihatsu with 89,510 sales. Mitsubishi and Suzuki filled the fourth and fifth positions with with 50,996 sales, 49,683 sales respectively.

By marque Toyota topped the charts with 51.6 per cent of the market, followed by Honda at 20.6 per cent, Mitsubishi at 9.6 per cent, and Suzuki with 9.3 per cent. Of the top selling cars in Indonesia for the half year the Toyota Avanza topped the field with 67,224 sales, followed by the Toyota Innova with 29,488 ahead of Honda’s BR-V in third place with 29,347.

Depriving Toyota of number one and fourth place was Isuzu’s D-Max with 61,946 sales, and the Honda City with 14,887 sales respectively.

By marque Toyota claimed 36.1 per cent share of the market, followed by Mitsubishi with 16.2 per cent, Hyundai-Kia with 10. 2 per cent, Ford with 8.8 per cent, while Isuzu filled the top five with 7.1 per cent market share.

Using figures supplied by the Chamber of Automotive Manufacturers of the Philippines (Campi), Best Selling Cars Blog, reports that for H1 2016 four of the top five car models sold in the Philippines were branded Toyota. Heading the field was the Toyota Vios with 17,022 units, followed by the Fortuner with 11,561 sales, and the Hiace with 10,247 sales, followed by the Mitsubishi Mirage and Toyota Wigo to round out the top five.

In Malaysia though Toyota’s domination came to end with consumers throwing their support behind  local automobile manufacturer Perodua, who racked up 97,370 sales, more than 145 per cent ahead of Honda who narrowly edged out local manufacturer Proton for the number two spot with with 39,654 sales versus 35,727.
Experiencing a 29.8 per cent YoY slump in sales Toyota scraped into fourth place ahead of Nissan with 27,249 units versus 21,148.

At just 13 per cent, Toyota’s total market share in Malaysia is the worst in Asean’s four largest economies. Leading the Malaysia market by marque for H1 2016 was Perodua with a 35.3 per cent share of the market, followed by Honda with 14.4 per cent, and Proton 13 per cent. Renault-Nissan filled out the fifth place with 7.8 per cent market share.

According to WardsAuto Asean car sales in the first half of the year topped 1.467 million, equivalent to 3.2 per cent of the global total of 45.57 million units.

In Asean’s four largest economies the automotive and auto parts industries are major contributors to the local economy. In Thailand the automotive industry accounts for about 12 per cent of Thailand GDP and employs 550,000 people, while the Indonesia automotive industry is the second largest in the region with an annual production capacity of two million units. Malaysia is the third largest automobile manufacturer in Asean producing more than 600,000 cars annually.

In the Philippines the country’s 256 automotive and automotive parts manufacturers employ some 410,000 people and account for about 14 per cent of total Philippines industrial output, contributing about 5 per cent to Philippine GDP.

While not a major automobile manufacturing centre, the Comprehensive Automotive Resurgence Strategy (CARS) programme rolled out last year (See: Cars Rolled Out to Boost Philippines Automotive Sector) aims to breed new life into the Philippines automotive sector with expectations it will add 1.7 per cent to Philippine GDP and generate up to $6.5 billion in economic stimulus.