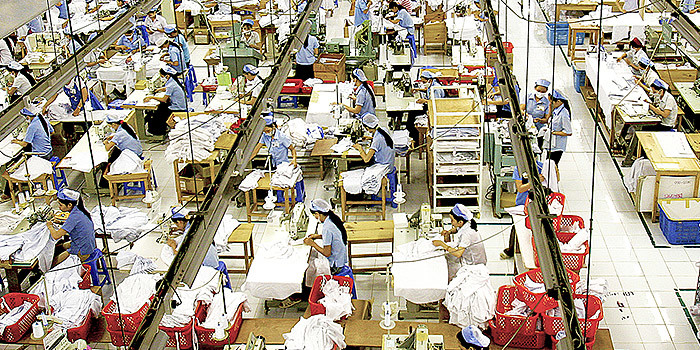 In just 25 years Vietnam has transformed from one of the world’s poorest countries to a lower middle income economy. This is primarily due to key structural reforms which were implemented in 1986 in areas such as reforming state-owned enterprises (SOEs), private sector development, financial reform, public expenditure management and trade liberalisation. The World Bank predicts that Vietnam could be at the same income level that Malaysia is today by 2035, if the government embraces a number of further structural and institutional reforms.

One area that would benefit from structural reform is the Vietnam textile and garment industry. The Vietnam textile and garment industry is Vietnam’s largest industrial employer with more than 2.5 million workers, constituting 25 per cent of the Vietnam labour force in the industrial sector and generating 17 per cent of Vietnam’s export revenue (US$27.2 billion in 2015).

The industry specialises in the lowest value-added segment in the middle of the global supply chain. Workers from rural areas are trained to specialise in cutting, trimming, and making garments, which accounts for 78 per cent of Vietnam textile and garment industry exports. Downstream sectors of the Vietnam textile and garment industry, such as marketing and distribution, are underdeveloped and rely heavily on foreign companies.

The Vietnam textile and garment industry

Out of nearly 6,000 companies currently in the Vietnam textile and garment industry, 2 per cent are SOEs, 15 per cent are foreign-invested companies and 83 per cent are private companies. Although small in number, SOEs have been the dominant producers and act as the gateway for foreign companies to tap into Vietnam’s low-cost labour force.

In 1995 a conglomerate of SOEs called the Vietnam National Textile and Garment Group (Vinatex) was formed to foster improved technology, modern management and diversified businesses, including investment and finance for the Vietnam textile and garment industry. But 20 years of SOE consolidation has not resulted in industrial upgrading; instead many SOEs are debt-ridden.

In response to mounting pressure to revitalise corrupt and inefficient SOEs, Vinatex had its first ever initial public offering selling 49 per cent of its shares in 2014. More than 120 joint-stock and joint-venture companies were created, with 51 per cent government ownership.

Vietnam is at a crossroads: it can either move to the next level of industrialisation or risk losing competitiveness. Foreign capital has long been welcomed in the Vietnam textile and garment industry and foreign-invested companies contribute about 60 per cent of Vietnam’s export revenue, but there are few linkages between domestic and foreign firms.

For example, Japanese firms have been sub-contracting their garment orders to the Vietnam textile and garment industry, but they have not created backward linkages by investing in yarn and fabric facilities.

When labour costs in Vietnam eventually increase, foreign investors in the Vietnam textile and garment industry will move to countries with lower labour costs, such as Bangladesh and Sri Lanka.

Vietnam is expected to be the major beneficiary of the Trans-Pacific Partnership Agreement (TPPA) . According to the World Bank the TPP will lift Vietnam GDP by 10 per cent by 2030. Much of this growth is predicted to come from Vietnam textile and garment industry exports to the United States and Japan.

Vietnam has a cost advantage in the labour-intensive garment segment and could exploit the preferential access to big markets granted by the TPP, but Vietnam will need to develop further by supporting industries which are complementary to existing ones.

In the case of the Vietnam textile and garment industry, creating forward linkages requires development of downstream sectors such as design, branding, marketing and distribution, including insurance and finance. Creating backward linkages means investment in upstream capital-intensive sectors such as petrochemical and other sectors that have high research and development costs. Upgrading will require new business models. So where should Vietnam start?

The TPP’s rules of origin require all products in a garment, beginning at the yarn stage, to be sourced in TPP member nations in order to enjoy preferential access to member nations. In anticipation of the TPP, Chinese, South Korean, Japanese and Taiwanese companies are investing in backward linkages in Vietnam (See: TPP Fears Spur FDI in Vietnam Textile And Garment Sector).

These capital intensive investments in the Vietnam textile and garment industry have a high fixed cost and reflect a longer-term commitment by foreign multinationals. To benefit from technological spill over and achieve higher productivity Vietnam needs to get two seemingly contradictory areas in the industry right.

The first is provision of public goods by the government. The lack of adequate infrastructure — such as roads, ports and electricity — makes it costly to develop backward and forward linkages, which hampers industrial upgrading.

Rectifying this will not only benefit the Vietnam textile and garment sector, but other areas of industry as well. Once linking different industries is less costly, Vietnamese entrepreneurs will invest in the necessary skills, technology and facilities to upgrade upstream and downstream industries.

The second is to foster the necessary entrepreneurship by privatising SOEs and reforming corporate governance. Managers in Vietnam’s SOEs lack commercial incentives and enjoy economic rents accruing from preferential access to land and capital. Rent seeking must be replaced. The government should move to incentivise efficient business operations.

To achieve inclusive and sustainable growth it is essential that competitive markets determine the allocation of land and capital to the private sector. Markets must also benefit small- and medium-sized enterprises (SMEs), which account for 97 per cent of all firms and employ nearly 75 per cent of the Vietnam labour force.

The government must develop a scheme to support SMEs in obtaining finance, facilitating joint ventures with foreign multinationals and utilising free trade agreements. These are areas traditionally dominated by SOEs and freeing them up for private firms will entail battling vested interests. But the reward will be a more innovative and inclusive Vietnam textile and garment industry, and a sustainable path for growth in Vietnam into the future.

This article was written by Tomoo Kikuchi, a senior research fellow at the Centre on Asia and Globalisation, Lee Kuan Yew School of Public Policy, National University of Singapore and Huong Vo, a MBA student at Vietnam National University Ho Chi Minh City, International University. It first appeared on East Asia Forum under a Creative Commons license and is reproduced here with its permission.