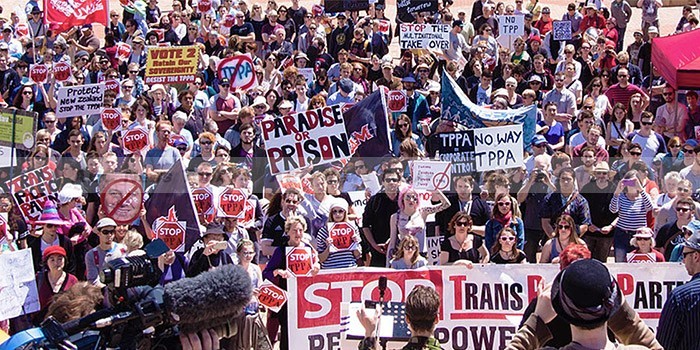 Ever since Jagdish Bhagwati coined the phrase ‘spaghetti bowl’ to describe the maze of overlapping preferential trade arrangements (PTAs), trade economists have been split over whether such deals are ‘building blocks’ or ‘stumbling blocks’ for the multilateral trading system.

PTA proponents point to the complementary of most favoured nation (MFN) and PTA tariff cutting during this recent period of profusion of PTAs as evidence of their ‘building blocks’ argument.

Multilateralists point to the welfare losses that accrue from trade diversion, the embedded trade discrimination against third parties that is woven into such agreements, as well as the damage inflicted over time to the multilateral system by the incremental downgrading of the MFN principle.

Both parties concede that large regional PTAs, such as the Trans-Pacific Partnership (TPP) agreement, the Trans-Atlantic Trade and Investment Partnership (TTIP) agreement and the Regional Comprehensive Economic Partnership (RCEP) agreement could serve as ‘building blocks’ so long as they remain broad-based, add new members, and impose liberalising disciplines on the multiple systems of rules of origin and related measures that discriminate between insiders and outsiders.

Judging by the setback at the recent TPP ministerial meeting in Maui in late July, the US-led negotiation appears to be failing this test.

Worse, the trade discrimination embedded within the existing TPP membership as a result of prior PTAs — the North American Free Trade Agreement (NAFTA) foremost — appears to ironically be the biggest ‘stumbling block’ to concluding the TPP negotiations.

Trade economists have long fretted about the lack of an explicit methodology and therefore a means of enforcement in the GATT/WTO rules, which are meant to discipline instances of discrimination suffered by third parties due to PTAs.

As a result, such agreements regularly violate, by way of their design of rules of origin and reallocation of tariff rate quotas (TRQs), the WTO’s Article XXIV injunction that their effects be no higher or more restrictive against third parties than the prevailing ‘duties and other regulations of commerce existing … prior to the formation of the free trade area’.

At Maui, this parallel universe of discriminatory measures against outsiders caught up with insiders too.

Negotiations to bring the end-game to a close were ‘gob-smacked’ by the resistance of NAFTA beneficiaries Canada and Mexico to pluralising and liberalising their hitherto restrictive — and privileged — access to the US auto-parts market in favour of Japanese auto supply chain participants.

Under NAFTA cars made in all three countries are sold duty free so long as 62.5 per cent of vehicle content originates within the PTA area. The bilateral deal between the US and Japan would have cut this figure to 55 per cent — a significant concession on the part of the Japanese (given their typically lower content rules in other PTAs), though balanced with changes to value content accounting rules and other exemptions favourable to Tokyo.

Canada and Mexico were not privy to the prior US–Japan exchanges and reacted with annoyance in Maui.

For the most part this auto sector content issue can be resolved within a pluralised discussion format involving the United States, Japan, Mexico and Canada — albeit with a less liberal regional value content rule. US industry is mostly if reluctantly on board; the Abe government appears willing to work issues through with the currently integrated structure of the North American supply chain; and Japanese auto companies are themselves unevenly impacted by the content origination rule.

A similarly pluralised discussion format involving a mix of offensive (New Zealand, Australia, US) and defensive (Japan, Canada, Mexico) interests could resolve the complexities in the dairy trade. In its recent Comprehensive Economic and Trade Agreement with the European Union, Canada for the first time granted additional dairy market access under a bilateral deal beyond its WTO commitments.

Commercially meaningful access provided by Ottawa (and Tokyo) to its TPP partners in select tariff lines that reaches well beyond simple in-quota tariff cuts and quota reallocation should broaden the overall market size and enable the more mercantile-minded parties in this sector to exchange market access concessions within.

But with over two-thirds of dairy farmers residing in vote-rich Ontario and Quebec, hard political bargaining on this front will have to await the completion of the Canadian elections on October 19 this year.

A far sterner test awaits on sugar. The US market is governed by convoluted rules that set foreign access quotas, allot overall annual supply, lay down de facto price floors, while operating as a ‘no cost’ (to government) subsidy scheme.

Within these parameters, NAFTA partner Mexico has uniquely had the right since 2008 to sell sugar to the US market without limit — although, with a view to shielding its privileged insider status it effectively agreed to a voluntary export restraint regime in 2014. Mexico will not cede further space on sugar to third parties in the US market.

No such sweetheart bilateral arrangement exists for Canberra. Australian sugar remains tied to its Uruguay Round TRQ allotment (which is barely a fifteenth of the volumes currently shipped by Mexico), with token additional access on offer in the TPP.

But Canberra is unwilling to have its sugar sector thrown under the bus yet again in a significant FTA negotiation and is willing and able to exercise veto points across chapters in the broader negotiations to extract payment in this regard.

If a bargain on sugar is to hence fructify and additionally catalyse the TPP endgame, Washington will have to reshuffle its domestic–foreign allotment limits to accommodate a non-trivial increase in Australia’s sugar quota.

Whether domestic producers, who account for just 1.3 per cent of total farm production by value but 40 per cent of crop industries’ lobbying expenditure will relent at a time of over-supply and tight margins will be worth watching closely.

In their Report to Leaders of October 2013 the TPP trade ministers had noted that their negotiators would ‘construct a single tariff schedule and have common rules of origin … that encourage cumulation [of originating inputs into production and processing from] across the region’.

That this has remained a dead letter in the case of sensitive products is due in considerable measure to US Trade Representative Michael Froman’s strategic miscalculation to treat a regional negotiation as a set of bilateral ones — to the point of almost unraveling the overall negotiation.

If the TPP is to be the comprehensive, next-generation ‘building block’ for 21st century trade liberalisation that it aspires to be and not the ‘stumbling block’ that NAFTA has become, Froman and his 11 partners should expend the necessary political capital to hew close to their own report of October 2013.

This article was written by Sourabh Gupta, a Senior Research Associate at Samuels International Associates, Inc. This article first appeared on East Asia Forum under a Creative Commons license and is reproduced here with its permission