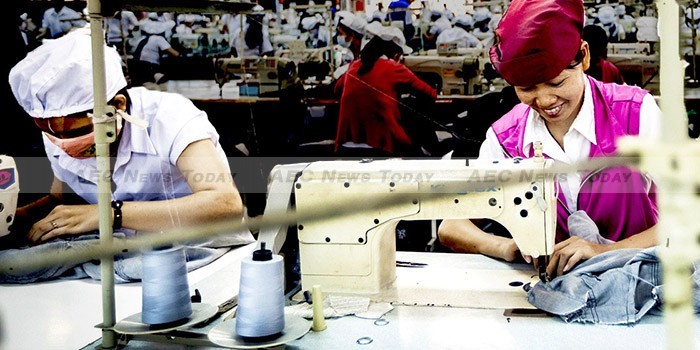 In anticipation that the drawn out negotiations for the Trans Pacific Partnership (TPP) might reach a conclusion in the not to distant future the Vietnam Textile and Apparel Association (Vitas) is calling for more investment in the burgeoning Vietnam textile and garment sector.

According to figures released by VITAS the quantity and value of cotton and fibre imports in the first five months of 2015 continue to outpace that for the same period last year, while exports of textiles and garments also enjoyed healthy growth.

However, the very trade pact that Vietnam sees as opening doors to increased exports could also see the rapidly growing Vietnam textile and garment sector penalised from day one.

Some $2 trillion worth of tariffs are set to be removed from the estimated $27.7 trillion in goods and services produced by those that are a party to the TPP. Estimates are that the TPP will boost the global economy by some $75 billion per year, with the US economy expected to receive a $24 billion boost.

At the same time a successful implementation of the TPP is expected to slash some $20 billion from China’s economy.

US Bias Drag Out TPP Talks

The drawn-out talks are a result of negotiators for the countries taking exception at many of the TPP clauses proposed by the US Trade Representative (USTR), who announced in 2008 that it intended to negotiate a broad investment and financial services agreement with Singapore, Chile, New Zealand, and Brunei Darussalam, who had signed the Trans-Pacific Strategic Economic Partnership Agreement (TPSEP), also called the P4 Agreement, in 2005.

Since then negotiations have progressed at a snails pace with individual countries objecting to terms demanded by the US, which many say are inequitable and provide one-sided concessions for US industry. Not surprisingly segments of US industry such as the motion picture, pharmaceutical, and agricultural sectors to name just three have spent billions of dollars lobbying to have their interests promoted in the deal.

Even today, more than five years since negotiations began the full contents and ramifications of the 26 different provisions said to comprise the TPP remain unknown, with the USTR refusing to make its contents publicly known, even to the US Congress.

The yarn forward rule is of particular concern to the Vietnam textile and garment sector, dictating that cotton must be sourced from fellow TPP members, or the tariff cuts promised under the scheme won’t apply. The world’s fourth largest textile exporter, up to 70 per cent of the material used by the Vietnam textile and garment sector originates in China, who is not part of the TPP bloc.

According to the Vietnam General Statistics Office (GSO) China remained the largest trade partner of Vietnam in the first six months of 2015, with trade revenue reaching about US$32.1 billion. In the same period China was the largest supplier of commodities to Vietnam, selling it about $24.4 billion worth of products, representing a 23.9 per cent YoY increase.

While US textile makers hope that the ’yarn forward’ provisions will see Vietnam purchase more US-grown cotton, the reality is that US fabric exporters would struggle to produce enough fabric to meet the growing demands of the Vietnam’s textile and garment sector.

The fear of sanctions has seen an increase in FDI projects aimed at reducing Vietnam’s dependence on China as a source of cotton.

According to the Vietnam Ministry of Industry and Trade (VMIT) 757 foreign direct investment (FDI) projects with a total registered capital of $3.839 billion were licensed in the first six months of 2015, with the total for new and additional FDI capital topping $5.49 billion.

While the total number of projects increased by 15.4 per cent YoY, the level of capital fell by 19.8 per cent over the same period in 2014. However, disbursed FDI increased by 9.6 per cent YoY to $6.3 billion

MITs statistics show that the manufacturing and processing industry accounted for 76.2 per cent of total new registered FDI capital, with the Vietnam textile and garment sector receiving some $1.12 billion.

The southern Vietnam province of Dong Nai saw the largest investment in the Vietnam textile and garment sector over the six months with Hyosung Istanbul Tekstil Ltd., a joint venture involving the giant South Korean Hyosung Group, receiving approval for a $660-million project producing and processing yarn at the Nhon Trach 5 Industrial Zone.

To date Hyosung Vietnam Co. has invested more than $995 million in the Vietnam textile and garment sector.

In the southern province of Binh Duong, Polytex Far Eastern Co. owned by Taiwan’s Far Eastern Group, received approval to proceed with a $274 million project on a 99ha (245 acre) site at Bau Bang Industrial Zone to produce supporting items for the apparel sector.

In addition, publicly traded Lu Thai Textile Co., one of China’s most prominent textile manufacturing, spinning, dyeing, and weaving groups invested US$60.8 million in a cotton and fibre factory.

Nguyen Ngoc Bach, head of the joint-stock Viet Thai Export Garment Company’s marketing department, said up to 70 per cent of garment material supplied to the Vietnam textile and garment sector came from China. Using Chinese materials could result in Vietnamese garment and textile products being in violation of the yarn forward rule of the TPP on where cotton originates.

“For this reason we are seeing explosive growth in both foreign and local investment in cotton factories. The amount of investment is quite staggering and I do not expect to see any reduction in the immediate future”, he said.

Although the USTR recently introduced a ‘short supply’ rule which allows raw materials “not commercially available in the United States or other TPP countries to be sourced from non-TPP countries and used in the production of apparel in the TPP region without losing duty preference”, it has also said its application “will be limited”. (See: Yarn Forward’s Effect on the Trans-Pacific Partnership and Vietnam)

In the meantime the clock keeps ticking down to AEC 2015.

The Race to a Risky Trans-Pacific Partnership Deal