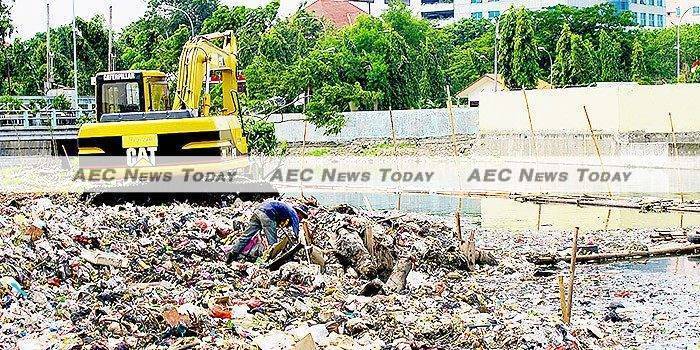 “During the last big floods in 2015, I couldn’t work for more than a week,” said Suwadi, who pushes his food cart through the neighborhoods of North Jakarta. “My house was flooded knee-deep, and the road to the market was worse. We could not do anything.”

Like Suwadi, many who live in Indonesia’s capital suffer the brunt of severe floods year in and year out. For 2013, estimated economic losses and damages exceeded US$572 million (Rp7.5 trillion), with the biggest losses suffered by retailers.

“Jakarta is a city prone to flooding,” said Bambang Surya Putra from the Jakarta Disaster Management Agency (BPBD). “Thirteen major rivers flow through the capital leading to the Java Sea,” he explained.

Land subsidence, where the ground settles gradually or sinks suddenly, continues in the city at increasingly alarming rates, mainly caused by intensive deep groundwater extraction. Certain areas of North Jakarta are seeing subsidence in the range of 15 – 25 cm (5.9 – 9.8 inches) a year. If sustained, these areas will sink four to five meters (13.12 – 16.40 ft) below sea level by 2025.

Adding to this potent mix is the rise in sea levels caused by climate change, and an increase in both the frequency and intensity of rainfall. In previous decades floods were relatively infrequent in Jakarta, but are expected to become more common – having severe socio-economic impact.

To manage floods Jakarta diverts water during peak flows; the water from upstream areas are diverted to the east and west of Jakarta via two major flood canals emptying into Jakarta Bay.

Over the years water flow has increased, while the canals have become increasingly clogged with garbage. These canals and floodways are poorly maintained, collecting a huge sediment build-up. Some waterways are operating at less than a third of their original capacity.

The World Bank is supporting the Jakarta government to mitigate flood risks by dredging a number of vital floodways and retention basins. The Jakarta Urgent Flood Management Project (JUFMP), also helps efforts to rehabilitate embankments and mechanical equipment that are part of Jakarta’s flood management system. After the dredging and lifting of sediment, some canals which were only 1 meter deep (3.28 ft) are now 4 meters (13.12 ft) deep.

“Dredging and strengthening embankments are very important because it will improve the capacity for water flow. This will reduce the risk of overtopping water, which could damage assets along the rivers,” said Iwan Gunawan, World Bank Senior disaster risk specialist.

Work to rehabilitate the Jakarta flood management system is shared with the Jakarta Government. The World Bank’s project includes work on 11 floodways or canals, with a total length of 67.5 kilometers (42 miles), and four retention basins covering an area of 65 hectares (160 acres). About 42 kilometers (26 miles) of embankments will be rehabilitated or constructed within these floodways and retention basins.

The project, currently in its second year of operation, is already having an impact. In 2007, there were 200 urban wards affected by flooding.  In 2015, the number was significantly reduced to 130, according data from the Jakarta Disaster Management Agency.

Local communities are benefiting from the results of this dredging and rehabilitation work, started in 2013.

“After the dredging, the water recedes faster after heavy rain,” said Eti, a mother whose two children fell ill during the big floods in 2015. “The river is also cleaner. Not much garbage floats around, so there is no longer a bad smell. My neighbors and I now enjoy hanging out along the river bank watching our children play.”

As the rainy season abates and work continues, many hope that these efforts will make Jakarta safer from flooding, albeit not completely immune.

“There will still be floods, but I think it won’t be as bad as last time,” said Suwadi.

At World Bank project sites every effort has been made to minimize the number of people affected. Land acquisition and resettlement plans have been prepared where resettlement is unavoidable, in consultation with the communities.

The World Bank’s strong partnership with the BPBD has also led to improved disaster risk mitigation efforts. Better coordination systems have been put in place to ensure that appropriate resources are always readily available. For example, during the rainy season, the city is deploying personnel in all its wards who can respond quickly to flood-related risks, such as unclogging street drains.

Agency official Surya Putra says that the allocation of responsive on-the-ground personnel complement the improvements in physical infrastructure – showing that the river dredging project has led to positive by-products.  Said Surya Putra proudly of the behavior change: “Before, we only respond after a disaster has happened. Now we are more proactive.”

This article first appeared on the World Bank website as Keeping Indonesia’s Capital Safer from Floods and is reproduced here with its kind permission.