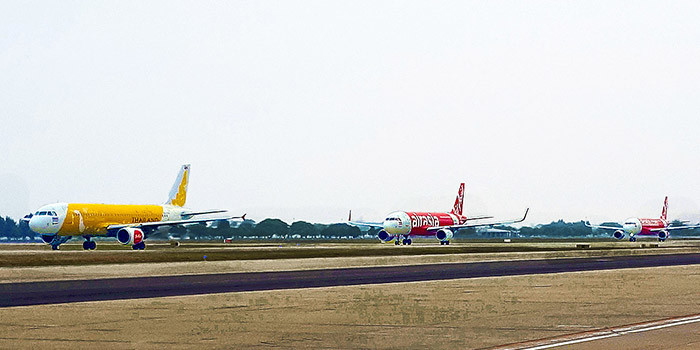 The Asean Community’s open skies policy and rising levels of disposable income are fertile fields for Asean airlines. While premium airlines will benefit gradually from rising levels of affluence in the region, it’s operators at the budget end of the market who are experiencing the fastest growth.

In recent years industry observers have watched with wonder at the number of aircraft being ordered by some of the regions low-cost carriers, not the least including those by Cebu Pacific, Lion Air, VietJet, and AirAsia to name just four.

With airline passenger numbers forecast to grow by 4.9 per cent or an additional 1.753 billion additional passenger journeys between now and 2034, huge returns are in the offering for those who get their timing right.

With such explosive growth it’s reasonable to ask, as Al Jazeera’s 101-East programme did on Jul 9: “How safe are Asia’s airlines”. Even more pertinent given the continued expansion in the Asean Community’s by low-cost carriers is: “Are these cheap carriers sacrificing safety, in the pursuit of passengers”.

Produced by Australian journalist Samantha Hawley How safe are Asia’s airlines focuses heavily on the Indonesian government investigation into the crash of AirAsia Flight QZ801, on December 28, 2014 while flying from Surabaya to Singapore, and weaknesses in the Indonesian aviation sector.

The report, released late last year, is described by Ms Hawley as “shocking and raises many questions’.

Paramount to the infractions by PT. Indonesia AirAsia, an associate of Malaysia’s AirAsia Berhad which owns a 49 per cent stake, is: What was the Indonesian aviation regulator doing at the time? The simple fact is the Indonesian regulator is not up to international standards”, Ms Hawley says.

Part of the answer is given by retired Air Marshal Chappy Hakim, former chief of the Indonesian Air Force and currently a senior advisor to the transport ministry. Between 2000 and 2010 passenger numbers in Indonesia increased by between 10 and 15 per cent per annum, he says. However, skilled labour such as pilots, engineers, and technicians failed to parallel the rise in demand.

Coupled with inadequate nation-wide infrastructure and knowledge that the Directorate General Of Civil Aviation (DGCA) “is not quite good at observing and close monitoring”,  Indonesia AirAsia “exploited weaknesses” that led to the crash of AirAsia Flight QZ801, Mr Hakim says.

That the aircraft rudder limiter had been logged as faulty at least a dozen times over the previous 12 months before the crash is not disputed. In fact, Indonesia AirAsia engineers are said to have shown pilots how to turn off the annoying alarm in the cabin. What they hadn’t shown pilots, and which is strictly forbidden while an aircraft is in flight, is to reset the Flight Augmentation Computer (Fac), which is exactly what Flight QZ801 Captain Iriyanto, who like many Indonesians uses only one name, did.

The result of this unauthorised procedure, along with Indonesia AirAsia pilots not being trained in high altitude upset training (Haut), we are told, was what saw all 155 passengers – 137 adults, 17 children and 1 infant – and seven crew plummeting for a horrifying three minutes into the Java Sea from 34,000ft at a speed of 195km/h (122mph), or 54m/s (177ft/s).

In How safe are Asia’s airlines Geoffrey Thomas, ceo of airlineratings.com paints a grim picture of Indonesia stating: “The fact that Indonesia fails every single Icao audit is a reflection of where they are… and it’s not a good picture. The average compliance with international standards by Indonesia is roughly 30 per cent”.

Ms Hawley then goes on to claim that “Indonesia failed the most recent Icao audit in 2014”. All quite alarming… if true.

To find the most “dangerous” country in Asean in which to fly one must travel considerably further north and west of Indonesia where, just as it has the Asean Community’s deadliest roads, the Thailand aviation sector is Asean’s most poorly compliant.

With an average compliance rate of just 31.03 per cent in its 2015 Icao audit, the Thailand aviation sector ranks well below the global average of 64.74 per cent.

Icao also notes a ‘significant safety concern (SSC)’ indicating that the Thailand Government is ‘not providing sufficient safety oversight to ensure the effective implementation of applicable Icao standards. Other countries whose aviation sectors are currently flagged with a SSC include Angola, Eritrea, Haiti, and Malawi.

Neighbouring Cambodia has the second lowest level of compliance at 44.56 per cent, performing particularly poorly in the fields of organisation, accident investigation and air navigation services, but above the global average for legislation.

At 58.36 per cent, according to a 2011 Icao audit, the Vietnam aviation sector also falls below the global average due to weaknesses in its air navigation services, aerodromes, and organisation.

While How safe are Asia’s airlines focuses heavily on AirAsia, the Malaysian-based low-cost carrier doesn’t operate the largest fleet in the Asean Community. It’s 82 aircraft are well below the 111  operated by Indonesia AirAsia rival, Lion Air.

If the entire AirAsia Asean group – Thai AirAsia (48), Indonesia AirAsia (22), and Philippine Air Asia (13) – is counted as a whole, of which AirAsia Berhad owns varying amounts of equity, the fleet comes in at 165, dwarfed by the Lion Air group’s (Batik Air and Wings Air) fleet of 223.

While failing to meet international standards is a cause for concern, the primary worry of most air travellers is whether the are likely to die in the process of getting from one place to another. . And from that aspect the news is reasonably good.

Despite the poor levels of compliance and the thousands of take-off and landings a day, the Asean Community is incredibly safe in which to fly, if fatal crashes are the yardstick you measure such things by.

Attempts to contact 101-East proved problematic. The programme posts no contact methods on its web page. When eventually reached and asked whether it thought How safe are Asia’s airlines accurately reflected the Asean aviation sector, or much wider Asian aviation sector, Al Jazeera’s 101-East refused to comment.

In an unsigned reply someone using the programmes corporate email replied: ‘How Safe Are Asia’s Airlines was an acquisition bought by Al Jazeera. It was originally produced by ABC Television Australia as False Economy”.

‘It used the latest published report at the time and it was clearly sourced. The film also clearly identified which airline was being referred to when discussing Air Asia and Air Asia Indonesia’ (sic).

The ABC Australia programme purchased by Al Jazeera was broadcast on May 3 under the title False Economy and was based on the large number of Australians who visit the Indonesian island of Bali each year. In its original form it never purported to be a report on the Asean aviation sector, or the Asian aviation sector.

However, information provided by Icao communications chief Anthony Philbin shows that the 2016 Icao USOAP audit was published in May 2016. After the production work on False Economy would have been completed, but some two months prior to the original programme having been re-edited, packaged, and sold for broadcast by Al Jazeera English’s 101-East programme.

While the original False Economy story by Ms Hawley was based on the latest Icao USOAP audit at the time, the repackaged and sensationally titled How Safe Are Asia’s Airlines was not, amounting to little more than yellow journalism – an industry term used to describe journalism that is based upon sensationalism and crude exaggeration.

If the latest Icao USOAP audit for Indonesia had been referred to in How Safe Are Asia’s Airlines parts of the original programme would have needed to have been either deleted, or re-shot, significantly reducing the profit Ms Hawley or  ABC Television Australia realised from the sale.

Despite more than two months having transpired since the original programme’s broadcast the response from Indonesia AirAsia that was excluded from the original report was also not included in How Safe Are Asia’s Airlines.

Both the original report and the more sensationally titled How Safe Are Asia’s Airlines conclude with an overlay stating: ‘AirAsia says its Indonesian Airlines will begin the Iosa safety audit next year’.

Both also note that AirAsia declined to be interviewed for the programme, displaying a URL to an ABC Australia hosted webpage where AirAsia’s responses are purportedly displayed. Neither the 101-East or ABC Foreign Correspondent web sites contain active links to the document.

Of the recurring rudder fault the replies state: ‘Fault messages relating to the rudder limiter were cleared on each occasion, following satisfactory ECAM or BITE test, in accordance with the Directorate General of Civil Aviation (DGCA) approved company maintenance manual and Airbus maintenance manual and TSM (trouble shooting manual)’.

So, how safe are Asia’s airlines? We don’t know. But from our look at the Asean aviation sector things look pretty good overall. If the frequency of fatal commercial aviation crashes is the yard-stick by which such things are measured, flying in Asean is infinitely safer than taking the bus, and often times not that much more expensive.

Update: This story was updated at 12.06am on July 23, 2016: This article was updated to reflect additional information provided by Icao regarding the timing of the 2016 USOAP audit for Indonesia.