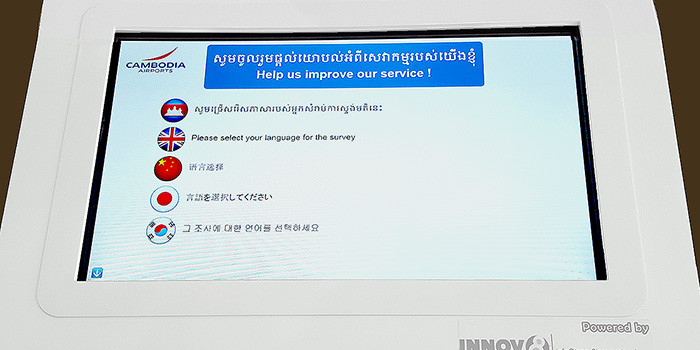 In a bid to boost the quality of goods and services people receive at recreational venues across the country Cambodia’s Ministry of Tourism has introduced a new ranking standards system.

According to a statement issued by the ministry, restaurants that pass inspection will be awarded between one- and five-stars, while venues such as night clubs, karaoke parlours, and beer gardens will vie for a grade of up to three ‘orchids’ on a ministry-issued certificate. Event venues that pass their inspection will be eligible to receive a government-issued certificate of acknowledgment.

Cambodia Tourism Minister Thong Khon said the new ranking standards were devised “to improve quality as well as to strengthen human resources and skills”. The goal, he said, was to create a ‘One Service, One Standard’ framework to ensure minimum standards across the Cambodia tourism industry.

“The department will go evaluate those places — for example, which have better toilets, restaurant service, etc., — so they can receive the scores,” he said, adding that provincial tourism officials would conduct the assessments outside of Phnom Penh. Venues that do not meet basic criteria would not receive the nod of approval from the government, negatively affecting their business, he added.

Cambodia’s tourism sector is currently riding on a high. In June the Bucharest-based European Council on Tourism and Trade (ECTT) bestowed the title of World’s Best Tourism Destination for 2016 on Cambodia due to its rich cultural and historical legacy and outstanding natural beauty, as well as its safety record.

Mr Thong told The Phnom Penh Post that international acclaim was good for business, noting that countries that had previously won ECTT’s annual tourism awards had gone on to experience significant increases in inbound European tourists.

“Cambodian tourism will help develop the country. More European tourists will visit Cambodia, which pushes socio-economic development in a sustainable manner”, he claimed.

The ECTT award came on top of travel planning website TripAdvisor in March ranking Siem Reap, the gateway to Angkor Wat, as the top destination in Asia and the fifth best travel destination worldwide in its annual Traveller’s Choice Destination awards. In 2015 Cambodia was awarded the title of “Best Culture & Heritage Tour Destination” among 36 countries participating in the annual World Travel Fairs (WTF) awards, while Angkor Wat was awarded the title of Asia’s Leading Tourist Attraction.

The stream of back-to-back awards has helped raise the reputation of the Cambodia tourism sector internationally, with figures for the first half of 2016 seeing a significant boost. In July Cambodia Airports (CA), operator of the country’s three international aviation gateways, reported a 5 per cent year-on-year (YoY) increase in inbound Cambodia visitor arrivals by air in the first half of the year.

According to CA some 3.4 million international visitors flew into the country in the first six months of 2016 with Phnom Penh International Airport (PPIA) experiencing the largest increase of 10 per cent YoY growth (See: Cambodia Visitor Numbers up in First Six Months).

The introduction of a daily service between Tokyo and Phnom Penh by Japan’s All Nippon Airways (ANA) last month (See: High Hopes as ANA Begins Direct Tokyo-Phnom Penh Flights) along with the opening of the first Japanese hospital in Phnom Penh (See: Sunrise Japan Hospital Boosts Cambodia Healthcare Sector) are also expected to see increasing numbers of Japanese visitors. There are currently some 2,500 Japanese citizens registered with the Japanese embassy in Phnom Penh, while Japanese foreign investment has seen the number of  Japanese restaurants grow to about 150.

The government of Prime Minister Hun Sen has made it clear it would like to see more Japanese investment. In the first half of 2016 Japanese investment came in at $258 million, a 10 times increase on the same period in 2015 ($25.53 million), but below that from China and South Korea (See: Asean H1 2016 FDI Winners & Losers).

Improving food safety and hygiene will instill additional confidence in Japanese and other travellers and is a key stepping stone toward attracting more Japanese investment, and is indicative of a maturing Cambodia tourism sector.

Ranked 105 out of 144 countries in the World Economic Forum’s Travel & Tourism Competitiveness Report 2015, largely due to poor hygiene and tourism infrastructure, the new standard assessment programme is aimed at remedying these shortfalls..0

Ho Vandy, chairman of the Cambodia Association of Travel Agencies (CATA), said that once the new rankings come into play and are enforced the benefits will flow through all of society.“This will generate more income and everyone can gain from that. “If your business has quality, it will have a long life”, he told The Cambodia Daily.