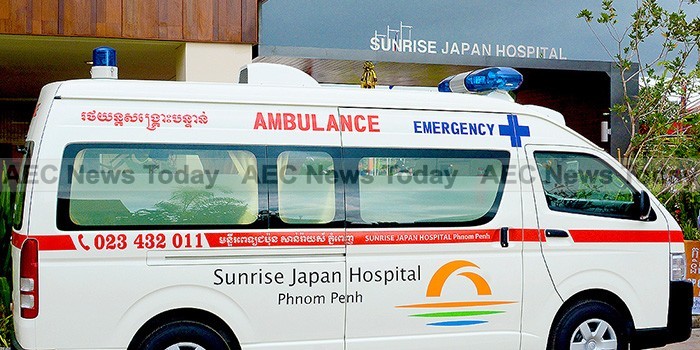 Cambodia’s under-resourced healthcare sector will shortly receive a much needed boost with the opening in Phnom Penh of the first Japanese owned, staffed, and managed hospital.

Officially due to commence operation on October 17, Cambodia Prime Minister Hun Sen officially declared the US$35 million Sunrise Japan Hospital open on September 20 in the presence of a special envoy from the Japanese government.

Only the second 100 per cent foreign owned hospital in Phnom Penh, the 50 bed, 4,788 sqm (51,537 sqft) Sunrise Japan Hospital will be operated by JGC Corporation (formerly Japan Gasoline Co.), operator of operator of Tokyo Metropolitan Matsuzawa Hospital, in a joint venture with Kitahara Medical Strategies International, who operates a specialised neurosurgery hospital in Hachioji, Tokyo, in addition to the Kitahara Neurosurgical Institute, Phnom Penh, and the Kithara Japan Clinic, also in Phnom Penh.

To be staffed by 25 Japan medical board certified doctors and specialists and boasting some of the most technologically advanced equipment in Cambodia, Sunrise Japan Hospital will offer a critical care and emergency center, general internal medicine, general surgery, gastroenterology, cardiology, neurosurgery, neuroendovascular therapy, neurology, physical medicine and rehabilitation, and a health examination center.

Sunrise Japan Hospital will also be the first international-standard hospital in Phnom Penh to operate a full stroke prevention, treatment, and rehabilitation clinic .

In neighboring Singapore stroke is rising in prevalence. According to a 2014 Stroke Registry Report from the National Registry of Diseases Office (NRDO), Singapore public hospitals treated more than 7,800 people for stroke in 2014.

The stroke most typically experienced by people is ischemic stroke where the brain is deprived of oxygen when diseased or damaged cerebral arteries become blocked by the formation of a blood clot within the brain. According to the American Heart Association someone in the United States has a stroke every 40 seconds, while it says one person dies from stroke there every four minutes.

Highlighting the long-standing relationship between Japan and Cambodia, Prime Minister Hun Sen noted that his artificial eye, which replaces the left eye he lost during the 1975 battle for Phnom Penh, had come from Japan almost 20 years ago.

Acknowledging Japan’s foreign investment role in Cambodia – Japan is Cambodia’s third largest foreign investor behind China and South Korea – Mr Hun said “having a high standard hospital such as Sunrise Japan Hospital in Phnom Penh will not only benefit Cambodian citizens, but will also have a big influence on investors, tourists and others”.

Noting that travel between the two countries was now also much more convenient following the commencement of direct flights between Tokyo and Phnom Penh last month (See: High Hopes as ANA Begins Direct Tokyo-Phnom Penh Flights), Prime Minister Hun said he hopes to avail himself of the new service soon to travel back to Japan to get a new eye, as his current one was obtained in 1997 and “a bit worn”.

Mr Hun also said that he hoped that Khmer medical students and doctor’s wanting to specialise in the areas being focused on by Sunrise Japan Hospital will be given a chance at gaining internships and study programmes there, something hospital administrators have said is there goal.

While Cambodia’s resident population of some 2,500 Japanese citizens is a major focus of Sunrise Japan Hospital, it’s far from exclusively so. In addition to Japanese doctors and nurses some 60 Khmer doctors and nurses who have all undergone six months training in Japan are also employed there, ensuring Khmer and English-speaking patients will also feel comfortable using the facility.

Kiyoshi Odawara, Japan parliamentary vice-minister for foreign affairs said the idea of the Sunrise Japan Hospital was initiated during the 2013 visit to Cambodia by Japanese Prime Minister Shinzō Abe. “Health is one of the major sectors that Japan has focused on in Cambodia, and the Sunrise Japan Hospital will strengthen relations between the two countries and their people”, he said.

Shigemi Kitahara, founder and adviser to Sunrise Japan Hospital, said the opening was the culmination of an idea he first had in 2008 to build a hospital in Cambodia providing high quality and equal medical services.

In a telephone interview with AEC News Today, Cambodian physician Dr Mengly Jandy Quach, a past outspoken critic of the Cambodian healthcare sector and founder, chairman, and CEO of Mengly J. Quach Education, welcomed the opening of Sunrise Japan Hospital.

“The presence of a Japanese standard hospital will contribute a lot to Cambodia as it will help reduce the number of  Cambodians travelling to and staying in neighbouring countries such as Singapore, Thailand, and Vietnam for medical treatment”.

According to JGC Corporation some 21,000 Cambodians annually seek treatment in other countries in the region.

Dr Mengly said the establishment of a dedicated neurosurgical department focusing on stroke in Phnom Penh will also give the Cambodia healthcare sector a significant boost, and help boost standards.

“The risk and incidence of stroke is greatly misunderstood. About 15 million people suffer stroke worldwide each year. About five million of these die and another five million are left permanently disabled. As populations age the incidence of stroke will continue to increase. Sunrise Japan Hospital will therefore bring a much needed set of medical skills to Cambodia”, he said.