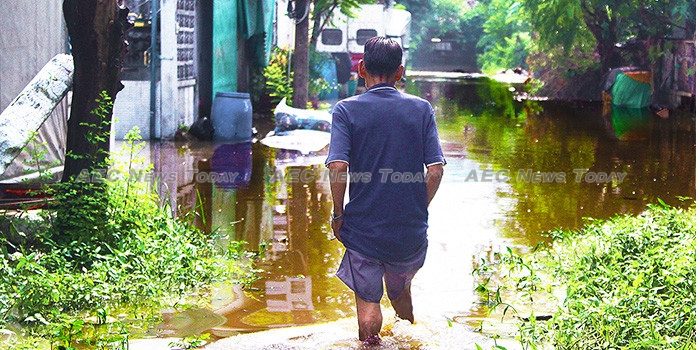 A recent report by the Potsdam Institute for Climate Impact Research (PIK) and the Asian Development Bank (ADB) forecasts devastating consequences to countries in Asia and the Pacific if climate change goes unabated.

The report finds that should the forecast 6C (about 11F) rise in temperature by 2100 occur under a ‘business-as-usual’ approach, countries in the Asia-Pacific region will experience dramatic changes to their agriculture and fisheries sectors, land and marine biodiversity, domestic and regional security, trade, urban development, migration, and health.

In a worse case scenario the report warns that drastic changes in the region’s weather system may even pose an existential threat to some countries in the region and crush any hope of achieving sustainable and inclusive development.

The report, ‘A Region at Risk: The Human Dimensions of Climate Change in Asia and the Pacific’, found that the rising mean global  temperature is expected to see the region subject to increasing numbers of typhoons and tropical cyclones, while annual rainfall is expected to increase by up to 50 per cent over most land areas in the region.

Coastal and low-lying areas in the region will experience increased risk of flooding, while direct housing damage from tropical cyclones is expected to increase by up to 58 per cent in the Philippines alone; which the report highlights has seven out of the top 25 cities globally most at risk from a one-meter (3.3ft) sea-level rise.

The report points out that a further 12 of the 25 cities globally most at risk from a one-meter (3.3ft) sea-level rise are in Asean, with three of the top 20 cities globally with the largest growth in annual flood losses between 2005-2050 also in Asean – Ho Chi Minh City, Viet Nam, Jakarta, Indonesia, and Bangkok, Thailand. (See: Preferring to Neither Sink or Swim Jokowi Pulls the Plug on Jakarta: Asean’s Sinking Cities).

Noting that the number of record-breaking rainfall events has already increased significantly over past decades, the report warns that if the global temperature continues to rise the frequency and intensity of heavy rainfall events causing more severe flooding is also likely to increase.

In Asean the highest relative share of population and percentage of economy exposed to floods is found in Cambodia and Vietnam, with the latter’s urban areas the only Asean country among the top ten countries globally to be most impacted by a one-meter sea level rise.

The distinction for the most number of people affected though goes to Indonesia. Some 5.9 million people living in coastal and low-lying areas are expected to be affected annually in 2100.

On the agricultural front the report finds that some Asia-Pacific countries, including Indonesia, the Philippines, Thailand, and Vietnam, could see rice yields decline by up to 50 per cent by 2100 over 1990 levels, resulting in food shortages and a dramatic increase in the number of malnourished children in the region.

Unpredictable weather patterns and changes in temperatures will see food production in the region more difficult and production costs higher.

Sea-level rise will worsen flooding in the Mekong River Delta in southern Vietnam, which, in combination with a reduction in estuarine siltation due to dam building, will result in increasing loss of paddy and farming land.

A four degree Celsius (7.2F) increase in water temperatures will, the report says, result in the collapse of all coral reef systems in the sub-region due to mass coral bleaching. Just a 1.5 Celsius (2.7F) increase, the report warns, is expected to see 89 per cent of coral reefs suffer serious bleaching, severely affecting reef-related fisheries and tourism.

For the some 100 million people who rely on ecosystem services such as coastal protection and food security in the Coral Triangle — a marine region spanning the waters of Indonesia, Malaysia, Papua New Guinea, the Philippines, Solomon Islands, and Timor-Leste – home to around a third of the global coral stock and 76 per cent of all known coral species, the impact is likely to be significant.

The cumulative loss in value of reef-related fisheries in Southeast Asia for 2000-2050 is estimated at about $57.98 billion under the business-as-usual scenario, some $6 billion of which will occur in 2050.

Using a number of emission scenarios the Coral Triangle’s food provision capacity for coastal communities – who derive more than 35 per cent of their dietary animal protein from reef fish and seafood – is projected to be halved by 2050.

Climate change also poses a significant risk to health. Deaths related to vector-borne diseases such as malaria and dengue are expected to increase, with the World Health Organization (WHO) projecting up to an additional 500 malaria-related deaths in the region per year by the 2030’s.

As a result of increased migration brought on by areas becoming uninhabitable, cities will become more crowded overwhelming available social services. Energy supplies could be threatened, particularly in those countries that rely on thermal power plants (coal, oil, or gas fired) due to a scarcity of water for cooling, while uncertain water discharges will also see ‘intermittent performance’ from hydropower plants.

To mitigate the impact of climate change the report highlights the importance of implementing the commitments laid out in the 2015 Paris Agreement, in addition to:

Based in Manila, in 2016 the ADB approved a record $3.7 billion in climate financing and has committed to scale up its investments to $6 billion by 2020.

Stella-maris Ewudolu in Phnom Penh contributed to this this story