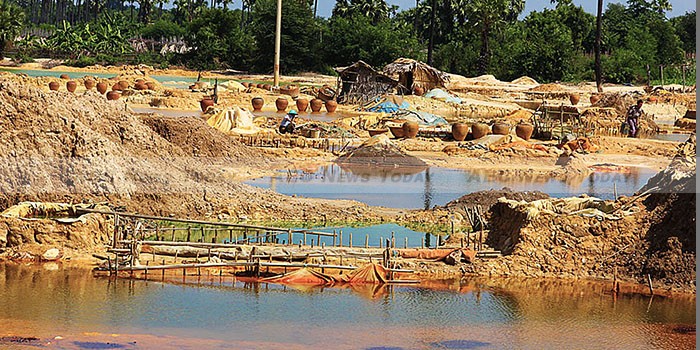 Following five decades of rule by socialist and military governments under which the country became one of the least developed countries in the world, a new chapter of Myanmar’s engagement with the international community was opened in March 2011.

While the previous regime denied that poverty existed in Myanmar the new government acknowledged the problem and made addressing it a key economic policy priority. A range of political, economic and social reforms under President U Thein Sein’s administration prioritised rapid legal transformation across sectors to make Myanmar a considerably more attractive investment destination. Reforms and openness have meant accelerated economic activity and an inflow of foreign capital seeking to exploit natural resources.

Foreign direct investment (FDI) in Myanmar is heavily dependent on natural resource-based industries, especially the hydropower, natural gas and mining sectors. Mining is the third largest recipient of FDI in Myanmar. Myanmar’s extractive industries exported approximately US$1.5 billion in the 2013–14 financial year, bringing in substantial revenue to the government.

In 2014 legal jade and gems sales at the annual Myanmar Gem Emporium’ market were valued at US$3.5 billion. But the estimated total jade sales — including through unofficial channels and particularly from Kachin State to China — were US$8 billion in 2011 alone.

Myanmar simultaneously faces three distinct types of challenges in mining project areas — conflict over land, violent opposition to resource exploitation, and environmental problems. In 2013, the Revenue Watch Institute in its resource governance index ranked Myanmar as the lowest out of 58 countries. While the government has committed to a range of reforms, these challenges will remain for the new government after the election in November 2015.

The most significant conflict over land is the Letpadung copper mining project in Sagaing Region which is a joint venture between China’s Wanbao Mining Company and the Union of Myanmar Economic Holding Company. While the former is a subsidiary of a Chinese state-owned arms manufacturing company, the latter is owned by the Myanmar military.

Faced with the confiscation of more than 2,832ha (7,000 acres) of farmland, the forced relocation of 66 villages, inadequate compensation and adverse environmental effects, the affected communities have resorted to widespread protests.

In the face of continued opposition the government appointed a committee led by Daw Aung San Suu Kyi to look into the project, which controversially endorsed it, albeit with some changes. The report further exacerbated tensions and conflict between the authorities and local communities, and the protests continue.

Regulations that govern Myanmar’s extractive industries have not been sufficient to protect Myanmar’s environment and rich bio-diversity. For example, the Environmental and Social Impact Assessment of the Letpadaung project, prepared by Australian consultancy firm Knight Piésold, states that acid and metals generation from waste rock pose an extremely high environmental risk to surface- and ground-water that cannot be mitigated.

Although Myanmar has accomplished some relatively easy reforms, it must now address some fundamental and much more difficult development challenges.

The country is currently ranked 150 out of 187 on the United Nations Human Development Index. A quarter of its citizens live below the poverty line, child mortality is higher than in comparable neighbouring countries in the region because of the lack of skilled health workers, and one-fifth of children in poor families are not enrolled in primary education.

According to the 2014 household census, the life expectancy of Myanmar and the level of access to clean water are the lowest in Asia.

Controlling Myanmar’s extractive industries such as minerals, oil and gas is crucial for the future stability of Myanmar. As the country has the potential to receive increased revenue from extractive industries it is important for the government to allocate benefits among states and regions systematically. Yet resource sharing across states and regions, as well as between the central government and sub-national governments, is one of Myanmar’s main constitutional challenges.

In June 2012 the Myanmar government signed up to the Extractive Industries Transparency Initiative (EITI), a global anti-corruption scheme that requires member governments to disclose payments earned from oil, gas and mineral wealth.

Under the EITI companies must publish payments made, while governments must disclose sums received and an independent administrator reconciles them. This should mean information about government revenues from Myanmar’s extractive industries and licensing processes will become more transparent in the future.

Most importantly, having ethical business partners in Myanmar’s extractive industries is crucial. Many of the mineral deposits are located in Kachin and Shan states where armed conflicts have displaced enormous numbers of civilians in recent years.

Soe Nandar Linn is a national consultant on public administration and finance management at the World Bank in Myanmar. The views expressed here are solely those of the author. This article first appeared on East Asia Forum under a Creative Commons license and is reproduced here with its permission.