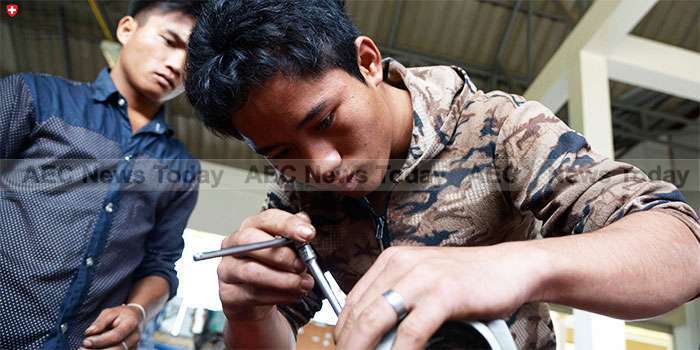 Thailand is facing an increasing shortage of skilled labour in key growth industries. Automotive, information communications technology (ICT), tourism, garment, and many more are suffering from a shortage of employees with sufficient skills to handle a world where technology is playing an ever increasing role. Not only are very few people participating in vocational training in Thailand, but an inadequate education system and bias against non-academic study is leaving Thailand graduates far from industry ready.

These were some of the key findings in a recent report compiled by the Singapore Management University (SMU), and global financial firm JP Morgan. New Skills at Work: Managing Skills Challenges in ASEAN-5 found that unless Thailand begins equipping its workforce with necessary science, maths and engineering skills; broadens the appeal of vocational education; and utilises private industry training, it will experience a deepening skilled labour shortfall across all industries.

The report reinforces a July 2015 survey of businesses by the office of Industrial Economics which predicted Thailand will see a 300,000 worker shortage in the manufacturing sector within the next five years. Combined with a study by the World Bank which found Thailand has one of the highest aging populations in Asia and the Pacific and it is evident there are serious challenges to be overcome if industry in Thailand can reach its potential. By 2040 the World Bank predicts that 17 million Thais will be 65 years or older and the working age population will shrink around 11 per cent.

Education is a key factor in the shortage of workers entering manufacturing positions and jobs requiring engineering, science and mathematics.

In a separate 2015 World Bank report, WANTED: A Quality Education for All, many Thai students were found to lack the skills and competencies needed in an increasing number of jobs.

The study found that in a 2012 Organisation for Economic Co-operation and Development (OECD) Programme for International Student Assessment (Pisa) reading scores, only one-third of Thai 15-year-olds knew the alphabet and could read. They also could not locate information or identify the main messages in a text.

In contrast, the average score for students in lower-income Vietnam was 66 points higher than Thai students, implying that on average a 15-year-old in Vietnam is approximately 1.5 academic years ahead of the average Thai student.

It is not only reading that needs improvement in Thai schools. Science, technology, engineering, and math (Stem) levels are also far lower than other Asian countries.

According to the latest Pisa scores Thailand ranked 47 out of 76 in math and science. Singapore was placed first, while Vietnam ranked 12th.

Within Thailand a 2015 Ordinary National Education Test (O-Net) showed maths and science to be Thai students least favourite subjects. Measuring students’ basic knowledge out of 100 in five key subjects saw an average score of 26.59 for maths and 33.4 for science. In a move which suggests Thai teachers are not qualified to teach maths and science, the Thai Education Ministry will require 20,000 teachers for students in grades 7-9 (Matthayom 1 – 3) to take an online aptitude test in April next year.

Education is not only in need of improvement in the lower years, a lack of quality training is seen in tertiary education as well. According to a recent article in the Bangkok Post only 35 per cent of Thai students are enrolled in vocational institutions and of this group, the majority are not considered to be industry ready. If Thailand is to raise it’s productivity and realise its ambition of becoming a high-income economy it must rectify the shortage of students with research, and engineering skills.

The poor technical and vocational education and training (TVET) is not only to blame. A large lack of interest in vocational study comes from a cultural bias towards a academic background. The result is shortages of skilled labour and an over supply of graduates in professions that are already saturated.

University is seen as the key to a respectable career in Thailand, as well as paying a good starting salary of Bt15,000 (US$429) per month for graduates with no practical experience. By comparison the guy welding the frame of your car together or tightening the bolts on your suspension might be earning as little as Bt9,000 ($339) a month.

From a status point the photo on the wall of a vocational graduate receiving his diploma from the head of the school is no-where near as prestigious as the one university graduates in Thailand get receiving their degree from a member of the royal family.

For parents the reputation of bloody brawls, serious injuries and even death is enough to see children steered to a profession, rather than a skilled trade. In a Vice report on Bangkok vocational schools, students from different vocational colleges are seen ambushing and fighting each other with clubs, knives, and guns.

The situation in the past has been so grim that CP All, operators of the country’s more than 9,411 7-Eleven convenience stores and part of the Charoen Pokphand (CP) Group, made a ‘sadvertorial’ for Teachers’ Day 2013 focusing on the violence and its tragic consequences (See: 7-Eleven Thailand’s Tear-jerking 2016 Thailand Teachers Day Sadvertisement)

In 2013 while Office of Vocational Education (Ovec) secretary-general, current Ministry of Education permanent secretary Dr Chaipreuk Sereerak blamed the low level of vocational education enrollments on the lower salaries paid to skilled workers on graduation and the low recognition factor Thai society awards to skilled labour as at the core of the problem.

“Traditionally about 30 per cent of the students entering vocational education have come from the lower end of the academic achievement ladder and many are from lower income households. Even though skilled workers trained in the vocational education system go on to operate million dollar pieces of equipment in the workplace, Thai society doesn’t give them the same recognition as a newly graduated accountant or lawyer,” he said.

“The work is sometimes dangerous, working conditions hot and dirty, and the wages low. We need to not only change the payments rates of skilled workers, but also change societies recognition of the worth of skilled labour. We also need to ensure our teachers are up-to-date with the latest processes, techniques, and methods”, he said. Nothing much has seemed to change.

The SMU and JP Morgan study calls for Thailand to increase emphasis on Stem and TVET education, create a strong national campaign to correct the prejudice against technical and vocational education, and for the government to provide stronger incentives for private industry’s to lead skill training programmes.

However, industry has already stepped up to the plate. One of the first industry initiatives aimed at addressing the skilled labour shortage in Thailand was introduced by the Technology Promotion Association (Thailand-Japan) (TPA) and Japanese university alumni in Thailand. In the early 90’s in an attempt to ensure a steady supply of skilled labour for the rapidly expanding Japanese industrial presence in Thailand they began developing an  ‘incubator’ to produce highly skilled, international standard engineers, and professional staff.

The Thai-Nichi Institute of Technology was established with the primary aim of producing better, smarter, more career ready, and creative graduates than the Thailand education system is producing. They have there work cut out for them though. In a 2013 interview Associate Professor Krisada Visavateeranon, president of the Institute, said “a lot of the students who come to us from the state high school system don’t have good mathematics skills. We have to retrain them so they can understand the mathematics necessary for the courses they are about to undertake.”

Thai vocational education students are placed with German companies and receive both on-the-job and formal education and training, delivering benefits to both employers and students. On satisfactorily completing their training they are offered a full-time job at the company at a salary higher than they would normally receive, while the company gains an employee trained to work to European standards.

With one report after another containing increasingly dire warnings over Thailand’s skilled labour shortage and little being done to remedy the problem, the availability – or lack of – skilled labour and the costs associated with attracting and retaining workers is going to become an increasingly significant component that manufacturers in Thailand will need to factor into establishment or growth plans.