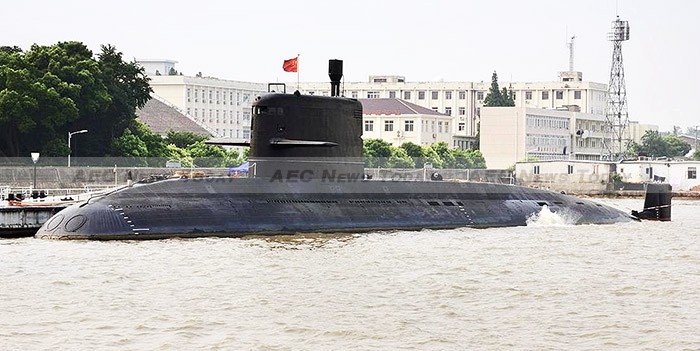 In June 2015 several announcements suggested that Thailand would acquire three Chinese submarines for 36 billion baht (US$1.03billion). But by mid-July Thailand Defence Minister Prawit Wongsuwon stated that the proposal would be deferred and subject to further review. While some commentators were quick to surmise that US diplomatic pressure had been applied, it is equally likely that the causes were conservative military spending and a longstanding bias toward land forces.China Navy <<<???

It is tempting to view a submarine purchase primarily through a geopolitical lens, given the interest in Southeast Asia’s trajectory in an era of great power rivalry. Thailand is of particular interest because of its close and longstanding cultural affiliations with China, its clear discomfort with US criticism since the  May 22, 2014 coup, and its absence of territorial disputes with China.

But in matters of Thailand defence spending and arms procurement there are other forces — unrelated to geopolitical alignment — that also need to be considered.

Many would see any Thailand submarine purchase as the military junta taking advantage of its position to increase defence spending. Historically this is often correct. After the 2006 coup the military’s budget jumped 47 per cent.

This would suggest that the 2014 junta is the Royal Thai Navy’s best chance to obtain the submarines it has been proposing since the 1990s and it is waging a determined campaign to get the submarine purchase over the line.

In response to the cabinet decision to defer the purchase it released a nine page document explaining the need for submarines. The document cites Thailand’s reliance on maritime trade, significant maritime resources and the possession of subs by other Asean nations as reasons why the submarine purchase should occur.

But the Thailand military can also be surprisingly tolerant of restraint in defence spending, especially during tough economic times. During the 1997 Asian financial crisis Thailand was amongst the first to slash defence spending, which included cancelling a planned F/A-18 Hornet procurement.

It was also one of the last countries to resume increasing its defence spending. One economic analysis some years later noted that Thailand’s defence budgets had fallen ‘disproportionately due to the slowdown in economic growth’.

And Thailand is indeed currently facing a difficult economic outlook. Its competitiveness in its traditional export strengths (such as rice) has been declining for some time, and it has suffered declining exports for three successive years. Tourism revenue has slumped since the 2014 coup and the economy is unlikely to grow by more than 3 per cent in 2015.

This is forcing the government to consider increasing taxes, even to the point introducing a co-payment for the immensely popular 30 Baht health care policy introduced originally by the government of Thaksin Shinawatra.

Unfortunately for the navy, financial conservatism will most likely affect its procurement proposals. The Thai navy occupies a subordinate position within the Thai military hierarchy, as the army has historically dominated Thailand’s military forces. The Thai army also continues to be the service that controls key political and official appointments. Many Thai prime ministers have been from the army, for example, but none from the other services.

As a consequence the Thai navy has long struggled for resources and influence. This is partly due to the strategic prioritisation of the army, but it is also due to the lasting effects of inter-service rivalry and politicisation.

In 1947 the Thai navy found itself on the wrong side of a domestic political power play. Navy elements had supported Pridi Phanomyong but were defeated by the army supporting Phibun Songkram, who later became prime minister of Thailand.

Since then the navy has experienced only brief periods of prominence, such as during the 1990s. In the wake of the 1992 Black May massacre of protestors the Thai army lost significant standing.

As a result, maritime force development, strategy and priorities received an unusual degree of attention. The navy was allowed to purchase an aircraft carrier, the Chakri Naruebet and a few fixed wing strike aircraft. Plans for submarines and a further naval base were announced. But the 1997 financial crisis largely ended this golden period of expansion.

If Thailand does proceed with a Thailand submarine purchase from China, it would be sensible to keep in mind that Thailand has bought a considerable volume of arms from China — including frigates and patrol boats — over the years. The key factor here has been price. This underscores another longstanding characteristic of Thailand defence policy: a presumption of ‘good enough’ in defence procurement.

Thailand defence objectives are generally to provide an armed force capable of offering a deterrent, rather than to develop a force with a significant capability edge. Chinese submarines are not necessarily a geopolitical concern.

While some Thais have started to register the tensions in the South China Sea as a long-term security issue, most do not. Thailand has no direct stake in this dispute. But the military junta’s legitimacy is already wafer thin. It may be that the regime just considers the unpopular Thailand submarine purchase to be burning precious political capital for little reason.

This article was written by Greg Raymond, a research associate at the Coral Bell School of Asia Pacific Affairs,  Australian National University. His PhD thesis on Thailand’s strategic culture is currently under examination. This article first appeared on East Asia Forum under a Creative Commons license and is reproduced here with its permission